China increasingly sees its flagship foreign policy project as a tool for restructuring global governance and a vector for promoting a new form of globalization. 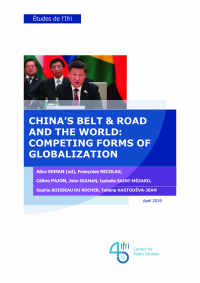 The project known as the “Belt & Road Initiative” (or “Chinese New Silk Roads”, or “One Belt, One Road” – referred to as “B&R” in this report), launched in autumn 2013, is one of President Xi Jinping’s priorities. He has placed the concept at the heart of China’s domestic and foreign policy. The project could even remain relevant until 2050, the centenary of the People’s Republic of China (PRC) -  major deadline for the Chinese Communist Party (CPC). Although the project raises concerns due to its geographical scale (more than “130 countries and international organizations” are supposed to be involved – according to the latest official statements) and sectoral reach (transportation, energy, telecommunications, finance, tourism, culture, digital, space, among many other sectors), it is mainly characterized by its methodology, which is uncommon. First, the concept was launched before its concrete content was defined, and China’s partners were and still are frequently encouraged to provide ideas to the Chinese government on how to make it concrete. Second, it is difficult to identify a project that has been launched by a state in recent decades with so much determination, and so much investment in its national and international promotion, and yet with so much ambiguity. Third, the project, which is constantly evolving, is promoted in accordance with communication and implementation methods usually used in China, but never on this scale internationally. Faced with the novel approach and speed with which the project has gained in awareness and importance, many foreign countries appear unsettled.

B&R methodology has been more scarcely analyzed than its content until now, but it is essential to analyze this unusual methodology so as to inform the strategic analysis of the countries that the Chinese project may involve, and to help them identify a suitable methodology for addressing and responding to it. In addition, B&R transport infrastructure projects have been the focus of many studies and reports, but the non-physical infrastructure projects of B&R (institutional, normative, digital, etc.) are still comparatively less taken into account. Still, it is essential to analyze them as they are currently developing and are, from Beijing’s perspective, as important as – if not more important than –  the physical projects. These two areas of analysis are therefore significantly developed in the report.

The objective of this report is not to examine specific projects, which have been the subject of many previous publications – including by Ifri’s research team – nor to list the B&R projects at any given moment. It is rather to analyze the approach developed by China during the last six years, since the project’s launch. Although the Chinese project remains unclear in many respects, the analysis can now be refined given the time that has passed since its launch.

Therefore, this report provides some clarification regarding the Chinese approach – the objectives, but also the implementation methods and the general methodology used (section I) – in order to identify and analyze the risks and opportunities that it poses. Taking this methodology into account is particularly useful in understanding how foreign actors may respond, now and in the future, to B&R.

The French and European approach – those of governments as well as the private sector (section II) – as well as the reactions to B&R of key countries, such as the United States, Japan, India, Russia, Singapore and other southeastern Asian countries are also examined (section III).

Based on this analysis, three scenarios for developing the Chinese project are established (section IV): 1) continuous development of B&R creating a new form of globalization, 2) continuous development of B&R clashing with other forms of globalization: return of international bipolarization, and 3) slowdown and decline of B&R. In conclusion, general recommendations (section V) are made with regard to the most suitable approach to be adopted in view of the rollout of the Chinese project in the coming years, in accordance with the envisaged scenarios.

The scenarios are at the core of this report. The report was designed from the beginning as an ongoing exercise of reflection and forward-looking analysis, and was fueled by five brainstorming sessions in Paris, which involved, in addition to the research team, various French actors directly affected by the Chinese project (representatives of different ministries and companies, in particular). These sessions served to discuss the issues and different perceptions held by the institutions represented.

The analysis was also developed based on the examination of Chinese publications on the subject (government action plans, news articles from the Xinhua News Agency, think tank articles and university publications). Most of all, the analysis is based on various field missions conducted in China during the period 2013-2018, and in other Asian countries and Europe during the period 2017-2018. Particular attention has been paid to discussions with Chinese representatives on the one hand and European representatives on the other.

This report is designed as a brainstorming exercise in itself, seeking to identify the blind spots and possible developments of the Chinese project, and the issues of importance for foreign countries when responding to it. We hope that reading the report will raise new questions and encourage readers to continue their reflection in the same spirit as that which drove this work. The authors welcome questions and comments.

This research project has benefited from the generous support of the Conseil supérieur de la formation et de la recherche stratégiques (CSFRS). The report has been translated and updated from the a previous report published in French in October 2018 (“La France face aux nouvelles routes de la soie chinoises”).