Europe’s energy policy is commonly defined by three axes of equal importance: security of supplies, competitiveness and sustainable development. The European Commission is mandated to develop the policy tools that allow the implementation of this common policy. Early on, challenges arose from the trade-offs to be made not only between these three pillars but also between a common European policy and national approaches. The European Commission has always had to struggle in attempting to keep a balanced line. 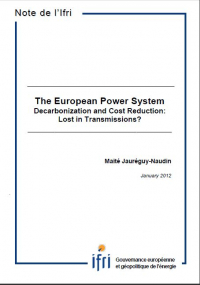 Over the past twenty years, the EU has been engaged in the liberalization of the electricity and gas sector. For a long time, liberalization was the main objective of European energy policy. Liberalization of the electricity sector was supposed to bring many benefits. Foremost, these included the more efficient allocation of generation and transmission capacities, and the enhancement of the competitiveness of the European economy as a whole, through lower energy costs. The trading of electricity output between countries was part of this strategy. Interconnections are vital to facilitating electricity trade between Member States. It is in this context that interest in cross-border interconnections has increased. However, new constraints have emerged and have put climate change at the top of European agenda.

In December 2008, as part of the fight against climate change, the European Union adopted its Energy and Climate package endorsing three objectives for 2020: i) a 20% increase in energy efficiency, ii) a 20% reduction in GHG emissions (compared to 1990), and iii) a 20% share of renewable energy sources in final energy consumption. A direct consequence of the later objective is that renewable energy sources (RES) in electricity generation are expected to expand from 20.3% of electricity output in 2010, to around 33%, in order to meet the objective set by the European Commission. Hydroelectric power has limited additional potential due to geographical constraints. Wind energy is expected to provide most of the extra renewable energy required in electricity generation to meet this objective. Even though photovoltaic electricity production is less mature than wind energy, this technology is also strongly supported by new energy policies. Overall, the variability of these intermittent technologies can be dealt with by interconnection capacities, to a certain extent. Strong interconnections between neighboring countries are crucial for greater wind-power and solar penetration in the European system.

A quick overview of European energy policy over the past 15 years shows that rationales for interconnections have evolved as new concerns have reinforced their importance. Originally they were seen as an instrumental part of the liberalization process. They are now considered as key to move renewable electricity across Europe. One immediate implication is that the building of new interconnection lines is no longer driven by the circulation of electricity related to production costs, but rather by policy objectives which aim to transport electricity produced by intermittent renewable energy sources (and not low carbon energy sources that would include nuclear power). The objective of the Internal Electricity Market is to bring competitive electricity prices to end-users, but as these prices are linked to the composition of the power generation mix, it is easy to see that there is a clear discrepancy in the rationales pushing for corridors aiming at transporting RES across Europe and a market-driven logic that will favor the building of transmission lines based on a competitive power generation mix.

The lack of consistency between European objectives could endanger the balance between the three pillars of European energy policy. Indeed, if the network is not upgraded in time, development of RES will not yield significant benefits in GHG emission reduction, as countries will have no choice other than to develop and to rely on fossil fuel capacity to deal with intermittency. An objective on capacity production, such as the European objective on the share of RES in final energy consumption, without a strategy to develop these links is bound to fail. In this sense, the submission of the infrastructure package in November 2010 is an important step forward. However, it does not address the full complexity of the problem as the allocation of generation capacity remains essentially national, while a discussion on a European energy mix, as a collection of national energy mixes, is not possible at the EU level. There is still an important missing link arising from the fact that the specificity of national energy mixes, and in particular their competitiveness, are not acknowledged. The European objective on RES requires a broad vision that would adequately prepare the European network to receive a massive amount of energy from wind power. But this should be done in a way that is socially and economically acceptable.

There are no technical limits to the extension of a power network. Limitations remain essentially political, economic and physical. National strategies prevailed during the development of the European network and they will continue to override a European vision, as long as Member States refuse to discuss a power generation mix (as a collection of national energy mixes) at the EU level. If coordination between Member States remains at the minimal level witnessed today, there are few chances that a low carbon and cost efficient internal European grid will emerge. A strategy on transmission, however ambitious it is, is bound to fail if it is not part of a broader vision able to clarify the trade-offs to be made in indicating how the benefits (social & environmental) and the costs could be shared among all actors. An intermediate solution would be a bad compromise, as it will amplify all the disadvantages of RES development, including the need to develop back-up capacities, interconnection costs, and the persistent need for subsidies such as Feed-In-Tariffs (FITs). At the same time, it will not yield its benefits, including a higher penetration of RES that would replace higher GHG energy sources, the smoothing of intermittency, and congestion management.

Important decisions are taken at the national level without cooperation or coordination with neighboring countries. This is true for the establishment of the NREAPs, but also for decisions regarding the structure of the power generation mixes. The fact that Member States are sovereign with regard to their energy mixes should not prevent them from coordinating major decisions, such as a significant reduction of generating capacity, as has been the case in Germany but also in Belgium and in Switzerland. The measures that are planned so far to replace nuclear power in these countries are highly hypothetical (the pace of expected benefits from energy efficiency improvements) or costly (development of renewable energy sources at a time when they are still far from markets). This will probably lead in the short and medium term to the development of fossil fuel power plants, which will have an impact on GHG emissions, pushing the CO2 price up on the European market. This in turn will translate into higher electricity prices.

Interconnections have many benefits but increasing the dependence on them from a national point of view creates risks elsewhere. Indeed, their efficiency and reliability also depend on what happens in other markets. Decisions might be national, but the system is European. Furthermore, interconnections take time to build. It is not certain that they will be ready in time to receive and transport power produced by wind farms in the North or PV panels in the South. Already, price spikes occur as soon as most of the available capacity across Europe is used. Volatility of electricity prices could increase if the development of interconnection does not meet the growth of renewable energy sources.

Priorities of European energy policy have shifted from a market-driven approach to policy objectives. The de-carbonization of the power sector, RES deployment and the development of interconnections are all tools that are to be implemented to answer the three pillars of European energy policy. However, the tools seem to have become goals in themselves. This could already be observed with the objective of RES development that has been reinforced, though it has not yet led to significant benefits in terms of GHG reduction, although it is one of the priorities of EU energy policy. But, RES development has affected the rationales for interconnections. An immediate consequence is that European energy policies seem to be heading for a significant increase in electricity costs.

The lack of coordination between all actors involved will definitely lead to underinvestment. The EIP Blueprint attempts to improve the regulatory framework to speed up authorization processes and to limit the delays that have been observed so far in the completion of cross-border interconnections, but this requires a transfer of decision-making from Member States to the EU. Only the resolution of the shortcomings listed above could encourage Member States to give up part of their national prerogatives. Furthermore, the provision aiming at overcoming local opposition to the building of interconnections will certainly clash with existing environmental regulations. Too many voices still have the power to block the construction of interconnection lines.

The pace of RES deployment and interconnection development are significantly different. So too are the lifetimes of generation capacities (about 30 to 50 years), and of networks which are longer still. The fight against climate change requires urgent action, but if Europe does not succeed in developing an appropriate framework that will favor the de-carbonization of the power sector, which involves a low carbon energy mix and a transmission network that is able to transport low carbon energy sources at a cost that is socially acceptable, then there is a huge risk that decision-makers and investors may prefer to ignore the long term consequences of global warming.

Turkey's Method in the Mediterranean : The Hold over...

Land Governance in the Outskirts of African Cities....