Governing the Geostationary Orbit: Orbital Slots and Spectrum Use in an Era of Interference Notes de l'Ifri, January 2014

Outer space, particularly in the telecommunication sector, is benefiting and becoming accessible to more and more actors. But with this trend comes also a reality that is every day more compelling: no meaningful development can be achieved without a clear, stable and predictable interference-free environment for the use and control of all satellites that depend upon ready access to radio frequencies and appropriate geostationary orbital slots to function properly. 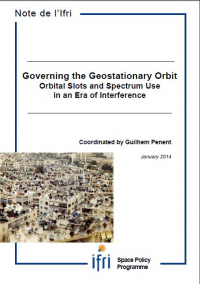 The increasing incidence of harmful interference these recent years, including intentional ones implying a deliberate purpose to obstruct reception of specific information against which no technical efficient counter measure exists, is putting in danger this capacity to continue operating safely. Despite itself, the International Telecommunication Union (ITU) in charge of the rational, equitable, efficient and economical management of the orbit spectrum resource is increasingly becoming a permanent battlefield between opposing interests. And the ability of this specialized agency of the United Nations to remain aloof from broader political issues is now being challenged on a regular basis.

In the face of such a worrying development, the costs of non-action can only be but prohibitively high as noted by Frank Asbeck, Special Adviser for Space and Security Policy to the European External Action Service (EEAS), in the preface to the topic of the book. While paying tribute to efforts that aimed at elevating public awareness concerning the illegal jamming of satellite transmissions, Mr. Asbeck insists on the importance this issue has for the European Union from a human rights as well as space security point of view.

The present book aims at placing the issue of the orbit/frequency governance at the heart of the European political agenda. It is the main outcome of a one half-day workshop on “Orbital Slots and Spectrum Use: a Governance Outlook” held in Paris (France) in April 2013 whose objective was to establish a precise diagnostic of the situation. To this end, both the functioning of the current system of governance and the reasons and processes explaining why the system might be deteriorating were discussed by recognized academics and experts, as well as representatives from space agencies, national and international regulatory entities and satellite fleet operators.

As manifested repeatedly in the contributions contained in this study, at least three main areas of interests require further focus: 1) the need for a large understanding and awareness of the issue of harmful interference with, notably, a better knowledge of the difference between the different types of interference, be they internal to the satellite network or external, deliberate or unintentional; 2) the need to improve the ITU process by giving it some ability to confirm the source and nature of frequency jamming and take informed actions and decisions that would be more compulsory in nature; 3) the need to consider the broader legal regime and the relevance of other instruments.

The study itself is divided into three parts. Following some preliminary comments on the ITU regime and its evolution over the years with regards to the use of radio frequencies and orbits, the first section on “Getting into the Picture: Satellite Communications Today” captures the basic debate on satellite communications from a legal and political point of view. It is opened by three authors focusing on the different contexts surrounding the issue of harmful interference.

While Xavier Pasco identifies the key historical trends behind the transformation of the satellite communications activity from the early days and their consequences on the whole collective governance issue, Tanja Masson-Zwann investigates in details the ITU regime and the space law regime and finds the latter better suited for solving today’s politically-motivated cases of intentional harmful interference. These are also the subject of the next article by Guilhem Penent on the historical debate of whether states should be given the right to interfere deliberately with the flow of information coming across their borders.

The second section, entitled “Increasing Harmful Interference, a Rationale for Action?,” gets to the heart of the topic and highlights the different definitional issues at stake, while laying at the same time the foundations of an informed conversation between some of the main concerned actors. In particular, it establishes the relevant issue areas for harmful interference in respect to satellite communications and draws attention to some recent initiatives proposed to better enforce existing provisions at the ITU.

In a welcome move, the two first contributions, by Claire Jolly and the European Satellite Operator’s Association (ESOA), explore the complexity of satellite signals interferences by analyzing and discussing both the context, different types and possible sources, and the difficult but vital question of the assessment of the intent in the “harm.” Although unintentional interference is the most frequent and must not be overlooked, intentional or targeted interference, including pirate transmissions, is on the rise and raises special and unique challenges for which the ITU is not necessarily well equipped.

The main reason, as recalled by Philippe Achilleas, is that intentional interference hovers at the interface between telecommunications law, defined as the law of networks, and freedom of expression, presented as the law of content. Though victims of such practices can choose to act by means of the mechanisms related to human rights, should they bring the case before the ITU, they will witness several initiatives taking form to improve the efficiency of current mechanisms of dispute resolution. According to Laurence Ravillon, these efforts involve both the downstream recourse to more formal dispute resolution methods, and the upstream implementation of an independent monitoring system.

What has been lacking until now is a genuine perspective coming from the main actors, including the relevant regulatory body having jurisdiction over satellite interferences and the three larger fixed satellite service operators. ITU"s response to the increasing number of cases of harmful interference is thus discussed by Yvon Henri of the Radiocommunication Bureau (BR) in the context notably of the last World Radiocommunication Conference. As for the fleet operators, Paris-based Eutelsat naturally places emphasis on deliberate jamming for which it has suffered greatly since 2009 in its home territory of Europe, the Middle East and Africa. Like its slightly larger Luxembourg neighbor, Intelsat, SES concern is much more focused on unintentional interference and current initiatives created to mitigate its effect as in the case of the Satellite Data Association (SDA).

One issue that has started to draw the worried attention of the entire space community has been the growing interference between terrestrial networks and satellite signals. In a useful attempt to effectively explore the hidden dimensions of the issue, Alain Austruy suggests several avenues for reflection with regards to the allocation and coordination in the frequency bands below 6 GHz within the European context.

The third and final section helps put the topic into perspective by offering three opinions on “Satellite Communications and Space Governance in the Coming Years,” three steps toward a better understanding of ITU"s role. Victor Strelets, one of the twelve members of the Radio Regulations Board (RRB) of the ITU, provides a defense of the current international regulatory framework and its merits, including its adaptability. Sergio Marchisio acts as a bridge by reminding us that the ITU regime is not self-contained, but should be interpreted in close connection with the general principles of space law and international law. Gérard Brachet takes this opportunity to discuss a series of converging international initiatives for the safety and sustainability of space activities, all relevant to harmful interference.

Finally, the conclusion outlines the essence of the different issues discussed in the book and attempts to make explicit the different logics behind harmful interference in space telecommunications on the basis of a power-oriented approach.

Governing the Geostationary Orbit: Orbital Slots and Spectrum Use in an Era of Interference
Download
1.54 Mo
Keywords
global governance Satellites Space Telecommunications
ISBN / ISSN:
978-2-36567-238-2
Print this article
Back to top

Building Bridges over the Blue Pacific. Beyond Marine...
END_OF_DOCUMENT_TOKEN_TO_BE_REPLACED
Asia after the War in Ukraine: Re-imagining multilateralism and the risk of...