During his term in office (2012-2020), Prime Minister Shinzo Abe sought to demonstrate Japan's high level of interest in Africa, including by pledging a total of $ 60 billion in financial support at the 2013 and 2016 Tokyo International Conference on African Development (TICAD) summits and announcing his vision for a “Free and Open Indo-Pacific” (FOIP) at the TICAD-VI in Nairobi. 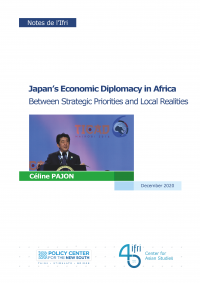 However, Shinzo Abe does not have any specific ties to Africa. He simply set out his government’s strategic priorities as part of its African policy.

The initial aim was to revitalize Japan's economy by seeking out international growth drivers: in 2013 Africa was undergoing rapid economic expansion. The priority was to substantially mobilize private investors and for Japan to catch up with other Asian and Western actors in the African market. Therefore, Tokyo sought to move from a policy focused on official development assistance (ODA), whose budget has been continuously shrinking, to a private-investment-based approach via a series of incentives deployed as part of its economic diplomacy.

Shinzo Abe also wished to mark Japan's return to the international stage through intensive diplomatic activism. Systemic rivalry with China, which intensified after 2012, has become a key factor in its foreign policy. Beijing has been Africa’s main trading partner since 2009, and its political influence on the continent has been extending with its rollout of the Belt and Road Initiative (BRI) from 2013. In this context, Japan has been seeking to regain lost ground vis-à-vis China by offering an alternative, mainly through its vision for “a Free and Open Indo-Pacific”.

In 2020, however, Tokyo's investment objectives in Africa do not seem to have been met and there is significant disparity between the political rhetoric and local realities. Although progress has been made, Japanese companies are very reluctant to invest in a continent, whose problems they are unfamiliar with and that seems distant and risky to them. The government’s administrative guidance towards business appears to have reached its limits in Africa. In these conditions, the rhetoric on rivalry with China is also proving difficult to maintain.

The TICAD VII summit (2019) could mark the end of a cycle, by highlighting the Japanese government's difficulties in mobilizing a large volume of private investment in Africa over a short period of time. The government’s economic diplomatic strategy (in its commercial and geopolitical aspects), originally designed for Asia, have had difficulties to adjust to the African context. In particular, the political rhetoric has tended to frame Japan-Africa cooperation in the context of strategic rivalry between Japan and China, however, this rivalry is quite different in the Asian and the African contexts. This rhetoric has created expectations and distorted the reality of Japanese cooperation in Africa, that is based on caution and as part of a long-term strategy.

Therefore, Japan could revert to a more pragmatic approach, foregoing its ambitious pledges, and focusing instead on measures to build a solid investment base in Africa in the longer term.

Higher Renewable Energy Targets in Germany: How will the...
END_OF_DOCUMENT_TOKEN_TO_BE_REPLACED
Is the UN Security Council still relevant? France and Japan's views on the future of...