Japan has been steadfastly promoting the development of its hydrogen economy at all levels: political, diplomatic, economic and industrial. It is yet to be seen if this excitement can be turned into a credible, cost-effective and large scale deployment. 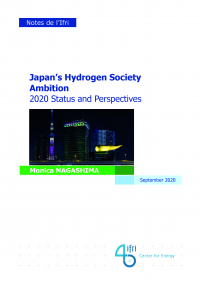 The strategy has a supply side, transport and end-use side which are all actively being pursued through pilot and large scale projects involving a number of Japanese companies and increased public funding. Japan’s hydrogen energy ambition is an industrial endeavor aimed at fostering technological innovation. The domestic energy policy has so far left little room for clean technologies (other than nuclear), choosing to prioritize nuclear energy and fossil fuels instead in the long term. While the importance of decarbonized hydrogen production is communicated through the strategy, this must not become an afterthought, as decarbonization is the only property that makes hydrogen marketable. The strategy is also not prioritizing applications in some hard to abate sectors, such as air transport or heavy industries, and focuses rather on sectors where electrification (and decarbonization through renewables) could be more preferable.

Japan is a hydrogen frontrunner in terms of mobilizing research and development (R&D) across various sectors and has successfully completed many first of a kind demonstrations. It remains to be seen whether hydrogen will be the preferred fuel for shipping, while there are high expectations for ammonia and organic carriers. Ambitious targets in power generation and fuel cell vehicles (FCVs) appear questionable though, meeting the thermal generation targets could require between 100 to 1,000 times higher volume of hydrogen than the demand of 800,000 fuel cell vehicles, which constitutes in itself an ambitious ten-year goal given that circa 3,700 FCVs have been sold in six years. The international hydrogen value chains that Japanese stakeholders are exploring in view of meeting the bulk of domestic demand are more interesting in combination with the development of clean hydrogen, notably via the use of carbon capture and storage (CCS) or low carbon electricity electrolysis. Overall, despite a high energy price environment in Japan, the competitive edge of hydrogen will prove challenging to materialize, especially in a low cost oil, gas and coal environment.

Japan still needs to decide what greenhouse gas (GHG) trajectory it will take in the coming two decades, and whether it wants to give priority to its economic short term competitiveness over longer term environmental and international benefits. Current policy dynamics in Japan give a smaller voice to the proponents of an environmentally friendly policy compared to the interests of the industrial sector, which has been sounding the alarm over higher energy prices in Japan and now more recently, over the consequences of the COVID-19 recession. As an example, discussions around a carbon price are nowhere close to consensus. An encouraging sign for clean technologies has been the recent government announcement on the phase out of inefficient coal and a statement by Minister of Economy, Trade and Industry (METI) in July. As a result, it appears that Japan will deepen deliberations on making “renewables the main power source”. It remains to be seen to what extent this shift will be reflected in the 2021 revision of the Basic Energy Strategy, which will shape Japan’s energy mix for the next decade and beyond. The current (2018) Strategy gives renewables a 22-24% share of the electricity mix compared to a greater 26% share of coal by 2030. Without a coordinated policy and business direction towards economy-wide decarbonization, especially in a context where even the more mature renewables struggle to gain a foothold, it is hard to see a business case for clean hydrogen and fuel cells in the near future.

At a time when the European Union and its Member countries are coming up with ambitious clean hydrogen strategies and sector coupling plans – with large state driven funding soon available, considerations on raising internal carbon prices and the development of a carbon border adjustment mechanism – Japan could reconsider its options. Failure to advance its decarbonization could ultimately lead to trade tensions with the European Union and constrain its industrial leadership ambitions globally.