The Politics of Amnesty in the Niger Delta : Challenges Ahead Notes de l'Ifri, December 2010

Armed groups, many affiliated to the Niger Delta-wide political organisation MEND, the Movement for the Emancipation of the Niger Delta, proliferated throughout the oil producing states, particularly from early 2006 onwards. In January 2006, MEND declared war on the oil industry pending the resolution of long term political grievances relating to poverty and underdevelopment, the poor regulation of an environmentally polluting oil industry, and the alienation of local people from rights to land and resources in the Niger Delta. 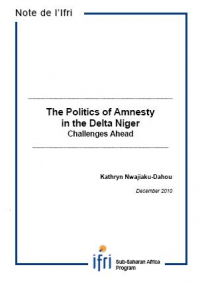 Attacks on oil industry infrastructure, the kidnapping of expatriate oil company personnel and the illicit tapping and sale of crude oil became stocks in trade of armed militia, many with political as well as pecuniary objectives. Their actions significantly dented the Nigerian government's revenue base, which relies on oil and gas sales for some 90 per cent of its forex earnings. Some estimates point to losses of 100 billion dollars to the Nigerian treasury between 2003-2008 as a result of conflicts. By April 2009, crude oil exports had fallen to 1.6 million barrels per day (bpd) in March 2009, down from 2.6 million in 2006.

In April 2009 the idea of an amnesty for armed ‘militants' was first mooted by the late Nigerian President Umaru Musa Yar'Adua in power since May 2007, but met with a less than positive response from most militant quarters. It was followed up in May 2009 by a full scale aerial military bombardment of Gbaramatu and Escravos in Delta state, a key militant stronghold and close to offloading platforms of Shell and Chevron. The attack left up to 1 000 people dead, most of them ordinary civilians and many more injured or rendered refugees. The offer of an Amnesty or ‘Presidential Pardon' for ‘repentant militants' was officially made on 25 June 2009. For a 60-day period between 6 August - 4 October 2009, ‘militants' who surrendered their arms, ‘renounced militancy' and registered with the government were to be eligible for inclusion in an ‘Amnesty programme' for rehabilitation and reintegration which included monthly allowances and training. Initially reluctant, one by one key militant leaders from and affiliated to MEND, signed up for the deal. Yar'Adua's amnesty offer was a way of buying out militants and making it pay NOT to attack the oil industry rather than vice versa. The Federal government essentially took over responsibility for paying ‘the salaries' of ex-militants and affording their leaders the opportunity to do ‘legitimate business' by awarding them state contracts and substantial bonuses, and thereby incorporating them into the apparatus of state. With elections around the corner, for all the hopes it raised, the amnesty was essentially a short term strategy for taking militants out of the creeks and minimising the potential damage they could cause around election time.

The Amnesty spearheaded a significant lull in hostilities, a noticeable decline in attacks on the oil industry and substantial increases in oil generated income for the Nigerian treasury. Yet for of the first year after militants had surrendered (some of) their arms and declared an indefinite cease-fire (September 2009), little progress was made on the amnesty rehabilitation and reintegration front. The long term illness of the principle architect of the Amnesty, President Yar'Adua, who had become critically ill by November 2009 and was absent from the country for some three months, but had also ‘saddled' himself with overall responsibility for the programme's implementation, meant that little movement (of funds) was possible without him. In February 2010, Vice President Goodluck Jonathan, the former Governor of the mainly Ijaw oil producing Bayelsa state, replaced Yar'Adua first as Acting Head of State, and in May, upon the latter's death, as President of Nigeria. This was the first time a ‘minority' from the Niger Delta, and an Ijaw at that, had occupied the post.

The article examines what has happened to militants and militancy in Nigeria's oil producing Niger Delta since the introduction of the Amnesty and in particular in what ways the arrival of Goodluck Jonathan's presidency has reshaped the post Amnesty programme. The paper is divided into three main sections; the first provides a summary of the Amnesty package and assesses the extent of its implementation, the second highlights the principle challenges facing it, whilst the third concluding section reflects on what Jonathan's presidency and the likelihood that he will run for Presidential office in 2011 portends for the future of the ‘post Amnesty peace settlement'.