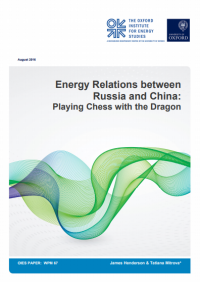 Russia's relationship with China has a long and complex history, catalysed by the lengthy border between the two countries, the complementarity of their economies and the ambitions of both to be seen as key global geo-political actors. Following periods of tension and friendship in the Soviet era, when the two communist states often struggled to find a mutual understanding, the post-Soviet era has seen a more complicated relationship develop based as much on economic reality as political ideology.

Russia's economy has suffered collapse and recovery, often driven by oil price volatility, and has yet to achieve much-craved stability and consistent growth. China, meanwhile, has genuinely become an economic superpower, having enjoyed growth rates in the 7-15% per annum range since the mid-1990s and has now become the second largest economy in the world in terms of nominal GDP.

China's rapid economic growth, which has largely been based on industrial expansion, has also seen it become, since 2009, the world's largest energy consumer, with total primary energy demand in 2015 of just over 3 billion tonnes of oil equivalent. The geographical accident that China is also located next to the world's largest owner of fossil fuel reserves means that a commercial relationship based on energy was bound to emerge, and the development of ties between the two countries based on oil, gas and coal trade has generated significant interest and discussion. In particular over the past decade, as Chinese energy imports have increased rapidly while Russia has sought new markets for its key commodities, the issues of inter-dependency, reliance and security have been at the forefront of the debate.

This paper aims to contribute to the literature on the Russia-China energy relationship by providing detailed evidence of activity in the post-sanctions period, a comprehensive review of recent negotiations and transactions, and an assessment of the current state of the balance of bargaining power and cooperation between the two countries.

This content is available at the Oxford Institute for Energy Studies' website: Energy Relations between Russia and China - Playing Chess with the Dragon

The Political Economy of the Metaverse
END_OF_DOCUMENT_TOKEN_TO_BE_REPLACED
Critical minerals: How to secure stable and resilient supply chains? Views from Europe...