Western armies today face a triple challenge. First, they have been involved in “wars amongst populations” for twenty-five years, having to cope with failed states, fractured societies, and irregular adversaries. Counterinsurgency (COIN) may be out of fashion, but stabilization operations remain as complex as ever. Whether for maintaining peace or countering an insurrection, military intervention cannot deliver victory on its own, yet other “global approach” actors are often either absent or ineffective, not to mention the lack of political support and the constraints posed by permanent pressure from the media.

Meanwhile, Western forces must retain the ability to conduct high-intensity operations when fighting symmetric or hybrid adversaries that benefit from training and advanced weapons. The constituent parts of military transformation tend to spread to regional powers. Accordingly, our defense systems have to stay in the technological race and incorporate into their equipments and doctrines the multiple innovations fostered by progress in intelligence gathering and miniaturisation (sensors, networks, robotics, precision ammunition, etc.).

Remaining full spectrum is also a challenge as our militaries face unprecedented constraints in terms of numbers and budgets. in addition, operational tempo has increased and enemies have toughened. The armed forces are thus being asked to achieve more with less. The political and budgetary context, especially in Europe, is likely to limit the size of militaries and the conditions of their use. It is therefore necessary in the short term to offer solutions for optimization and set the stage for a necessary military build up in the future. Established within Ifri’s Security Studies Center, the Defense Research Unit - LRD’s analysis focuses on French forces first and foremost, as well as the militaries of their main allies.

While Russia’s invasion of Ukraine on February 24, 2022, has underlined the need to upgrade the European armed forces, the urgency of the fight against climate change—as illustrated by reports from the Intergovernmental Panel on Climate Change (IPCC)—requires the political...

After twenty years of counter-terrorism, the Ukrainian battlefield marks the renewal of so-called “high-intensity” warfare. It constitutes a major strategic turning point, reversing the contemporary model of wars involving the West.

On 24 February 2022, Russia invaded Ukraine. Moscow’s initial plan was to use a “shock and awe” approach to conquer Kyiv quickly.

By: Laurent BANSEPT, Elie TENENBAUM
Nearly a decade after its successful war against terrorism in Mali, France is now in the process of turning a page in its military history in Africa. The upcoming end of Operation Barkhane, scheduled since the spring of 2021, comes, however, in a particularly deteriorated strategic context.<...>
Publications - Études de l'Ifri - Focus Stratégique
Security and Defense - Defense Research Unit - Sub-Saharan Africa

Towards a War of Norms ? From Lawfare to Legal Operations Focus stratégique, No. 108, April 2022

Defined as the use of law to establish, perpetuate, or change power relations in order to counter an adversary, lawfare practices reflect a reality that is inherent in international law.

The Military Use of Small Satellites in Orbit Briefings de l'Ifri, March 4, 2022

The number of small satellites in orbit has increased rapidly over the last decade, and the growth of this sector is expected to accelerate even more in coming years.

French Special Operations What Is Their Role in the Context of Great-Power Competition? Briefings de l'Ifri, January 27, 2022

The year 2022 marks thirty years since the creation of the Commandement des operations spéciales (COS, Special Operations Command). Those three decades have been dominated by missions carried out in volatile environments, most often against irregular adversaries, primarily terrorist groups.

Landpower has long been dissociated from "strategic forces", as these generally refer to long-range and/or high-yield strike capabilities.However, the recent military commitments contest this notion and highlight the current and future strategic value of landpower.

This event will cross various perspectives on the strategic rationale behind capacity-building efforts, assess current and future challenges to those endeavors, and provide an overview of how the European Union and France implement it in the field and in... 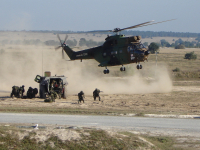 Lessons Learned from Twenty Years of Air and Land Operations

The Armies facing the Web

Al-Qaeda: The End of Terrorisms?

An event to the attention of Ifri's corporate members, by invitation only

By: Jean-Christophe NOËL, quoted by Emmanuel Grynszpan in Le Monde

The frantic rate of attacks from the air seems to have contributed to the recent retreat of Ukrainian forces on the Donbas front.

In France, are soldiers outside the Eiffel Tower and the Louvre really worth it?

Sentinel represents a watershed development in French military operations. For the first time since the end of the Cold War, the number of French army soldiers actively deployed in metropolitan France roughly equals that of overseas operations. But the military establishment here is far...

NATO wrestles with internal divisions ahead of Warsaw summit

The alliance is struggling to assemble four battalions to safeguard its eastern flank from a possible Russian attack. In addition, many member states are falling short of their...

Jihad in Syria and in Iraq: a Сhallenge for France

One week after the terrorist attacks in Paris, the police killed two jihadists in Belgium. Officials said that the two men were coming back from Syria and were on the brink of targeting Brussels. The capital of Belgium was already targeted a few months ago: in May 2014,...