Skip to main content
You are here
Home > media > Ifri in the Media > The Raisina Dialogue: India's Answer to World Disruptions
media Ifri in the Media
Sophie BOISSEAU du ROCHER, Françoise NICOLAS, an article in The Diplomat

If India has long been perceived, and rightly so, as a reluctant player in international affairs, but that perception is quickly coming to an end. Indeed, by organizing a major international forum, the Raisina Dialogue, for the third year in a row, Delhi is signaling that it is now seeking to play a much more active role in dealing with the colossal economic, environmental, and political changes and disruptions  affecting the world. 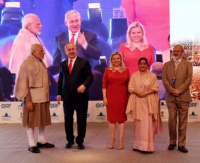 It is no coincidence that the dialogue started shortly after Narendra Modi assumed office as prime minister, since a major tenet of his foreign policy is to enhance India’s diplomatic influence.

What is the Raisina Dialogue all about? Co-organized by the Indian Ministry of External Affairs and the Observer Research Foundation (ORF), the Dialogue is a multi-stakeholder policy forum on international relations. Its primary objective is to concretely help policymakers and analysts in addressing the complexities and understanding the stakes of changing global dynamics. In her inaugural address this year, Sushama Swaraj, India’s minister of external affairs, stressed that the Raisina Dialogue is a platform to explore, deliberate, and launch appropriate initiatives during a time of significant transition. Held from January 16-18, the forum drew more than 500 speakers and delegates from 86 countries to reflect upon 50 pressing topics, with a focus on the rise of city-states, innovative solutions to new threats, digital money, or the chrome age, among others.

To give more credence to the event, this year’s edition was opened by two leaders (Modi himself and Israel’s Prime Minister Benjamin Netanyahu, who was on a six-day official visit in India). Former Afghan President Hamid Karzai joined to speak about the future of the war-torn country, while all navy chiefs of the Quad nations participated in a debate about possible security architectures in the Indo-Pacific.

Of course, there is no dearth of such international dialogues and fora throughout the world, but some features set this event apart and they illustrated India’s growing ambition to play a larger, more substantive role in global affairs, owing to the country’s rise in a region that is increasingly being viewed as critical to future geopolitics.

First, although there was a natural focus on Asian issues (Afghanistan, the Bay of Bengal, Indo-Pacific), the agenda was dense and the topics diverse. The succession of topics spanning technology partnerships, the health agenda, the role of women, the beginning of the Asian Century, and the crisis of democracy was a dense but stimulating agenda. Moreover, the topics underlined the rise of Asian needs, concerns and areas of future leadership.

Second, India wants to position itself as a thought leader, with undeniable success. Through the Dialogue, Delhi is enhancing its public diplomacy to a new, but more concrete level; it allows the Ministry of External Affairs to express its positions and perceptions, to introduce and test run ideas on various topics (e.g., the Indo-Pacific concept, regional connectivity, or crypto-currencies). As such, the Raisina Dialogue is as much an amplifier as it is a testing ground for viable concepts.

Third, this conference was evidence that India is confident in its future and positive on its capacity to handle the numerous challenges to come. As a September 2017 Deloitte report on “Ageing Tigers, Hidden Dragons” observes, India is poised to emerge as an economic superpower, driven in part by its young population; while China and the rest of the Asian Tigers are aging rapidly, “the demographic dividend” is on its side. In the same vein, the Interim Economic Outlook Report released by the OECD (Organization for Economic Cooperation and Development) on September 20, 2017, concludes that India’s GDP growth rate will overtake China’s by next year. The Modi administration is betting on India’s power of values and traditions, combined with its innovation capacity and its business-friendly spirit, to confront unprecedented disruptions.

Fourth, India seeks to assert its position as a hub in the new Indo-Pacific context and this dialogue could pave the way for that ambition. The dialogue’s focus is primarily placed on India’s immediate neighborhood, with the willingness to push regional connectivity through a variety of partnerships, such as the trilateral cooperation scheme with Iran and Afghanistan around the port of Chabahar. The country is now experiencing a diversity of partnerships, which illustrates the inclusiveness of its approach to a connected world.

Lastly, the Raisina Dialogue is conceived as a platform for ideas, allowing India to enhance its importance, specificity, and added-value. In this respect, an interesting point stressed many times during the the three days was India’s ability to act as a benevolent power, i.e. a power open to varying opinions, willing to debate and negotiate, and understanding the scale and stakes of global interdependencies. It was clear that Delhi is positioning itself as an emerging power that underlines peace and tolerance.

More broadly, India is increasingly staking its claim as a global player, and with it also rewriting the traditional north-south economic and political divide.

Acknowledging that the current world order needs to be revamped, India’s Ministry for External Affairs does not want to miss an opportunity to make the country’s voice heard and enhance its stature commensurate with its rise as an economic driver. To that end it is seeking entry into certain global governance platforms such as the United Nations Security Council and the Nuclear Suppliers Group.

The Raisina Dialogue helps confirm global public perception that India’s time is fast approaching. India is messaging to the world very clearly that it desires to be recognized as an emerging and formidable power, a true world power. Now, it remains to be seen, however, whether it will have the means and consistency to match its ambitions. Turning words into action is not always an easy thing.

To see the article on website of The Diplomat

Mitigating Geopolitical Risk – Japan as a Stabilizer in...
END_OF_DOCUMENT_TOKEN_TO_BE_REPLACED
Has the European Union risen up to the challenges of geopolitics? Europe after the Czech...