The COVID-19 crisis has made clear the importance of resilient supply chains and effective economic security. 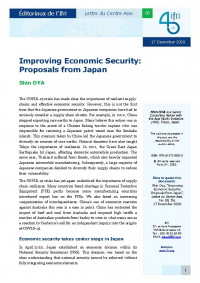 However, this is not the first time that the Japanese government or Japanese companies have had to seriously consider a supply chain shocks. For example, in 2010, China stopped exporting rare earths to Japan. Many believe this action was in response to the arrest of a Chinese fishing trawler captain who was responsible for ramming a Japanese patrol vessel near the Senkaku islands. This measure taken by China led the Japanese government to diversify its sources of rare earths. Natural disasters have also taught Tokyo the importance of resilience. In 2011, the Great East Japan Earthquake hit Japan, affecting domestic automobile production. The same year, Thailand suffered from floods, which also heavily impacted Japanese automobile manufacturing. Subsequently, a large majority of Japanese companies decided to diversify their supply chains to reduce their vulnerability.

The COVID-19 crisis has yet again underlined the importance of supply chain resilience. Many countries faced shortage in Personal Protective Equipment (PPE) partly because some manufacturing countries introduced export ban on the PPEs. We also faced an increasing weaponization of interdependence. China’s use of economic coercion against Australia this year is a case in point. China has restricted the import of beef and coal from Australia and imposed high tariffs a number of Australian products from barley to wine in what many see as a reaction to Canberra’s call for an independent inquiry into the origins of COVID-19.

In April 2020, Japan established an economic division within its National Security Secretariat (NSS). This decision was based on the clear understanding that national security cannot be achieved without fully integrating economic elements.

Japan also strengthened its investment screening mechanism by amending its Foreign Exchange and Foreign Trade Act. This amendment lowered the threshold regarding prior notification for stock purchases by a foreign investor (from 10 percent to 1 percent) in certain key industries. This is to prevent foreign entities or governments from acquiring critical technology and jeopardizing Japanese national security. At the same time, the Japanese government made it clear that they will continue to welcome inward Foreign Direct Investments (FDI), which is important for growth and the upgrading of the Japanese economy.

In direct response to the COVID-19 crisis, the Japanese government allocated approximately US$ 2.2 billion to help its firms build more resilient supply chains by shifting production out of China and bringing production home or to Southeast Asia. This is to reduce over-dependence on a single country for critical goods. Many companies have already applied for this subsidy and it is well utilized.

In Japan, few voices argue for complete decoupling with China. China is a big market and many Japanese people think that keeping good economic relations with Beijing is important. At the same time, awareness of risks that come with an over-reliance on China is deepening. Japan needs to strike the right balance.

International cooperation as a key tool for economic security

International cooperation is imperative for reducing vulnerability and maintaining economic security. This cooperation must not only be among Asian countries, but include a wider network that brings Japan together with Europe (and France for that matter), and the United-States. The author would like to suggest several avenues for cooperation:

Countries sometimes use their economic power to achieve their political goals. Usually, big countries use their economic power against smaller countries. The best way to defend against this is for like-minded countries to stand together. One way to achieve this is through the creation of a “Freedom Alliance Fund”.1 Participants would pay premiums in proportion to the depth of their economic relationship with China. When China threatens a member country economically, that member country would receive compensation from the fund.

The United States under President Trump has been strengthening instruments for export control regulations and investment screening. However, these measures will not be effective without sufficient coordination with other countries in various areas, including a shared definition of critical technology. In addition, US export controls carried out without coordination with allies and partners is unpredictable and hurts the business interests of those countries. My think tank, API, together with the US think tank CNAS and German think tank MERICS, proposed the idea of a “Technology Alliance” that aims at coordinating the technology policies among like-minded countries.2

On September 1, 2020, Japan, India, and Australia announced that they are going to work toward achieving supply chain resilience in the Indo-Pacific region.3 On November 12, Japan and ASEAN also agreed on strengthening their supply chains. These are not exclusive relationships and further outreach is expected.

Finally, when we consider the issue of supply chain vulnerability and economic security, we need to avoid the protectionist argument for reshoring all factories for national security. This is not a realistic policy option, nor does it serve the interest of the country. We need to be selective. We should remember the words of Frederick the Great: “He who defends everything defends nothing”.

[1]. This proposal has been previously detailed in S. Oya, “Coping with China’s Economic Threat”, The Japan Times, 28 July 2020, available at: www.japantimes.co.jp

The EU’s Renewables Expansion Challenge Towards 2030:...
END_OF_DOCUMENT_TOKEN_TO_BE_REPLACED
Neutrality and non-alignment after the Russian Invasion of Ukraine...