Why Should NATO Care About China? A Japanese Perspective Lettre du Centre Asie, No. 89, 12 March 2021

When we look back and think about some of the decisive moments in the West’s attitude towards China, it is rather symbolic that all goes back to Tiananmen Square, 1989. 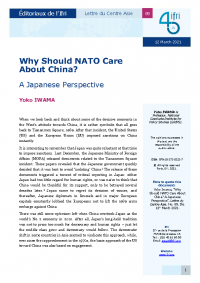 After that incident, the United States (US) and the European Union (EU) imposed sanctions on China instantly.

It is interesting to remember that Japan was quite reluctant at that time to impose sanctions. Last December, the Japanese Ministry of Foreign Affairs (MOFA) released documents related to the Tiananmen Square incident. These papers revealed that the Japanese government quickly decided that it was best to avoid ‘isolating’ China.[1] The release of these documents triggered a torrent of critical reporting in Japan: either Japan had too little regard for human rights, or was naïve to think that China would be thankful for its support, only to be betrayed several decades later.[2] Japan came to regret its decision of course, and thereafter, Japanese diplomats in Brussels and in major European capitals constantly lobbied the Europeans not to lift the 1989 arms embargo against China.

There was still some optimism left when China overtook Japan as the world’s No. 2 economy in 2010. After all, Japan’s long-held tradition was not to press too much for democracy and human rights – just let the middle class grow and democracy would follow. The democratic shift in some countries in Asia seemed to vindicate this approach, while, ever since the rapprochement in the 1970s, the basic approach of the US toward China was also based on engagement.

However, after 2012, Japan–China relations started deteriorating seriously. The following graph clearly shows the turning point. For Japan, after 2012, China became a very tangible physical presence in its territorial waters and airspace, with frequent intrusions.

European nations should learn lessons from the Japanese experience and adopt a more cautious approach to Beijing. In particular, North Atlantic Treaty Organization (NATO) should be focusing more on the multidimensional challenges that China’s expansion is posing.

Trump and the wake-up of NATO on China

A dominant reason why some Japanese wanted Donald Trump to have a second term was his decisively anti-China attitude.[3] In contrast to how his presidency damaged European–American relations, Japan was mildly happy with the Trump administration. Of course, the satisfaction is largely due to a positive Shinzo–Donald relationship, but the security community in Japan, which was never happy with the Obama administration, also appreciated the hawkish attitude of the Trump administration towards China. They also feel grateful to Trump for turning around European attitudes towards China, especially on the issue of the 5G market and risks associated with Huawei. He may not have been a pleasant personality, but he brought concrete results for Japan.

To be fair to the Europeans, at about the same time they started to realize that China is not only a faraway market for their goods, but also a very ambitious political actor. Both the EU and NATO started to view China in a more skeptical manner. In late 2019, the NATO London Declaration mentioned China for the first time in its history. It recognized that “China’s growing influence and international policies present both opportunities and challenges that we need to address together as an Alliance”. A similar view is reflected in the strategic document “NATO 2030”.

NATO must devote much more time, political resources, and action to the security challenges posed by China – based on an assessment of its national capabilities, economic heft, and the stated ideological goals of its leaders. It needs to develop a political strategy for approaching a world in which China will be of growing importance through to 2030. The Alliance should address the China challenge throughout its existing structures and consider establishing a consultative body to discuss all aspects of the allies’ security interests vis-à-vis China. It must expand efforts to assess the implications of China’s technological development, and monitor and defend against any Chinese activities that could affect collective defense, military readiness or resilience in the Supreme Allied Commander Europe’s (SACEUR) Area of Responsibility.

Russia is still the major threat for NATO. This is understandable considering the geostrategic conditions, but China presents a challenge of a different quality, with its industrial might, vast market with 1.3 billion population, its unique one-party system, and its ability to manage cyberspace and control information as well as its people. Russia may be able to use its oil and gas as leverage against some countries, but China has a much wider variety of leverages against other countries – several of which it displayed in its quarrel with Australia recently. The world after the pandemic will rely more on cyber technology, which may well be a paradigm change. We will of course go back to flying, but less than previously, and there will be many more virtual meetings – business, academic and private. The 5G network is just the beginning of our new age, in which every technological step is intertwined with the relationship with Beijing. The Trump period highlighted some unique moments of truth, and the focused attention on Huawei was one of them.

Japan has been trying to persuade Europe about the nature of Chinese power for some time. Recent trends in NATO are welcome, and Tokyo wishes to deepen dialogue and cooperation. But there are still remaining concerns.

Philip Stephens put it very directly when he wrote in the Financial Times on 11 February 2021, “Joe Biden should look to Emmanuel Macron for a European ally: Angela Merkel’s Atlanticism ranks behind Germany’s business interests in China and Russia”. This piece later appeared in Japanese in the Nikkei Shimbun.[4] As Mr Stephens mentions, although Chancellor Merkel showed a very human face during the refugee crisis and has always emphasized respect for human rights and the rule of law, when dealing with Russia and China she has let economic interests take precedence over human rights issues. The timing of the signing of the EU comprehensive agreement on investment (CAI) with China was also not optimal, considering the fact that the incoming American administration had explicitly asked for consultation.

In their opinion piece on multilateralism, Merkel and Macron, together with several colleagues, appealed explicitly for an inclusive and wider multilateralism.[5] Multilateralism rather than alliance has been a key concept of Merkel’s foreign policy, and she has been more concerned about climate than Russian missiles. Traditionally, the United Kingdom (UK) has helped to bridge the gap between the US and continental Europe, but, after Brexit, Britain seems to be preoccupied with sorting out its own place in the world. Therefore, France’s role in maintaining the right balance and focus on the geostrategic issues is crucial. We also need a strong Franco–German engine to pull forward European integration.

The need for Western coordination on China

The world economy will be even more reliant on the Chinese economy after the pandemic. Decoupling in the short term is not an option. We have grown far too interdependent for that. But the Chinese strategic challenge is real, and we will struggle over the coming years to find the right distance from and approach to China.

We must coordinate our approach so that the West as a whole will not become too one-sidedly or asymmetrically dependent on China, so that it becomes a source of vulnerability. A lot of consultation and coordinating work is required, and NATO can play an important role. However, it needs to free itself from too much concentration on 20th century-type military warfare.

We – and not least the USA – have to do our homework, to reform our institutions to fit the 21st century and regain competitiveness. In the end we did not win the Cold War because we had more guns. We won because our societies, with their freedom and diversity, offered products, education systems, management and governance systems, and a way of life that were more attractive.

[1]. Document available on the website of the Ministry of Foreign Affairs (in Japanese), www.mofa.go.jp.

[3]. The publication of an article by “an official of the Government of Japan, Y.A.” caused some stir at the time. See “The Virtues of a Confrontational China Strategy,” Y.A. The National Interest, published on April 10, 2020, www.the-american-interest.com.

Cercles dirigeants russes : infaillible loyauté au système...
END_OF_DOCUMENT_TOKEN_TO_BE_REPLACED
Asia after the War in Ukraine: Re-imagining multilateralism and the risk of...