At a time when the European Union (EU) is discussing its long-term climate strategy and drafting new legislation to foster the decarbonization of its gas sector, a close look at the experience of Denmark, Germany and Italy with renewable gas production can provide valuable lessons. 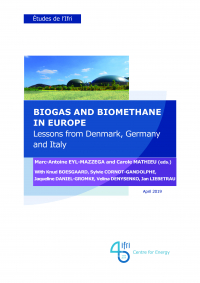 Biogas and Biomethane in Europe: Lessons from Denmark, Germany and Italy Download
2.78 Mo

For more than a decade, these three countries have supported biogas technologies and developed support schemes to facilitate their large-scale deployment. They have more recently focused on developing their biomethane potential.

Committed to reaching carbon neutrality by 2050 and facing the depletion of its gas fields in the North Sea, Denmark has a clear interest in making biogas and biomethane central pillars of its future smart energy system. Likewise, Germany’s Energiewende and its focus on renewable-based electricity generation has led to a robust development of biogas plants with onsite electricity conversion and satellite Combined Heat & Power (CHP) units. This way, Germany became – by far – the largest biogas producing country in the EU, with about 105 000 direct jobs in its bioenergy sector. In Italy, the high availability of agricultural feedstock and the widespread use of gas in transport activities have also been strong arguments in favour of biogas production and the upgrade into biomethane, to facilitate the achievement of the renewables expansion target for the transport sector and reduce the country’s CO2 emissions.

In Denmark, the biogas plants have been primarily used for CHP production in local towns. A base off-take is thus guaranteed but the sole reliance on local needs creates an obstacle to the expansion of biogas. Following the introduction of feed-in premiums in 2014, biomethane injection into the gas grid was given a strong impetus, widening the consumer base: it now accounts for over 10% of volumes transported in the natural gas grid. Concerns over subsidy costs and the switch to tenders as of 2020 is now limiting the sector’s growth potential.

On a similar note, biomethane production has boomed in Germany following the introduction of a biogas upgrading bonus in 2009, but the investment in both biogas and biomethane projects has been substantially reduced in recent years due to the decrease in guaranteed tariff levels and the abolishment of both the substrate bonus for energy crops and of the biogas upgrading bonus in 2014. While two auctions have been run in 2017 and 2018, targeted volumes have not been fully allocated and no substantial cost decrease has been achieved. Another hurdle is the missing market perspectives and policy frameworks for deployment in other sectors so that the biomethane development in the country is expected to stall.

In Italy, the biogas industry took off in 2008, thanks to the introduction of advantageous feed-in tariffs. They were subsequently replaced by less favourable feed-in premiums and the preference was given to by-products and farming waste over energy crops, leading to a stagnation in biogas production and derived heat and electricity since 2012. Priorities have now shifted to biomethane production and, despite the length of the legislative process, the adoption of the March 2018 Biomethane decree is finally giving a strong boost to Italy’s biomethane sector: while only 6 plants were operational at the start of the year, over 900 preliminary gas grid connection projects are being registered corresponding to 2.2 bcm/y. Considering the huge biomethane potential in Italy and its promotion as a transport fuel, the transport sector is expected to be a lever to scale up biomethane production rapidly and enable cost reductions, prior to an expansion of biomethane use to other sectors. The 2018 Biomethane Decree represents the fundamental step for the development of the biomethane chain in the country by promoting and supporting biomethane as a biofuel for transport.

A major policy priority in all countries is to avoid that subsidy costs spiral out of control. While Denmark is now shifting to a strategy similar to the one retained in Germany and turning to an auction-based system with price ceilings, there are concerns for the profitability of investments beyond 2020. In Germany, remuneration levels are too low to justify new projects and the only viable options are to expand existing plants, adjust plants for a more flexible operation and slightly extend small manure-based biogas plants and plants for biowaste digestion. With the upcoming expiry of the Renewables Energy Act (EEG) tariffs, even the continued operation of existing plants is under question. In Italy, a different policy framework has been established, as the support scheme for biomethane is fully financed by transport fuel suppliers as part of their biofuel blending obligations. Beyond the transport sector, guarantees of origin could support the expansion of biomethane, but their level remains too low to cover the investment costs.

The further development of the three markets is conditional on the success of cost reduction strategies alongside a strategic sector coupling approach to policies. In both Germany and Italy, initiatives have been launched to define alternative plant concepts that would be the most suitable with technical and economic constraints, while maximizing the environmental and agricultural benefits. Among cost reduction levers, targeting higher upgrading capacities such as by merging the raw biogas from several plants and reaching economies of scales is one option. The growing number of manufacturers of upgrading technologies is a contributing factor. Besides, the reliance on dedicated professionals leads to a more optimal operation of the plants, improving their overall cost performance. The focus on stable supplies of cheaper substrate is also a priority, with large-scale agricultural or industrial waste offering a promising way forward, the combination of both bringing good results. In addition, the development of new financing instruments could facilitate investments into upgrading and connection facilities, while the sale of the digestate as biofertilizers can create an additional revenue stream. In addition to locating projects at immediate distance from the grid, connection and injection rules (gas quality requirements, management of grid adjustment and compression needs, capacity allocation etc.) should also be defined in the most cost-efficient way, in close consultation with the grid operators.

In any case, the successful development of biogas and biomethane requires strong coordination between all relevant stakeholders and policies from the energy, environment/waste management, transport, agriculture& food sectors, to identify and maximize all energy and non-energy services that these technologies can provide and to harmonize regulation and standards at the EU level. Besides, important efforts need to be deployed in order to address social resistance to new infrastructures, through local awareness campaigns launched at the very start of project implementation and through wider communication initiatives informing the general public on the biogas chain, its economic and environmental benefits as well as transparent controls of odour and leakage.

The Danish, German and Italian experiences confirm that biomethane is a unique renewable fuel. A strict cost comparison with other renewable sources for power production tends to neglect the additional benefits in terms of versatility, storability and dispatchability. These features could be highly valuable in the perspective of smart energy systems, that both Denmark and Germany are pursuing with strong determination. Beyond power generation, biomethane is identified as a suitable option for decarbonizing the transport sector, yet only Italy is remarkably exploring this avenue, and is thus giving credible market perspectives. Conversely, the Danish example highlights how regulation and taxation can put obstacles to the deployment of biomethane as a vehicle fuel. The Italian example showcases the importance of guarantees of origin which should be developed and harmonized at the EU level and a comprehensive strategy involving a support to biomethane production and its utilization in the transport sector. Clarifying the long-term role of biogas and biomethane – for the energy sector and beyond – is a prerequisite to ensure full policy alignment, and thus a cost-efficient development of these fuels. There is also a need to properly take into account the close intertwining of energy, environmental and agricultural policies and strategies, especially when assessing costs of support schemes and better assessing, in each region, the availability and different costs related to the resources used, especially when needed at larger scale, and to take into account the carbon footprint of the supply system. An EU-wide approach is relevant, which the next Gas market package should reflect.

Rapprochement in Times of Crisis: War in Ukraine and the...
END_OF_DOCUMENT_TOKEN_TO_BE_REPLACED
Neutrality and non-alignment after the Russian Invasion of Ukraine...