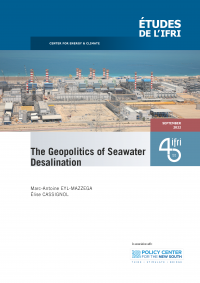 Water desalination is gradually emerging as the leading solution to cope with increasing water stress: i.e., the imbalance between water demand and quantities available. The United Nations estimates that by 2025, two-thirds of the world’s population will be affected by such challenges. The causes of water scarcity are multiple, including climate change, intensive agriculture, and population growth. This requires states to rethink their water policies, which are central to preserving their stability, resilience and sovereignty.

A real “boom” in desalination industries is at work. The majority of Gulf countries now largely depend on desalinated water for their inhabitants’ consumption: in the United Arab Emirates (UAE), 42% of drinking water comes from desalination plants producing more than 7 million cubic meters (m3) per day, in Kuwait it is 90%, in Oman 86%, and in Saudi Arabia 70%. In 2022, there were more than 21,000 seawater desalination plants in operation worldwide, almost twice as many as a decade ago, and the sector’s capacity is growing at between +6% and +12% per year.

By 2030, desalination capacity in Middle Eastern countries is expected to almost double, as part of plans announced in the region to prepare these economies for their transition to “post-oil” and to foster resilience. Saudi Arabia’s desalination capacity is set to increase from 5.6 million cubic meter (m3) per day in 2022 to 8.5 million m3 per day in 2025, and it will have to cover more than 90% of the country’s water consumption. The same holds for the UAE, Kuwait, Bahrain and Israel, where the production of desalinated water will more than double by 2030.

With the rise of available solutions to meet all such needs, these technologies are now in demand on virtually every continent, while the Middle East today represents only 50% of installed capacity worldwide. In Africa, large-scale projects have recently been announced in Algeria and Morocco, countries that until now have had sufficient resources. Other countries such as Ghana, Senegal and Kenya supply many cities with desalinated seawater. This is also the case for Cairo. In the Indo-pacific region, particularly in China and India, the needs for desalinated water are increasing, driven by growing industries and decreasing available water. In 2020 alone, the construction of more than 35 desalination plants was announced in China, as well as six in the Philippines, and six in Taiwan. In the Americas, the west coast of the United States stands out with important projects in California, and Texas is not far behind. In Latin America, new projects are emerging in Peru and Chile, driven mainly by the needs of the mining industry, while in Mexico the demand for desalinated water notably comes from the population. Finally, island areas stand out for their strong needs for desalinated water: Cebu in the Philippines, Cape Verde, the Canary Islands and the Maldives are increasingly using desalination capabilities.

European firms still lead, but Asian or local players are taking off

There are many industrial players of varied size, although some have emerged for more than ten years as undisputed market leaders: in France, they include Engie and Veolia, whose merger with Suez opened up new prospects in the Americas, the Middle East and Europe; but there is also IDE Technologies, the Israeli champion of desalination; Korea’s Doosan Heavy, China’s Abengoa, and Spain’s Acciona.

More recently, companies in emerging countries have distinguished themselves by obtaining large-scale contracts. This is particularly the case of Gulf players like the Emirati company Metito and the Saudi firm Advanced Water Technologies. Egypt also has industrial actors. Overall, the technology of reverse osmosis is largely mastered, while production differentiation concerns capacity, operational costs, electricity consumption and plant life.

Desalinating seawater is an expensive, energy-intensive process that releases significant amounts of greenhouse gases (GHGs) in most countries that have a very intensive CO2 electricity mix. Desalination plants generally use lots of electricity, with variations depending on the technologies employed. Thermal desalination processes, used less and less, consume more than 5 kilowatt-hours (kWh) of energy per cubic meter of desalinated water produced. By contrast, the reverse osmosis desalination process, now the most widespread, can desalinate 1 m3 of water with an average of between 2.5 and 3 kWh, the record being set by a Saudi plant at 2.27 kWh. Desalination plants in the Middle East have largely benefited from an energy mix based on fossil fuels that permit cheap desalination. Electricity consumption for water desalination increased threefold in Saudi Arabia during the period 2005-2020, reaching about 6% of the kingdom’s total electricity consumption, or about 17 terawatt hours (TWh) in 2020. It is equivalent to the annual production of a large nuclear power plant. Doubling desalination capacity will therefore boost electricity demand and associated GHG emissions if the electricity mix remains largely dominated by hydrocarbons. The demand for gas and oil to produce this electricity would also increase. Several Gulf countries are beginning to mobilize renewable energy sources, such as the Al Khafji reverse osmosis plant in Saudi Arabia, which desalinates 60,000 m3 every day, and which is powered by photovoltaic panels. Finally, there are also power stations that operate using wave and geothermal energy.

Another issue with desalination concerns the management of brines: i.e., the remaining water, heavily loaded with the salt particles that have been separated from seawater, is often released into the sea, causing increased salinity levels in coastal waters.

How to improve performance along the entire water chain is the last key issue, not just at the production level. Losses in transmission and distribution networks from factories to final consumers are extremely high, reaching levels of more than 50% in most Gulf countries.

The use of desalination seems inevitable and destined to experience a very strong expansion. It is therefore urgent for these production processes to remove their dependency on fossil fuels because the doubling of installed capacity in the Middle East by 2030 is set to lead to a significant increase in emissions, unless electricity mixes become greener, as in the UAE which has deployed nuclear power in particular.

Two solutions are thus required: on one hand, the setting up of desalination plants powered by low-carbon energy sources (fields of solar panels, concentrated solar power, wind turbines, wave energy, or even nuclear power), possibly with combined cycle power plants for back-up capacity. The aim is therefore to decarbonize electricity mixes to ensure plants provide low-carbon water supplies. On the other hand, the construction of infrastructures of this kind must not replace a policy of energy efficiency, the optimization of desalination plant fleets, the search to cut losses and waste, reducing consumption subsidies as well as the collection and treatment of wastewater. Improving water sector governance and encouraging sustainable water use policies in industry, agriculture and the residential sector, are essential.

Ahead of the 22-24 March 2023 United Nations Water Conference in New York, with the successful COP15 on biodiversity and with the UAE presidency of COP28, water governance, and the development of a sustainable industry across the globe, is becoming central to achieve several Sustainable Development Goals and avoid fueling additional environmental degradations, as this industry is set to boom in the coming decade.

Mitigating Geopolitical Risk – Japan as a Stabilizer in...
END_OF_DOCUMENT_TOKEN_TO_BE_REPLACED
Has the European Union risen up to the challenges of geopolitics? Europe after the Czech...