Israel-Africa Relations: What Can We Learn from the Netanyahu Decade? Etudes de l'Ifri, November 2020

Since he came to power in 2009, Israel’s Prime Minister Benjamin Netanyahu has not made Israeli-African relations a priority in his foreign policy. 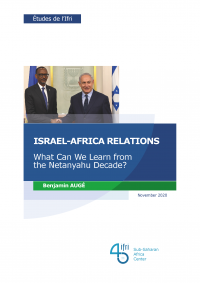 After they broke off diplomatic relations with Israel following the Yom Kippur War in 1973, most African states – besides Malawi, South Africa (apart from between 1975 and 1979), Swaziland and Lesotho – finally resumed relations with the Jewish state during the 1980s and 1990s and more recently for some others. The resumption of diplomatic ties was gradual, as peace efforts were initiated regarding Palestine.

Israel now enjoys diplomatic relations with more than 40 sub-Saharan African states, but only has 12 embassies throughout the entire continent, including in Cairo. The last ones to be opened were in Kigali (Rwanda) in 2019 and Accra (Ghana) in 2011.

The Israeli government today views Africa either as a longstanding sphere of influence (Ethiopia, Eritrea, Cameroon, Ghana, Côte d’Ivoire, Uganda and for the last two decades Rwanda) that needs to be strengthened, or as a new sphere of influence to be developed (the Sahel countries, central Africa, etc.) These relations operate through various conventional channels, including some that have been significantly weakened by Benjamin Netanyahu when he was Israeli prime minister between 1996 and 1999 and since 2009. This is particularly true for the Ministry of Foreign Affairs and its counterpart, Mashav, responsible for development cooperation. However, the security and intelligence sectors (Mossad), controlled by the Prime Minister’s Office, are strong drivers of Israeli foreign policy, hence Benjamin Netanyahu’s dominance over foreign affairs in general, and Africa in particular.

The objective of this paper is to explain how political, economic and security relationships between Africa and Israel have developed in practice during the decade 2009-2020. The aim here is to go beyond a mere account of the history of these relationships. Since 2009, Prime Minister Benjamin Netanyahu – still in power at the time of writing – has frequently talked about his country’s return to the African stage, without necessarily providing his government with the financial resources to achieve this.

The Eurozone’s Vulnerabilities and Risks

European Union-Western Balkans: Lost Illusions?
The United States and France: Partners for the Pacific...
END_OF_DOCUMENT_TOKEN_TO_BE_REPLACED
Ukraine: On the Way to the European Union through the War. Online Briefing by Deputy...