With the Basic Hydrogen Strategy (hereafter, the Strategy) released on December 26, 2017, Japan reiterated its commitment to pioneer the world’s first “Hydrogen Society”. The Strategy primarily aims to achieve the cost parity of hydrogen with competing fuels, such as gasoline in transport and Liquified Natural Gas (LNG) in power generation. 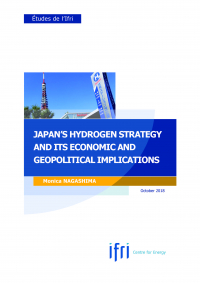 The retail price of hydrogen is currently around 100 yen per normal cubic meter (yen/Nm3)[1] (90 USD ($) cents/Nm3) and the target is to reduce it to 30 yen/Nm3 by 2030 and to 20 yen/Nm3 (17 cents/Nm3) in the long-term. Toward this end, over the past six years, the Japanese government has dedicated approximately $1.5 billion to technology Research and Development (R&D) and subsidies in support of:

Japan’s Strategy rests on the firm belief that hydrogen can be a decisive response to its energy and climate challenges. It could foster deep decarbonisation of the transport, power, industry and residential sectors while strengthening energy security. As such, it is a holistic, multi-sector strategy aimed to establish an integrated hydrogen economy. The Strategy encompasses the entire supply chain from production to downstream market applications. Success will primarily depend on the cost competitiveness and availability of carbon-free hydrogen fuel. Japan’s state-backed approach is ambitious, as it involves domestic and overseas industry and government stakeholders on a number of cross-sectoral pilot projects.

At this stage, the economic and technical challenges and uncertainties have not been lifted. The government awaits the results of the ongoing pilot projects around 2020 before considering the integration of hydrogen into the wider economic and energy plans. While public funding is steadily increasing, it remains limited and reflective of caution against any long-term commitment. Decarbonization of Japan’s energy sector still predominantly rests on nuclear, natural gas, energy efficiency and renewable energy sources (RES). The prospect of hydrogen playing an economy-wide role still meets considerable skepticism both in Japan and abroad. At present, nearly all hydrogen and fuel cell technology is still highly dependent on public financial backing.

Beyond transport, industry, and building sectors, the commercial adoption of hydrogen in power generation will be an indicator of the Strategy’s success. Given that power plants would consume a lot of hydrogen fuel, an operation of several plants would indicate that the hydrogen fuel supply network is reaching price maturity. In addition to hydrogen, ammonia and methylcyclohexane (MCH) are also being studied for direct and co-fired thermal generation.

Japan’s Strategy has global implications, including the potential to trigger a new area of international energy trade and industrial cooperation. Japan and its industry stakeholders are already engaging Australia, Brunei, Norway and Saudi Arabia on hydrogen fuel procurement. Overall, international cooperation will be crucial to scale-up industrial developments, improve technologies and reduce costs. As it forms partnerships on fossil fuel-based production of hydrogen, Japan is also heavily betting on carbon capture and storage (CCS) technology, which is key to reducing emissions but at a very early stage of deployment.

In the long-term, Japan must be mindful of the net cost-benefit and environmental footprint throughout the life-cycle of hydrogen production and use this metric for comparison with alternative energy sources. For instance, without CCS, the Australian coal gasification project is equally polluting as direct power generation using brown coal. The Japanese government remains adamant that it will pursue the hydrogen economy only if large volumes of zero-carbon hydrogen can be secured in the long-term. While CCS remains unproven and carbon pricing is hoped to emerge, countries with excess and cheap renewable electricity may soon be seen as key partners for hydrogen supply to Japan.

In addition to R&D, successful innovation will depend on policy direction and investment certainty. In the case of other previously doubted technologies like solar and wind power, global policy-backed action generated the economies of scale that decreased deployment costs by nearly 80% in roughly a decade. If Japan hopes for any comparable cost precipitation for hydrogen and fuel cells, it needs to be ready to fully commit to scale up hydrogen at home and abroad. If an 80% cost reduction and the full decarbonization of hydrogen fuel are to be achieved in the upcoming decades, the development of the hydrogen supply network will need to be handled with political vigor to unlock sufficient investment and encourage cooperation internationally.

Japan would further benefit from international cooperation in the midstream and downstream technologies. Even in the relatively mature residential CHP and fuel cell electric vehicles (FCV) segments where Japan aspires to become a global leader, nurturing an export market will be critical. The installation and operation of hydrogen and fuel cell technology requires highly advanced infrastructure and skilled technicians, not to mention affordability. Unless Japan achieves a breakthrough and convinces the world to invest in hydrogen, it risks losing a lot of money on Galapagos (isolationist) technology. For example, it took Toyota nine years to sell 500,000 hybrids worldwide in a market that enjoys a large network of filling stations.[2] 800,000 FCVs in twelve years in Japan alone appears ambitious without other countries’ enthusiasm for cost reduction of infrastructure and fuel cells.

Global and coordinated action under a framework that secures fair rewards for developers could encourage technology development and accelerate its commercialization, which if done right, would benefit consumers worldwide and open new doors for businesses. Hence why international coordination of policies and cooperation among industries will also be increasingly necessary.

Mitigating Geopolitical Risk – Japan as a Stabilizer in...
END_OF_DOCUMENT_TOKEN_TO_BE_REPLACED
Has the European Union risen up to the challenges of geopolitics? Europe after the Czech...