What Role Should Southern Europe Play After the Pandemic and the War in Ukraine? Towards a Shared Agenda for EU Reform Notes de l'Ifri, April 2022

Relations between southern European member states have often been marked by a loose cooperation or, worse, by logics of competition. Precisely when regional groupings within the European Union are increasingly shaping the agenda, these dynamics have hindered the capacity of France, Greece, Italy, Portugal, and Spain to pursue shared interests and objectives, while acting as a force for good for the European integration project. Recent events such as the post-pandemic recovery or the war in Ukraine show that, when cooperation occurs, positive results can be achieved. 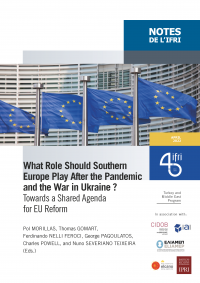