Dependence in Europe's Relations with China: Weighing Perceptions and Reality A report of the European Think-tank Network on China (ETNC), April 2022

The idea that Europe has grown dependent on China is now a common refrain, but just how is this notion understood in capitals across the continent? 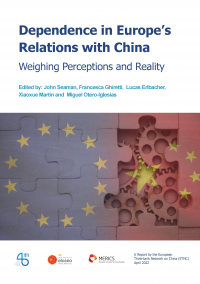 For the eighth report since its inception in 2014, the European Think-tank Network on China (ETNC) brings together analysis on 18 countries plus the European Union  to examine how dependencies on China are presented in European public and policy-level debates, and how the notion shapes policymaking in each case.

Europe today is clearly in the midst of searching for a balance between openness and security—between yielding the benefits of interdependence and reducing the vulnerabilities of dependence. This is not a process that is solely about China, but it is nevertheless one that will fundamentally impact relations with it.

A robust body of work is being done by EU institutions to understand Europe’s dependencies and craft policies to address them at the macro level. While written independently, the report makes a qualitative complement to these ongoing efforts.

A striking observation from this analysis is that, beyond the EU institutions, surprisingly few states have made concerted efforts to assess their dependencies with any degree of depth. In only a quarter of countries observed has there been a significant level of public debate coupled with concerted policy-level action to both understand and address issues around dependence.

The ETNC brings together experts from 20 research institutes across Europe. Ifri is a co-founding, coordinating member of the network.

EU: China, a major driver in the push for greater resilience and autonomy

In her analysis of discussions at the EU level, Ifri's Marie Krpata explains that, against the backdrop of China’s emergence as a global economic powerhouse and its increasing assertiveness on the world stage, the impact of tense Sino-American relations and the Covid-19 crisis have spurred a debate about EU trade-, investment, and supply-chain-related dependencies. This debate has shed light on the vulnerability of the EU’s technological and industrial base and raised awareness of potential risks related to China’s geopolitical aspirations. In this context, the EU has developed strategies, policies, and instruments to reduce dependencies on third powers, including China, while also upholding market liberalism, human rights, and a rules-based world order. With the return of power politics, the EU needs to be clear-eyed about the tradeoffs it faces. If it wishes to embody a distinct position in the face of a growing US–China rivalry, it will have to boost its competitiveness, take measures to combat market and trade asymmetries, and proactively promote its values and interests abroad.

France: China one concern among many in the debate on resilience and strategic autonomy

In their analysis on France, John Seaman and Paul Louédin report that concerns about dependencies on China and the vulnerabilities they create are growing in France. While such dependencies are today seen as limited to a few specific (nevertheless critical) sectors, the potential for China’s dominance in the high-tech industries of the future raises concerns about a more strategic level of dependence in the years to come. Beijing’s observed willingness to leverage its asymmetric advantages through economic coercion, coupled with a broader misalignment of interests on core concepts shaping the international system (from economic governance to political values, the so-called systemic rivalry), are shaping policy views in Paris. And yet, the French discussion on dependence is one element of a broader discussion on France’s and Europe’s place in the world, going well beyond China. While holding to the concepts of openness and free trade, strategic autonomy and sovereignty are organizing principles in French policy discourse. It is now thought that the interdependencies created through open exchanges should be the result of more conscious, clear-eyed political choices rather than solely the consequence of an efficiency-seeking economic rationale.

Discover this and all ETNC reports on the network's website: https://etnc.info/