The European Union (EU)’s Green Deal is a game changer with attention so far focused on forthcoming actions plans, the Climate Law, financial resources, the revision of the 2030 targets and of the emissions trading system (ETS). 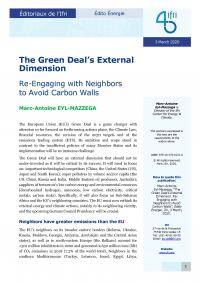 Its ambition and scope stand in contrast to the insufficient policies of many Member States and its implementation will be an immense challenge.

The Green Deal will have an external dimension that should not be under-invested as it will be critical to its success. It will need to focus on: important technological competitors (China, the United States (US), Japan and South Korea); super polluters by volume and/or capita (the US, China, Russia and India, Middle Eastern oil producers, Australia); suppliers of tomorrow's low carbon energy and environmental resources (decarbonized hydrogen, ammonia, low carbon electricity, critical metals, carbon sinks). Specifically, it will also focus on Sub-Saharan Africa and the EU’s neighboring countries. The EU must now rethink its external energy and climate actions, notably in its neighboring vicinity, and the upcoming German Council Presidency will be crucial.

Neighbors have greater emissions than the EU

The EU’s neighbors on its broader eastern borders (Belarus, Ukraine, Russia, Moldova, Georgia, Armenia, Azerbaijan and the Central Asian states), as well as in south-eastern Europe (the Balkans) account for ≈301 million inhabitants in 2020 and generated 2,630 million tons (Mt) of CO2 emissions in 2018 (7.2% of the world total). Neighbors in the southern Mediterranean (Turkey, Lebanon, Israel, Egypt, Libya,Tunisia, Algeria and Morocco) account for a similar population and caused 1,060 Mt of CO2 emissions in 2018 (2.9% of the global total).

Combined, the EU's eastern and southern neighbors therefore have a population that is greater than the EU-27’s by 35% (EU-27 ≈445 million) and their CO2 emissions were 20% higher in 2018 than the EU’27 standing at 3,690 Mt. Moreover, electricity demand in the southern Mediterranean could triple by 2040 and emissions could grow by 36% within a business as usual scenario (according to calculations by the Observatoire Méditerranéen de l’Énergie –OME).

The EU’s trade ties with some of these countries are significant: gas, liquid hydrocarbons and coal imports from Russia totaled EUR 102 billion in 2018. Hydrocarbon imports from Algeria accounted for EUR 11.2 billion in the first half of 2019. Gas exports to the EU are starting from Azerbaijan and Egypt. Ukraine, Belarus, Georgia, Morocco, Turkey, Moldova and Tunisia (by ≈ order of importance) are also key transit countries for hydrocarbons to the EU. All in all, over the next 30 years, these trade relations will progressively diminish. If EU's energy imports, totaling EUR 378 billion in 2018 are reduced by 30% by 2030, at 2018 prices, this would represent EUR 113.7 billion in saving, i.e. 0.006% of EU's 2018 gross domestic product (GDP).

Climate change is no longer an abstract issue: summers are already much warmer and longer in the southern Mediterranean; the water stress is spreading. In the East, droughts, extreme flooding and fires alongside accelerated thawing of the permafrost in the Arctic are worrying trends with direct economic and social implications. Yet most EU’s neighbors have not developed a comprehensive decarbonization strategy. Targets and policies are often insufficient.

At best, they are working on deploying solar and wind power installations to promote electricity-mix diversification, combined with some efforts in the field of energy efficiency. Russia, Kazakhstan, Belarus, Algeria and Uzbekistan have not reaped the benefits of cheaper solar and wind resources.

Overall, energy efficiency is a little or absent priority yet its potential is often large, with much low-hanging fruit still available at low cost.

Decarbonizing the transport or industry sectors is showing little progress. Fossil fuel subsidies are significant in several of these countries, while only a few have started phase out policies (notably Ukraine, Moldova, Georgia, Morocco and Egypt). Air pollution is a critical issue in many cities, notably in Russia, Ukraine, Serbia, and Egypt. China is often involved in energy projects in these regions, not least as part of its Belt and Road Initiative, but with rare green credentials.

South of the Mediterranean, neighbors share structural challenges, such as the need to ramp up electricity supply capacities in emergency to meet higher peak loads and demand from a rising populations and economic growth. Governments must secure quickly available, large and affordable new capacity. In the East, they also need to address infrastructure modernization (especially for hydro, nuclear and transmission and distribution), replacement (for coal), as well as governance and regulation (corruption, lack of competition, insufficient institutional capacity and weak rule of law).

The European Bank for Reconstruction and Development (EBRD) is a powerful tool for transformation (except in Russia and Algeria). The Energy Community Treaty has become a regulatory transformer in Ukraine, and to a lesser extent in Serbia, Georgia and Moldova, where there is local resistance.

EU’s foreign direct investments (FDIs) to these regions showcase the untapped potential: 237 billion euros in the period 2013-2017, or about 9% of yearly FDIs by the EU, compared to 33% to the US alone!

A strategy for re-engagement

EU’s strategy should be both pro-active and dissuasive, in stressing the climate emergency and calling for an end to marginal adjustments and complacency. Not effectively aligning with the Paris Agreement must have consequences and carry costs. Aligning and taking effective actions should bring rewards. Overall, a 60% reduction in greenhouse gas emissions by 2050 should be pursued.

The EU should avoid carbon leakage with the return of carbon-intensive industries in its bordering countries, especially in Ukraine (Association agreement) or Morocco for example. But also imports of carbon-intensive electricity (especially from Ukraine, Moldova and Morocco) or carbon intensive goods (agriculture, steel, cement and fertilizers) need to be avoided while the transformation of industries in the neighborhood must be accompanied. Yet the destabilization of these countries due to falling fossil fuel export or transit revenues, or the closure of access to the EU market because of their insufficient climate policies, is not in EU’s interest.

The priority should be to improve the investment climate to facilitate investments by European companies in partnership with local actors and environmental policies in general, in view of pursuing alignment with the Paris Agreement and addressing urgent threats.

To be acceptable and efficient, the EU's new approach must be technologically neutral (nuclear energy and gas-fired electricity generation notably can be part of the toolbox). A combination of renewables deployment and gas to offset intermittency, or a push for liquefied natural gas (LNG) in the heavy duty road or maritime transport segments, should be favored. The EU should deploy a comprehensive toolkit for integrating renewables, managing peak loads and making cities more sustainable.

Effective action also requires setting a new list of priority countries and sectors. Lead countries would be: Ukraine, Egypt, Lebanon, Tunisia, Jordan, Serbia and Morocco. For their part, Russia, Turkey, Algeria, Kazakhstan and Uzbekistan require a steady engagement given their importance, although prospects for rapid changes are limited. Other countries have lower carbon footprints or represent excessively big challenges for change: the focus should be narrowed to identify specific opportunities and ongoing efforts by the EBRD.

The new strategy should of course be enshrined with partner governments but should also increasingly seek to engage local actors, notably cities, and seek to support the private sector.

Priorities for action should focus on sectors where: i) low hanging fruit can be harvested; ii) there is a risk of carbon leakage or carbon imports to the EU; and iii) emissions and environmental degradation are most significant. A few examples, by country:

The EU toolbox and instruments should include:

Credibility will be key: this requires full transparency of EU's objectives and instruments while Members States must align and coordinate their bilateral policies with the EU strategy.

The Green Deal cannot be and should not be an instrument for autarky. It should be an opportunity to re-engage in particular with key EU neighbors, to kick-start their own energy transition and avoid that destabilizing carbon walls are erected. These would leave us all losers: the fight against climate change would be weakened; there would be massive, missed investment opportunities; the economic and environmental stability of our neighbors would be at risk with potential implications for the EU (lower growth, migrations, crime, terrorism, weak or failed states). Lastly and decisively, our transition effort could be more challenging: integrating these countries in our low carbon systems can provide economic and technical advantages. For these reasons, the geographical scope of EU low carbon energy systems being designed should include key neighbors. It is upon them to decide rapidly if they want to be part of that process. Ultimately, if achieving carbon neutrality in the EU proves too costly, then joint investments in these countries where emissions can be cheaper to curb, with fairly-shared accounting of reductions, could offer a solution to bridge the emissions gap.

The new strategy should include a massive effort towards energy efficiency and sustainable cities, and should prepare for possible imports of low carbon electricity or decarbonized hydrogen/ammonia from Africa for example, or cooperating with Russia or Ukraine on carbon capture for example. Unprecedented efforts towards an improved business environment must be devoted in order to secure mutually beneficial economic opportunities in the long run, and widen the EU’s area of prosperity, stability and environmental preservation.