A colorful elevated view of houses in a residential area in Maputo, the capital of Mozambique with tall buildings in the background
Credits: Wandel Guides/Shutterstock.com
Eleonora DOBLES PERRIARD

Land Tenure Tensions in Maputo. A Study of the Neighborhood of Polana Caniço L'Afrique en questions, No. 38, 11 September 2017

Maputo, the capital of Mozambique, is driven by fascinating urban dynamics. The country’s institutional setting is influenced by the legacies of the different political regimes of the last 50 years, which have left visible traces on the urban fabric. 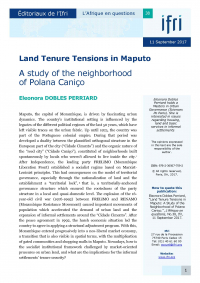 Up until 1975, the country was part of the Portuguese colonial empire. During that period was developed a duality between the established orthogonal structure in the European part of the city (“Cidade Cimento”) and the organic nature of the “reed city” (“Cidade Caniço”), constituted of neighborhoods built spontaneously by locals who weren’t allowed to live inside the city.[i] After Independence, the leading party FRELIMO (Mozambique Liberation Front) established a socialist regime based on Marxist-Leninist principles. This had consequences on the model of territorial governance, especially through the nationalization of land and the establishment of a “territorial lock”,[ii] that is, a territorially-anchored governance structure which ensured the rootedness of the party structure in a local and quasi-domestic level. The explosion of the 16-year-old civil war (1976-1992) between FRELIMO and RENAMO (Mozambique Resistance Movement) caused important movements of population which accelerated the demand of urban land and the expansion of informal settlements around the “Cidade Cimento”. After the peace agreement in 1992, the harsh economic situation led the country to agree in applying a structural adjustment program. With this, Mozambique entered progressively into a neo-liberal market economy, a transition that is also visible in spatial terms, with the multiplication of gated communities and shopping malls in Maputo. Nowadays, how is the socialist institutional framework challenged by market-oriented pressures on urban land, and what are the implications for the informal settlements’ tenure security?

The Mozambican framework for land regulation

The changing socio-political context of the country has had implications on the land’s symbolic value and its regulation mechanisms. In 1995, after the devastations caused by the civil war, the Council of Ministers approved the new National Land Policy,[iii] which was justified by the acknowledgement of “a new phase of social and economic development characterized by a market economy”, as agreed with the signing of the readjustment plans. It aimed at promoting private investment by allowing the transfer of the rights of occupation and usage (DUAT), which implied that the land as such could not be formally sold, but the right to occupy it could nevertheless be transferred through a monetary exchange. Mozambique’s Land Law (Lei de Terras)[iv], adopted in 1997, is considered one of the most progressive and comprehensive land laws in the world, and is often hallmarked as a success-story, due mainly to:

The “Lei de Ordenamento Territorial”,[v] published ten years after the ‘Lei de Terras’ reinforced this progressive trend. Not only did it aim at guaranteeing access to urbanized parcels to all citizens, but also it explicitly seeks to avoid the acquisition of parcels for speculative ends. Nevertheless, operational flaws are often highlighted, and more radical criticisms are addressed to the politics behind it, as some denounce that “the law may be progressive but government politics are not, as an increasingly hegemonic elite controls Mozambique’s political system and resources”.[vi]

The normalization of an informal land market

As mentioned above, in the Mozambican framework, land is theoretically an asset that cannot be commercialized in Mozambique, since it cannot be owned by anyone but the State. The DUAT itself cannot be sold, but it can be transmitted through the transaction of  “benfeitorias” (for instance, selling the house or trees that are anchored to that plot), setting the basis for a formal market of the right to occupy a plot. Therefore, there is an existing and functioning land market, which is so widespread and normalized that it is not unusual to see “land for sale” advertised. In parallel to the DUAT, another market has developed at the margins of the formal one, resting on informal mechanisms of land allocation/occupation,[vii] which respond to the pressure on land caused by the systemic impossibility of the State to provide enough parcels and the pressure on land due to unaffordable prices for most of the population.

In reality, besides the very pertinent theoretical discussion on the appropriateness of the formal/informal dichotomy in the context of African cities, the practices we refer to as formal and informal are often less clearly distinct as they intertwine in several ways, in particular through the proximity between the state officials and the private investors. The legislation only allows foreign investors to develop their projects if they have a partnership with a national citizen, and many of the highly placed state officials have therefore economic interests at stake in the real estate sector. In practice, access to a DUAT is increasingly dependent of the political and economic power of the solicitant.[viii] Indeed, in Maputo, 800,000 households out of a population of 1.27 million people in the city do not possess a DUAT for their land.[ix]

So, why does the acquisition of the DUAT is useful for the inhabitants of informal settlements, taking into consideration that in the end it only recognizes the right to occupation and never to ownership? If a DUAT cannot avoid resettlement, it is at least a tool of negotiation that serves as warranty to obtain a fair compensation. It also allows to depend less on the “parallel system of informal titling led by the neighborhood authorities — a type of twilight institution with an ambiguous relationship to the municipal state”.[x] Indeed, these local structures have a central role in documenting residence and land transactions, as they are entitled to emit a document called “testemunha”, in which they confirm the person’s residence. Often, the transactions of land are legitimized by the emission of a “testemunha” stating that the person occupying the plot has changed. Despite the appearances and ritualization of legality, this document has no formal legal basis, nor do these transactions, since the city council is the only formally authorized entity to allocate land. They are nevertheless endorsed by the Secretários de Bairro, which are usually allocated by the government. Therefore, “the most local level of the State is involved in facilitating theoretically illegal transfers of land and encouraging residents to believe they are secure”.[xi]

The “Cidade Cimento” is surrounded by an expanding metropolitan region mixed by heterogeneous neighborhoods, mostly characterized by low-income informal neighborhoods, which are in fact the most widespread typology of neighborhood in the city:  80% of the Mozambican population lives in “informal settlements”[xii] and 60% of Maputo’s population lives in sub-standard housing units.[xiii] Maputo’s municipality has increasingly been making the attempt to develop plans determining spaces for specific functions or audiences. The dynamics at stake in Polana Caniço reveal undergoing processes happening throughout the city, linked to the implantation of neoliberal economic mechanisms entailing speculation and the mercantilization of land.

Polana Caniço is a peri-central neighborhood, situated close to the Indian Ocean. It knew an increased growth during the civil war, as an important number of internally displaced persons took refuge in Maputo, accelerating an unplanned process of urbanization. Throughout the last 20 years, the neighborhood has been experiencing deep transformations.

These engender palpable tensions and physical borders between two very different types of urban fabric, the “caniço” (low-standard housing) on one hand, and high-standard housing, commercial and service buildings on the other. New developments have risen in the area since the 2000s, and have settled into securitized enclaves, with surveillance cameras and guards, which despite the very close cohabitation with the “caniço” residents, have little contact with them.[xiv] The urban fabric established by the new developments is advancing into the neighborhood of Polana Caniço, slowly taking over the space formerly occupied by the low-income community. The part of Polana Caniço that has undergone the most impressive transformation is known today as Sommershield II, being associated in the imaginary to the neighborhood of the embassies and international organizations, rather than to its actual administrative unit. It is nevertheless hard to imagine that ten years ago the area was essentially “caniço” when you observe today those two realities, colliding but disconnected.

In 2014 was presented the Partial Urbanization Plan (Plano Parcial de Urbanização). The project of requalification, led by a Spanish consulting firm, proposes three different scenarios of requalification of the neighborhood, setting as a basis the premise of avoiding as much as possible massive resettlement followed by population replacement, and understanding densification as “the only possibility to enhance the quality of the urban space, while keeping the same or a higher shelter capacity”.[xv] The inhabitant’s reactions fluctuate between viewing it as an opportunity, remaining skeptical or simply not feeling included in the vision of Maputo that is being advanced, in an effort to reinvent the narrative of who belongs to and represents the city.

As explained above, Polana Caniço is a space in which the tensions between the diverse pressures at stake on urban land in Maputo are very clearly materialized. It is going through a substantial transformation both in its forms and usages, influenced by new demands on the valuable and well-located urban land which has an important monetary value for investors in the contexts of the opening to a neoliberal market-based economy. There seems to be a disjointedness between an institutional framework that is still strongly moved by the narratives of socialism and actual trends that are oriented and pushed by market forces and that are re-conceptualizing the urban fabric in a way that is not always inclusive. These changes also entail a transformation in who uses and is perceived as legitimate to occupy valuable urban land. It is essential to address the vulnerability that inhabitants of informal settlements face when confronted to market-oriented forces exerted on a territory in contestation. Maputo’s land policy makers are today faced with the challenge of achieving a sustainable balance between stimulating economic growth and meeting basic social needs, for which should be prioritized of the prerogative of spatial justice.