The ‘Conservative Turn’ in Indonesian Islam: Implications for the 2019 Presidential Elections Asie.Visions, No. 106, March 2019

Despite Indonesia’s reputation for a traditionally moderate brand of Islam, religious conservativism is gaining considerable political traction in the lead up to this April’s presidential election. 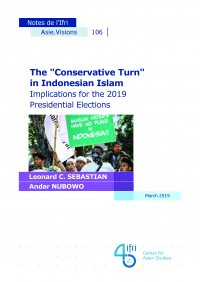 During the campaign for the 2017 Jakarta Gubernatorial elections, thousands of Muslims gathered in massive demonstrations against Ahok, the initial frontrunner and a candidate from a minority ethnicity and religion, accusing him of blasphemy. Many observers have looked at the unprecedented size of the anti-Ahok rallies and their electoral context as a watershed in the evolution of Indonesian Islam.

This article analyses the seismic shift in Indonesian Islam that has occurred, with moderate Islam in steep decline while conservative Islam is on the rise. It argues that radical Islam and violent extremism in Indonesia are only the tip of the iceberg—a resurgence of conservative Islamic ideology and large-scale Islamisation of Indonesian society has occurred over the nearly two-decade old Reform Era.

This conservative turn is powered by growing numbers of highly effective and nimble conservative groups and leaders that leverage on the star power of charismatic leaders and digital marketing to disseminate a conservative ideology to the millennial generation.

Ahok’s downfall was in many ways a product of this conservative turn. Religion and identity politics were certainly not the only factors involved—there were genuine socioeconomic grievances with Ahok’s policies—but the evidence suggests that religion played a decisive role in voting patterns. A new generation of Muslims who do not see a place for minorities in Indonesia has the potential to overturn centuries of harmonious and peaceful co-existence with dire consequences for democracy.

There has been a significant erosion of the ability of the two moderate Islamic organisations (Muhammadiyah and Nadhlatul Ulama - NU) to act as a bulwark against conservative Islam and exercise spiritual thought leadership in support of moderate Islam. As the two major forces of Islamic moderation in Indonesia, Muhammadiyah and NU should maintain their neutrality as Islamic civil societies, and should not become pseudo political parties. However, both of them also should not totally distance themselves from politics, as they could be applying an allocative politics toward all political forces, maintaining the same distance to all political forces. By holding fast to their basic foundation (khittah) consistently, it will become necessary for the two mass organisations to guard Indonesia’s future trajectory against the temptation of conservative groups to turn the 2019 presidential election (Pilpres) into an opportunity to push their religious and political agenda of shariatisation of the country.

The fact that Jokowi and Prabowo do not comprehend the dangers of how conservative discourse and agendas may lead them to be trapped in a political strategy that would lead Indonesia on a path of deepening Islamization of politics is a worrying trend.

The Political Economy of the Metaverse
END_OF_DOCUMENT_TOKEN_TO_BE_REPLACED
Critical minerals: How to secure stable and resilient supply chains? Views from Europe...