Despite some constraints on their Indo-Pacific strategies, South Korea and France could consider bilateral dialogues for partnership in the Indo-Pacific, leading to a high level of confidence and strategic convergence in security. 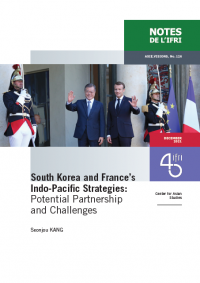 South Korea is, by location, an Indo-Pacific country but has kept its distance from the United States’ “Free and Open Indo-Pacific” (FOIP). This is an outcome of the interplay between South Korea’s strategic environment and domestic politics. Firstly, South Korea has prioritized North Korea in its foreign policy and viewed the FOIP as unfavorable to inter-Korean relations. Secondly, South Korea has pursued autonomy amid US-China competition, but it cannot afford to antagonize its top trading partner, China, by adopting the FOIP. Thirdly, the FOIP could draw South Korea into the US military operation outside of the Korean Peninsula. Lastly, the US FOIP partially overlaps with President Moon Jae-in's “New Southern Policy” (NSP).

During the Trump administration, South Korea accommodated the FOIP selectively where there were overlaps with the NSP, and secured autonomy within the FOIP. A noticeable shift in South Korea’s stance came during the ROK-US summit held in May 2021. President Moon endorses the core elements of President Joe Biden’s Indo-Pacific strategy aimed at China, though not directly referencing China. South Korea’s stance on the FOIP is evolving from reluctance towards alignment. President Moon has become more receptive to the FOIP because South Korea faces the risk of isolation in the Indo-Pacific theater and anti-China sentiment is rising among the Korean population. And he has been hoping to use endorsement of the FOIP as a way of securing US cooperation on North Korea, gaining greater access to US vaccines, and turning around his approval ratings before the presidential election next year (2022).

However, it is unlikely that, in the foreseeable future, South Korea will join the US-led Freedom of Navigation Operations in the South China Sea. The result of the upcoming presidential election will determine South Korea’s Indo-Pacific strategy over the next five years. If a new president is elected from the conservative party, s/he is likely to revisit the stance on the FOIP. Nevertheless, due to the interplay of the factors that generated the current stance, South Korea’s options would lie on the continuum of aligning with the US or China at each end and ambiguity in the middle. South Korea might shift from strategic ambiguity towards strategic autonomy, announcing its Indo-Pacific strategy officially.

France was the first European country to officially announce its Indo-Pacific strategy, which is geared towards defense and military since it was motivated by security concerns about the rise of China. Its strategy aims at preventing inappropriate behavior by China in the Indo-Pacific. However, the effectiveness of this strategy is dubious considering the limits of France’s military capability in the Indo-Pacific.

South Korea and France could consider partnering in the Indo-Pacific. An important commonality between their Indo-Pacific strategies would lie in strategic autonomy. By promoting a principles-based approach, South Korea and France could lower tensions and maintain a balance of power as well as achieving their respective national interests without worrying strategic consequences. They would face common challenges, too. Their pursuit of strategic autonomy could become a source of disagreement with the US. Also, China would dismiss the two countries’ strategic autonomy, believing that it would reinforce the US position and strengthen collective deterrence against China. Second, South Korea and France have limited capabilities, which makes their Indo-Pacific strategies less effective and less credible. Lastly, their cooperation in maritime and non-traditional security might not align with reducing tensions between the US and China and thereby securing strategic autonomy for themselves.

Despite the above constraints on their Indo-Pacific strategies, South Korea and France could consider bilateral dialogues for partnership in the Indo-Pacific, leading to a high level of confidence and strategic convergence in security. Second, they could start maritime cooperation to confirm interoperability and display commitment to strategic autonomy. Lastly, they could consider jointly launching new institution-building in the Indo-Pacific aimed at reducing tensions between the great powers through regularized dialogue.

Modernization of the Bundeswehr: Back to basics?

More Europe in the face of realpolitik’s return? French...

A Guide to Solve EU’s Hydrogen Dilemmas
END_OF_DOCUMENT_TOKEN_TO_BE_REPLACED
The EU’s Power System by 2030: Navigating the Crisis and Keeping the Decarbonization Cap...