Mormonism has been making headlines ever since Mitt Romney declared his candidacy to the White House. This 19th century American-born religion puts forth a set of values that is both original and strong. A better understanding of these values is necessary as Mormonism develops both inside and outside the United States. 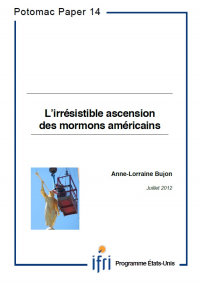 Born of an era of religious effervescence in the first half of the nineteenth century in America, the Church of Jesus Christ of Latter-­day Saints was shaped by a very specific history and culture.

Its members, subject to persecution and a difficult journey to the far west in the first decades, started a process of “normalization” at the end of the nineteenth century, which seems to have entered a new chapter with the presidential candidacy of Mitt Romney.

Mormonism remains difficult to appreciate, however. For one thing, it cannot be reduced to a single set of values or representations. Some of its theological tenets are part of a typically American set of values: the entrepreneurial spirit, the thirst for challenge and effort. On the other hand Mormonism also maintains a powerful and respected hierarchy, a fondness for secrecy in both its liturgy and finances, as well as a condemnation of dissent, all of which contradict the equally American habits of individual freedom and openness.

Additionally, the social values they advance – importance of the family, well-defined roles for women, rejection of homosexuality, and, until 1978, of blacks into the church – make them allies of conservatives. But their long‐standing involvement in social and humanitarian work would place them in the progressive camp. Moreover, their thirst for modernity, science and globalization puts them at odds with creationists and other Christian fundamentalists, for whom Mormon theology remains unacceptable anyway.

If the idiosyncrasy of the 6 million American mormons seems less of a problem today, their church does face yet another important challenge: manage their success throughout the rest of the world, which today has 8 million members.

Naval Combat Redux: A Renewed Challenge for Western Navies
END_OF_DOCUMENT_TOKEN_TO_BE_REPLACED
Is the UN Security Council still relevant? France and Japan's views on the future of...