In recent years, France and the European Union (EU) have published their respective Indo-Pacific strategies and a Ministerial Forum was held in Paris on February 22, 2022, bringing together over 60 foreign affairs ministers from European and Pacific Island countries. 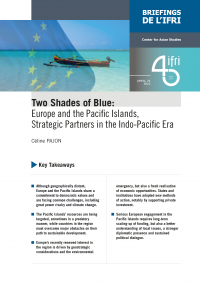 France and the EU are re-engaging in this strategic region, which is an economic and political center of gravity whose stability is threatened by transnational risks (climate change, epidemics, pressure on natural resources) and by inter-state tensions exacerbated by US-China rivalry.

However, the area spanning the 22 member countries and territories of the Pacific Community (SPC) has received less attention and can even be described as a blind spot in these Indo-Pacific discussions. Yet, although they have a population of only 13 million, these Pacific Island states and territories have a combined Exclusive Economic Zone (EEZ) of almost 40 million square kilometers (km2) and are strategically located close to East Asia. These territories and their natural resources have attracted and still attract keen interest and sometimes very violent competition between powers. Today, the Pacific Islands are on the front line of the global existential challenges of climate change, biodiversity protection and sustainable development, but also geostrategic rivalries.

Due to the geographical distance and Europe's still limited knowledge of this region, political, economic and media interest is often lacking. For this reason, Ifri and the Pacific Community (SPC) have decided to organize a research program on the strategic importance of the Pacific Islands.

This Briefing is based on discussions that took place at the program’s opening conference on March 10, 2022; contributions from panelists will therefore be highlighted.

This report provides an overview of current regional issues in the Pacific Islands and argues for greater European engagement in the region. This rapprochement is justified firstly because European and Pacific Island countries share similar values and face similar challenges, and secondly because new European interest and facilities make Europe a partner of choice to support sustainable development in the Pacific Islands. Since this engagement will come with various challenges, recommendations for European decision-makers are outlined in the conclusions.

The topics discussed at this opening conference will be further addressed in three upcoming webinars and publications, which will focus on oceans in June, global warming in September and food security in November 2022.

This Briefing was supported by the Pacific Community (SPC):

Mitigating Geopolitical Risk – Japan as a Stabilizer in...
END_OF_DOCUMENT_TOKEN_TO_BE_REPLACED
Has the European Union risen up to the challenges of geopolitics? Europe after the Czech...