More renewables in the European Union? Yes, we can Edito Energie, April 2018

The European Union is about to adopt new renewable energy targets for 2030. While going beyond the initially-planned 27% is absolutely feasible, the EU strategy can only be credible if it is based on a good mix between performance and effort obligations, and also includes possible review clauses. 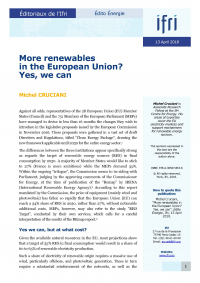 Against all odds, representatives of the 28 European Union (EU) Member States (Council) and the 751 Members of the European Parliament (MEPs) have managed to devise in less than 16 months the changes they wish to introduce in the legislative proposals issued by the European Commission in November 2016. These proposals were gathered in a vast set of draft Directives and Regulations, titled “Clean Energy Package”, drawing the new framework applicable until 2030 for the entire energy sector.[1]

The differences between the three institutions appear specifically strong as regards the target of renewable energy sources (RES) in final consumption by 2030. A majority of Member States would like to stick to 27% (France is more ambitious) while the MEPs demand 35%. Within the ongoing “trilogue”, the Commission seems to be siding with Parliament, judging by the approving comments of the Commissioner for Energy, at the time of publication of the “Remap” by IRENA (International Renewable Energy Agency).[2] According to this report mandated by the Commission, the price of equipment (mainly wind and photovoltaic) has fallen so rapidly that the European Union (EU) can reach a 34% share of RES in 2030, rather than 27%, without noticeable additional costs. MEPs, however, may also refer to the study “RED Target”, conducted by their own services, which calls for a careful interpretation of the results of the REmap report.[3]

Yes we can, but at what cost?

Given the available natural resources in the EU, most projections show that a target of 35% RES in final consumption would result in a share of 60 to 65% of renewable electricity production.

Such a share of electricity of renewable origin requires a massive use of wind, particularly offshore, and photovoltaic generation. These in turn require a substantial reinforcement of the networks, as well as the development of flexibility tools, in order to mitigate the variability of the wind and the sun. However, many studies omit the costs associated to networks and to flexibility. The REmap report, for example, clearly states that it does not take into account these costs.

It should be noted here that most of the time surveys compare the cost of two new installations, for example a gas plant with a wind farm. The latter has now become cheaper, but for countries whose consumption is stable and which have a recent conventional generation fleet meeting the highest environmental standards, it would be more relevant to compare the cost of a megawatt hour (MWh) from a new wind farm with the cost stemming from an existing nuclear, gas or coal power plant. Ironically enough, the recent reform of the Emissions Trading System (ETS)[4] is unlikely to be enough to significantly increase the price of CO2, so the additional production of renewable electricity will hardly threaten the coal plants, yet the most polluting. Germany’s trajectory illustrates this paradox, with electricity generation from fossil sources having decreased by less than 4% between 2000 and 2017, while installed capacity from renewable sources has increased by 600% over the period.[5]

Beyond the economic aspects, the stakes are high. Geopolitical considerations and the EU’s external energy bill, which is close to one billion euros a day, clearly advocate for strengthening the share of RES[6], and so does the prospect of enhancing the initial commitments made under the Paris Agreement.

The key to success probably lies in the pace of change.

Yes we can, but at what pace?

On a technical level, it is certainly necessary to make further progress in the fields of electricity storage, the use of digital tools to better adjust demand to supply, and the valuation of the offshore wind potential,[7] but there is no major obstacle to this progress. Obviously, societal, land-use, environmental and also military constraints may impede the development of new production sites, although initiatives are taken to alleviate the administrative burden. The most serious threat would actually be a turnaround of public opinion; it could occur if support schemes were not put in place to mitigate the shocks caused by a surge from 20% to 35% RES in ten years.

The first of the support schemes to be planned pertains to the cohesion of the EU. The assessments found in the REmap report or its equivalents remain based on an average cost, established in present value (LCOE)[8]. In the case of wind and solar, the average LCOE conceals large disparities, since the cost of capital exerts a determining influence in the calculation; yet it varies from simple to double between certain countries of Western Europe and various countries of Eastern or Southern Europe.[9] The European Investment Bank (EIB) is already offering a large set of financial products to promoters of renewable energy projects, be they large or small projects, and these also have access to the European Fund for Strategic Investment running until 2020. However, the disadvantage remains and additional corrective measures should be envisaged, such as the introduction of a Community Guarantee Fund for Clean Energy Investments, topped up inter alia by ETS revenues, and a stronger involvement of the EIB in countries facing the strongest financing hurdles.

A second support scheme relates social cohesion. Impact assessments anticipate that a 30% RES target will result in the closure of more than 150 gigawatts (GW) of conventional power capacity, or 27% of the fleet in service in 2015.[10] Can we believe that the entire workforce thus laid off will be easily converted into new jobs related to the energy transition? The Commission is well aware of the challenge.[11]

The Commission also admits that in the same period, the cost of the “energy system” will increase. In a recent “non-paper”, the increase of the full cost is appraised at 84 billion euros per year if we retain the 2030 targets that the European Parliament calls for (a share of 35% RES and a gain of 35% in energy efficiency).[12] But any increase, however modest it may be, will exacerbate tensions that are masked by average data. As an example, several countries are already charging most of the extra costs on small consumers, to avoid any burden weakening the position of the large industry in the global competition. The share that manufacturers do not pay increases the cost for other consumers and, at European level, these practices distort competition.[13]

As the cost of the energy system increases, policies to alleviate fuel poverty will weigh more on the State budget or on solidarity mechanisms between consumers, and consequently reduce the purchasing power of citizens who do not benefit from these policies. If the binding nature of the target regarding energy efficiency is endorsed as wished by the MEPs, against the current opinion of the States, these “ordinary citizens” may also be subject to additional expenditure to improve the energy performance of their housing and their vehicle. They are promised lighter invoices later on, but they might find that it takes a long time before achieving a return on investment.[14] It is thus crucial to take fully into account the risk entailed by this constraint, in order to avoid a rejection of the energy transition process as a whole.

Finally, an ambition that is too high can turn into a boon for foreign resources and equipment suppliers. The REmap report expressly concedes that a target of 34% for RES will lead the EU to increase wood imports for its biomass plants and biofuels for its vehicles. The reliance on imports will also grow as regards critical raw materials, of which technologies related to RES and batteries are greedy.[15]

Yes we can, but let’s be cautious!

The Clean Energy Package includes an oddity: it sets a common target for RES, but without a relevant common tool to drive progress. In this context, the Parliament wants 28 binding national targets ending in 35% for the EU as a whole, with precise trajectories for implementation by every State under a rigorous control by the Commission. MEPs are driven by the desire to provide high visibility to industrial actors, in the hope of strengthening the sector and achieving further price reductions. The intention is praiseworthy, but a too high target would make this visibility illusory, exposing professionals to a risk of sudden reversal. Because of numerous uncertainties, the least of which is not the versatility of the electorate, it seems preferable to leave some room for manoeuvre. A good mix between binding objectives and simple obligations of means, a flexibility of execution left to the States and a role of facilitator devolved to the Commission offer the best guarantees of success, leaving of course the possibility of revising the requirements upwards, thanks to review clauses.

The EU’s environmental credibility is therefore not assessed solely in relation to the target figure for RES by 2030. On the one hand, the framework for the national trajectories will matter as much, if not more, than an ambitious goal at EU level. On the other hand, the arbitrage on renewables is inseparable from the efforts made on other areas covered by the Clean Energy Package, notably energy efficiency, and by greenhouse gas (GHG) emissions reduction policies, including the ETS reform. Let’s not forget that the purpose of revising all legislation pieces at once was precisely to avoid counterproductive interactions. What matters is that the EU moves forward coherently and effectively on all fronts, to finally be able to revise upward its GHG emissions reduction target for 2030.

[1]. Council and Parliament worked separately until February 2018 under the gaze of the Commission; their delegates have now begun to meet in the hope of achieving concrete wording acceptable to all three parties. These negotiations are expected to continue in the coming months, for final ratification, if agreed, before the next European elections in spring 2019. See M. Cruciani, “The Landscape of Renewable Energies in Europe in 2030”, Notes de l’Ifri, June 2017, available at : www.ifri.org, and M. Cruciani, “Le paquet ‘Énergie propre’ à mi-parcours”, Édito Énergie, Ifri, December 2017, available at: www.ifri.org.

[4]. The ETS system allocates a cost to each tonne of CO2 emitted by the 12,000 largest European installations.

[7]. An upcoming Ifri study will specifically address the development of wind generation in the North Sea.

[9]. DIACORE Project, under the coordination of Fraunhofer ISI, “Policy Dialogue on the Assessment and Convergence of RES Policy in EU Member States”, July 2016, p. 49.

[11]. In this respect, the launch of the Platform for Coal Regions in Transition, by Commissioner Miguel Arias Cañete, on 11 December 2017 is a most welcome initiative.

[13]. Thus, thanks to the exemptions granted to the German industry, a large plant located in the suburb of Aachen pays electricity 41 €/MWh against 71 €/MWh for his counterpart based in the vicinity of the Belgian Liege for equal consumption. See Deloitte, “Benchmarking Study of Electricity Prices between Belgium and Neighbouring Countries”, Press Conference, 7 March 2018, slide 5.

[14]. In existing buildings, the return time on investments for energy efficiency usually exceeds 10 years, sometimes 20 years, depending on the price of energy.