Defining the Middle Class in the Global South. A Quantitative Perspective from South Africa L'Afrique en questions, No. 33, 13 June 2017

What makes you middle class? Is it your income, occupation, or education? Your family background or maybe the house and neighbourhood you live in? It is probably all of these things. 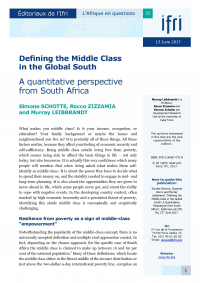 All these factors matter, because they affect your feeling of economic security and self-sufficiency. Being middle class entails being free from poverty, which means being able to afford the basic things in life – not only today, but also tomorrow. It is actually this very confidence which many people will mention first when being asked what makes them self-identify as middle class.[i] It is about the power they have to decide what to spend their money on, and the stability needed to engage in mid- and long-term planning. It is also about the opportunities they are given to move ahead in life, which some people never get, and about the ability to cope with negative events. In the developing country context, often marked by high economic insecurity and a persistent threat of poverty, identifying this stable middle class is conceptually and empirically challenging.

Resilience from poverty as a sign of middle-class “empowerment”

Notwithstanding the popularity of the middle-class concept, there is no universally accepted definition and multiple rival approaches coexist. In fact, depending on the chosen approach, for the specific case of South Africa the middle class is claimed to make up between 16 and 60 per cent of the national population.[ii] Many of these definitions, which locate the middle class either in the literal middle of the income distribution or just above the two-dollar-a-day international poverty line, comprise an important share of the population that could be classified as poor by national standards. However, also having an income just above the national poverty line will often not be enough to be considered stably middle class, as many lack the means to sustain this standard of living and easily slip back in case of any negative event.

Given these considerations, we propose a multi-layered class schema, which we find particularly useful in the emerging and developing country context marked by high economic insecurity. The proposed schema displayed below starts from a standard division of society into three classes: the poor, the middle class, and the elite. We understand the poor as those who are presently deprived in terms of their basic food or non-food needs; this is, they fall below the national cost of basic needs poverty line.[iii] Similarly, we understand the elite as those in society who enjoy a standard of living well above the national average. Using a model of poverty transitions, which estimates the risk to future poverty given an individual’s current poverty status and household characteristics, we add further nuance to this standard class structure.

Among the poor, we distinguish those with below average chances of exiting poverty and thus a comparatively high risk of poverty persistence – who we term the chronic poor – from those with above average chances of making it out of poverty – the transient poor. Analogously, among the middle class, we distinguish those who face an above average risk of slipping into poverty – who we refer to as the vulnerable – from the more economically stable and secure ‘actual’ middle class, who have a below average risk of entering poverty.[iv]

We apply the above schema to four waves of panel data (each spaced approximately two years apart) from the National Income Dynamics Study (NIDS) covering 2008 through to 2014/15.[v] Over this time period, on average, 16.5 per cent of the poor escaped poverty from one wave to the next. This is the cut-off point that separates the chronically poor from the transient poor. Analogously, the average probability of falling into poverty for the initially non-poor was 25.9 per cent. This probability cut-off will separate the vulnerable from the middle class. Given the proposed stratification scheme, we find that between 2008 and 2014, on average, about one out of four (24 per cent) South Africans could be classified as stably middle class or elite. In addition, about 14 per cent of the population fell into the group of the vulnerable. In other words, a substantial share of the non-poor was still facing a considerable risk to falling into poverty. In fact we observe that almost every second individual of the vulnerable group had fallen into poverty between two survey waves.

The middle class, by contrast, was much more stable. About four out of five members of the middle class either retained their class status or moved into the elite, while less than every tenth member fell into poverty. Among the chronic poor that, according to our definition, make up 80 per cent of total poverty in South Africa, only one out of ten members managed to escape poverty, whereas among the transient poor, four out of ten individuals had escaped poverty within two-years time.

Given the above classification, what would a typical member of the South African middle class look like? On average, members of the middle class tend to live in nuclear households composed of two working adults and one child. The head of household is typically male, African, about 46 years old, has completed secondary education, is employed with a permanent work contract and union coverage, and the household is likely to reside in an urban area in Gauteng province, where Johannesburg and Pretoria are located. Using our estimation results, this reference person would face a predicted probability of falling into poverty of 8 per cent, and, in case of having fallen into poverty, would have an average chance to exit poverty of 38 per cent. A yet more stable job in the public sector would further half the risk to falling into poverty and raise the predicted chances of poverty exit to above 47 per cent.

Compared to the middle class, household heads in the vulnerable group are often somewhat younger and female, which almost doubles the predicted likelihood of falling into poverty. If we account in addition for the lower average level of education, this leads to a further rise in the predicted poverty risk by 8 percentage points, while the chance of poverty exit drops to just below 30 per cent. Vulnerable households are moreover larger, normally counting two adults and two children, and often there is only a single earner, which is associated with a higher in the risk to poverty. Higher job insecurity can present an important source of vulnerability. Most household heads in the middle class and elite are formally employed with a permanent work contract and union coverage. Among the vulnerable and the transient poor class, by contrast, time-limited work contracts and casual employment are more common, and a larger share is either unemployed or economically inactive. These less stable employment relationships are associated with an elevated risk to poverty.

The wave of upbeat stories on the developing world’s emerging middle class has reinvigorated a debate on how social class in general and the middle class in particular ought to be defined and empirically measured. As we have shown, not everyone who moves above the poverty line in one year can be considered stably middle class, as many lack the means to sustain this standard of living and easily slip back in case of any negative event.

To qualify as middle class, the number of household members in employment and particularly the employment status and security of employment of the household head are key determinants. Creating jobs and reducing persistent inequalities will thus remain central challenges that South Africa’s government, as many others, will need to address in order to lift larger parts of the population into the middle class and prevent backslides into poverty. In this regard, policymakers are likely to face an important trade-off between flexible labour market arrangements to foster job creation, and the creation of fewer, but better and more stable jobs that will allow more people to permanently escape from poverty.

[i]. For a sociological study on the motives to self-identify as middle class, see M. Phadi and C. Ceruti, “The Multiple Meanings of the Middle Class in Soweto, South Africa”, African Sociological Review, 15(1), 2011, p. 87-107.

[iv]. The central idea to identify the middle class based on a latent measure of economic security or (in)vulnerability to poverty has been pioneered by L. F. López-Calva and E. Ortiz-Juarez: “A Vulnerability Approach to the Definition of the Middle Class”, The Journal of Economic Inequality, 12(1), 2014, p. 23-47. Our approach aims to expand on their work by using a more comprehensive model of poverty transitions that accounts for state dependence and additionally allows to differentiate between transient and chronic poverty.

Strengthening Sovereignty in the Era of Global Value Chains
END_OF_DOCUMENT_TOKEN_TO_BE_REPLACED
The CPTPP and UK’s accession: What global implications?

The UK is the first State which formally applied to join the CPTPP. Its bid was accepted in...