A Year after the Start of the Saudi-Emirati Blockade against Qatar. What Are the Consequences for West Africa? L'Afrique en questions, n° 42, 8 October 2018

On June 5th 2017, Saudi Arabia, the United Arab Emirates, Egypt and Bahrain broke off diplomatic relations with Qatar and agreed to isolate the Emirate via an air and land blockade. 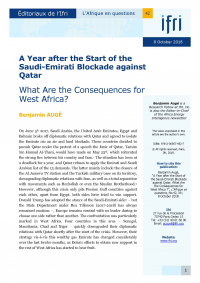 These countries decided to punish Qatar under the pretext of a speech the Emir of Qatar, Tamim bin Hamad Al-Thani, would have made on May 23rd, which reiterated the strong ties between his country and Iran.[1] The situation has been at a deadlock for a year, and Qatar refuses to apply the Emirati and Saudi Arabian list of the 13 demands. The latter mainly include the closure of the Al Jazeera TV station and the Turkish military base on its territory, downgrading diplomatic relations with Iran, as well as a total separation with movements such as Hezbollah or even the Muslim Brotherhood.[2] However, although this crisis only pits Persian Gulf countries against each other, apart from Egypt, both sides have tried to win support. Donald Trump has adopted the stance of the Saudi-Emirati side[3] – but the State Department under Rex Tillerson (2017-2018) has always remained cautious –, Europe remains neutral with no leader daring to choose one side rather than another. The confrontation was particularly marked in West Africa. Four countries in this area – Senegal, Mauritania, Chad and Niger – quickly downgraded their diplomatic relations with Qatar shortly after the start of the crisis. However, their strategy vis-à-vis this wealthy gas Emirate has changed considerably over the last twelve months, as Doha's efforts to obtain new support in the rest of West Africa has started to bear fruit.

Although Mauritania and Niger are maintaining their position, Chad and Senegal are changing theirs

Of the four countries which recalled their ambassadors in early June 2017, it was clearly Senegal's[4] position which surprised Qatar the most. The Saudis have exerted extremely strong pressure on this country through emissaries sent by the King to convince Macky Sall to support the Qatari ban. From the beginning, Senegal's position was considered as an anomaly in Doha. Qatar has used a very effective guilt-inducing rhetoric to drive home that support for the Saudi-Emirati position endorsed regime change in Doha – which is the end goal of the anti-Qatar coalition. After several conversations with the Emir of Qatar, Macky Sall finally reinstated his ambassador to Doha in August 2017.

On the other hand, the recall of the Mauritanian ambassador did not completely surprise Qatar. Relations between the two countries have been fairly cool since Mohamed Ould Abdel Aziz came to power in Nouakchott in 2008. The small amount of investment made by Qatar in Mauritania, despite the many promises, ended up frustrating the authorities of the Islamic Republic. While in comparison, the Saudi Fund for Development (SFD) has financed countless projects in Mauritania.[5] The Mauritanian government also used the argument that Qatar would support the Tawassoul political movement (allied to the Muslim Brotherhood), which today represents the most organised opposition party to President Mohamed Ould Abdel Aziz. To date, there is no question of resending a Mauritanian diplomat to Doha, and the last ambassador is still waiting for a reposting.

Regarding Niger, the decision to recall the ambassador to Doha, made by the president without consulting the Ministry of Foreign Affairs, was influenced by the Saudi Arabian Ambassador to Niger, Saud Abdulaziz Al Dayel, as well as the Chadian president, Idriss Deby Itno. Niger had just opened its embassy in Doha in 2015 with the –despondent– hope of attracting funding. The Nigerien ambassador's recall has hardly had any consequences regarding investment and financial transfers. Once again, compared to Saudi aid, particularly from the SFD[6], Qatar has not made any significant action towards Niger, mainly because of their relatively recent relations.

Finally, Chad's position has changed the most. After having recalled its ambassador in June, President Idriss Déby broke diplomatic relations on June 23rd 2017 and closed its embassy in Qatar, giving ten days’ notice to diplomats in N’Djamena to leave the country. To justify this action, the Ministry of Foreign Affairs referred to, “the continued involvement of the State of Qatar in attempts to destabilise Chad from Libya.”[7] Here, Chad is mainly aiming at Deby’s nephew, Timan Erdimi’s activities, who for several years, has been trying to organise troops from southern Libya against the Chadian government.[8] Yet, since 2010 Erdimi has been sheltered in Qatar, following an agreement between Sudan, Chad and the Emirate, ensuring his removal from the Sahel region after increasing attempts at destabilisation from Sudanese territory. In another turn of events, six months after the break-off in relations, on February 20th 2018 the Chadian Minister of Foreign Affairs, Cherif Mahamet Zene went to Doha to resume diplomatic relations and discuss the reopening of embassies. Despite the very good relationship that the Chadian president has forged with the United Arab Emirates since the start of the crisis – such as the appointment of his son, Zakaria Idriss Déby, as the first Chadian ambassador to the country shows –, Chad's deteriorating financial situation forced a closer move to Qatar. Indeed, the Qatari investment fund, the Qatar Investment Authority, happens to be one of the shareholders of the commodity trader Glencore, which is one of the leading holders of Chadian debt. Therefore, Qatar agreed to renegotiate the loans – by granting years of reprieve and by lowering interest rates – in exchange for a resumption of diplomatic relations.[9] A Chadian ambassador to Doha was appointed on August 23rd 2018 by President Idriss Déby.

Qatar is tentatively trying to react

Apart from using its economic power (see the case of Chad), Qatar has also implemented a strategy of seduction in West Africa, crowned by the Emir's visit to Burkina Faso, Ghana, Côte d’Ivoire, Senegal, Guinea and Mali from December 20th to 24th 2017. The purpose was to thank the countries that had not chosen Saudi Arabia and the United Arab Emirates, and to support them through development programmes. Although Burkina Faso opened its embassy in 2015 and Mali in 2016, Ghana, Côte d’Ivoire, and Guinea still did not have representation in Doha when the Emir visited. Ghana opened its own shortly after this visit. As for Côte d’Ivoire, an embassy was opened in 2018 and President Alassane Ouattara visited Qatar on September 16th and 17th. In the absence of an African policy, this strategy of increasing diplomatic representations provides a dynamic picture of relations with Africa.

However, the Qatari Ministry of Foreign Affairs must cope with the lack of available diplomats and civil servants working in Africa (outside of the Maghreb – ranging from Mauritania to Sudan). On this continent, the Emir and his minister, Mohammed ben Abderrahmane Al-Thani are relying heavily on former African Ministers (such as the Senegalese Karim Wade) or on “unofficial” advisors (such as Mustapha Ould Limam Chafi).[10] Nonetheless, the Qatari leaders do not have real national experts on sub-Saharan Africa. This situation leads to irregular monitoring of investment announcements, which further exacerbates the lack of trust between partners, as it has happened with the case of Mauritania.

Africa is the only area in the world where the countries have decided, under pressure from actors in the current conflict, to take a stance in this Gulf crisis. Apart from West Africa, Comoros and Gabon have also championed the Saudi side, and Djibouti has downgraded its level of representation in Doha. As for Somalia, although the central government has not taken a stand, Somaliland has clearly sided with the Emiratis. These stances are explained by a relative state weakness and a financial dependence of a certain number of Sahel countries on the outside world, which have quickly bowed under repeated pressure from Saudi Arabia or the Emirates, often accompanied by pledges. Furthermore, Saudi Arabia benefits from a long tradition of investment and lending in this region where the Sunni religion is mainly dominant and where the pilgrimage to Mecca has created strong and ancient ties with the authorities of these countries. It is also reaping the rewards of its policy of increasing scholarships for young Africans who came to study in Saudi Arabia from the 1980s (enabled by the growth in oil revenues after the 1979 Iranian Islamic revolution). Islamic studies are favoured by pupils from Sahel countries, Nigeria and Egypt.[11] When these pupils return home as graduates, their Saudi tropism may have a significant influence on the decisions of local political power. Currently, Qatar attracts mainly students from Asia and the Gulf who can afford to pay higher tuition fees in order to be admitted to the campuses of the major universities in Doha (HEC, Georgetown, Northwestern, Carnegie Mellon, Cornell, Texas A&M, etc.). Furthermore, Riyadh's strong control over international lending bodies, such as the Islamic Development Bank (IDB), based in Jeddah, which Sahel countries benefit extensively, or its influence in the Organisation of Islamic Co-operation (OIC) – whose head office is also in Jeddah – can only work in its favour in geopolitical conflicts such as that with Qatar. Although it denies it, emissaries from Riyadh have also discussed a reduction in the number of visas for the Hajj with countries that hesitated to take a stand.[12] On the other hand, Qatar is a recent actor in sub-Saharan Africa. Most of the embassies and ties that this state has forged on the continent are ten years old at the most. Due to weak personal ties at the highest level, investments are often promised but not made, and due to the lack of expert executives on Africa at the Ministry of Foreign Affairs, Qatar is paying a high price for its complete lack of policy and vision in Africa. Additionally, the different countries that took a stand early on sensed how this crisis could favour opportunities and create windfall effects by playing one actor against the other, in order to obtain significant financial support at a time when the economy, particularly in the Sahel countries, is fragile because of lower oil prices (Chad, Niger and Mauritania) and security issues.

[1]. However, this speech never existed and was posted on the Qatari News Agency’s website by hacking. Furthermore, the information was immediately denied by Qatar. See B. McKernan, “Qatar’s State News Agency Blames Hackers for Fake News Story Praising Israel and Criticising Allies”, The Independent, 24 May 2017, available at: www.independent.co.uk.

[4]. In 2015, the latter promised Saudi Arabia to send soldiers to fight alongside them in Yemen. However, the soldiers were never mobilised in the end despite a favourable vote in Parliament. One of the explanations is that the population is particularly hostile to it. It is also likely that Saudi Arabia did not pay the planned financial compensation.

[10]. For a number of years, Mustafa Ould Limam Chafi was one of the most influential advisors of the former Burkinabe President, Blaise Compaoré.

A Year after the Start of the Saudi-Emirati Blockade against Qatar. What Are the Consequences for West Africa?
Download
0.19 Mo
Keywords
diplomacy Gulf countries Qatar Saudi Arabia United Arab Emirates (UAE) West Africa
ISBN / ISSN:
978-2-36567-952-7
Print this article
Back to top

The Political Economy of the Metaverse
END_OF_DOCUMENT_TOKEN_TO_BE_REPLACED
Critical minerals: How to secure stable and resilient supply chains? Views from Europe...