From May 23 to 29, over 300 million Europeans are set to elect a new Parliament for a five-year term. 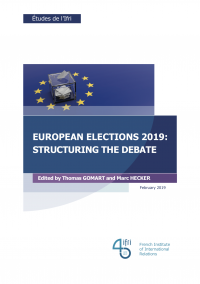 These elections come in a context of dwindling confidence in the legitimacy and certainty of “European democracy” and a surge of political forces openly hostile to the continuation of the European project.

In 2009, when the Lisbon Treaty came into force, the EU appeared to be among the world’s most stable regions, fully up to speed with globalization. Ten years on, this is no longer the case. Europe has fallen prey to a series of profound doubts, which threaten its cohesion and raise questions about its future.

Consisting of 17 short texts, this new Ifri analysis does not present an overview of the political forces in Europe on the eve of the elections, but rather seeks to succinctly identify the key issues facing the EU in the short, medium, and long term, at a time when it appears more fragile than ever. Clearly, its oft-proclaimed disintegration would transform European countries into third-rate actors, set against the logics of power currently at work and the weakening of multilateralism.

Europe and the challenge of trade wars, Sébastien Jean

Negotiations on a transatlantic free trade agreement monopolized debates around trade during the 2014 European election campaign, with questions about how to shape globalization in line with European values and policy objectives. Five years on, those debates appear to have been left far behind. The landscape has been turned on its head and the issues have radically changed. The rules-based multilateral trading system, which many saw as an unchanging backdrop, is now under threat. The European Union (EU), multilateralist in both its principles and interests, is facing fundamental challenges on two different fronts.

Are we immune from a new Eurozone crisis? Julien Marcilly

At first glance, the question appears misplaced, as the monetary union’s recent economic trends greatly contrast with those of 2012. After five consecutive years of positive GDP growth, the eurozone’s unemployment rate has dropped from 12% in 2013 to just over 8% in 2018. Wage growth is now at its highest in a decade, while government budgets have almost been rebalanced. Finally, significant progress has been made with regard to convergence: standard deviations for national growth and inflation rates are at their lowest level since the euro was launched.

Could the Brexit saga be coming to an end? If we are to believe the official timetable, the United Kingdom will leave the European Union (EU) for good on March 29, 2019, more than two and a half years after the referendum. Yet, never has the outcome of Brexit seemed so uncertain. It is therefore hard to know whether Brexit will indeed go ahead at the end of March or be postponed. As things stand, what lessons can we draw from this episode, which has been as exhausting as it has been unpredictable?

Despite recent progress, the debate on Social Europe still suffers from the lack of clear analysis, shared by all stakeholders, on the EU’s role in the social field. Although social and employment policies remain national prerogatives for the most part, various arguments call for the reinforcing of “Social Europe.” How can Europe, which is perceived as ‘liberal’, reinforce its social dimension?

Since 2015, the crisis around the issue of migration in Europe has constituted an unprecedented shift in the history of European integration. Naturally, the crisis concerns technical aspects of migration policies, such as what to do about Schengen? How should the Dublin Regulation be reformed? What partnerships should be entered into with third party countries? But these questions cannot be answered if we do not place them at the heart of the challenge that Europeans must face in the coming months: the implementation of the principle of solidarity between member states and the rapid transformation of political identities across Europe.

Europe and the challenge of terrorism, Marc Hecker

It is undoubtedly provocative to speak of a “new Euroterrorism”, as both the ideology that fuels the threat of today—Salafi-Jihadism—and the way in which its attacks are carried out are so different from those of the past, although the prospect of a revival in ultra-left-wing or ultra-right-wing terrorism must not be discounted. Nonetheless, a common sense of danger has emerged, and the political will to “do more” at the European level to combat this threat has grown palpable. What can the EU do to counter transnational terrorism?

The first—and fundamental—question concerns the relationship between European defense (CSDP) and the defense of Europe (North Atlantic Treaty Organization, NATO), at a time of increasing doubts over the transatlantic relationship. It should be recalled that the CSDP covers only a part of the continent’s defense. What will be the division of labor? And how can coherence be ensured insofar as the same national forces are called upon by both the EU and NATO? Behind these more technical questions clearly lies the issue of the future role of the United States in the defense of Europe.

The energy security of the European Union: between old demons and new risks, Marc-Antoine Eyl-Mazzega

The risks and challenges associated with low-carbon energy transition are broader. With 30% of electricity produced from renewable energy sources (RES) in the EU, increased targets for the use of solar and wind power, the planned shutdown of German nuclear reactors in 2022, the expected gradual decline of coal, the transformation of energy systems alongside the “3 Ds”—decentralization, decarbonization, and digitization—and uptake of electric vehicles, new challenges are emerging. How can the costs of rolling out renewable energy be reduced while guaranteeing affordable electricity supply?

In Europe more than anywhere else, and in 2019 more than at any time in the past, climate change is at the heart of citizens’ concerns. And, in facing this global threat, there is absolutely no doubt of the value of coordinated action at the level of the European Union (EU). The challenge of climate change must also be seen as an opportunity to rally citizens, and to revitalize the economy and the European political project.

Europe’s ability to assert itself as a “digital power” is subject to mixed responses. The view of Europe as a “digital colony” is fundamentally opposed to a more nuanced approach that emphasizes the European Commission’s current voluntarism in terms of data protection, digital taxation, and artificial intelligence (AI).

Has the Franco-German engine broken down? Hans Stark

The Franco-German engine was never intended to run continuously nor at full speed. Its role is not of course to dictate decisions, but to stimulate fresh momentum at times of crisis, thereby breaking a deadlock. The leadership that is expected of the Franco-German duo must always be in a position to act (and not impose itself) in a context of complex decision-making at the level of twenty-seven member states (or nineteen in the case of the eurozone). It must have genuine resources at its disposal, including financial and political resources, in order to make itself heard and accepted as legitimate.

Toward a "cultural counter-revolution" in central Europe? Éric-André Martin

Since 2015, the European migration crisis has served as a catalyst for growing or strengthening the power base of populist movements in the Visegrad Group of countries (V4). These countries have developed an anti-European discourse, denouncing the challenges to sovereignty represented by decisions made in Brussels. Their revolt against the decisions of the European Council relating to the relocation of asylum seekers, and even more so the refusal by Poland and Hungary to accept the slightest resettlement on their territory, have resulted in a crisis of governance within the European Union (EU).

Will the United States and Europe maintain their special relationship based on shared values? Will globalization and demographic change lead instead to an inexorable distancing between the two shores of the Atlantic? On the European side, this age-old debate gives rise to anxious questions, as the nations of the Old Continent fear a distancing from the United States that would weaken their influence and their security.

Despite talk of a “strategic partnership” between post-Soviet Russia and the European Union (EU), the relationship between these two “partners” has never been an easy one. Frequent summits (held twice a year) and an array of cooperation mechanisms (including the four common spaces and the Partnership for Modernization) have been unable to prevent the deterioration of relations following the annexation of Crimea. After the EU imposed sanctions on Russia, Moscow responded in turn by placing an embargo on imports of many European agricultural and food products. Since then, the litany of grievances has continued to grow on both sides. Disappointments run deep and trust has been broken. Neither party is prepared to acknowledge even part of their responsibility for the situation, believing that it is up to the other side to soften its position.

As tensions between China and the United States increase, Beijing is seeking closer ties with Europe. A charm offensive has been underway for almost a year in many EU member states, including France. Official Chinese communications refer to the existence of a “United States-China-Europe strategic triangle”, highlighting points of divergence between the United States and Europe, and dwelling on points of convergence between China and Europe.

The European Union and Turkey: a change of tone, Dorothée Schmid

While the prospect of Turkish membership is ebbing away—with most EU member states now openly opposed to it, and Euroscepticism commanding a dominant position in Turkey—the Turkish-European relationship has grown in importance and is re-emerging as a major geopolitical conundrum. From the outset—the Ankara Agreement of 1963, which laid the foundations for cooperation to eventually allow Turkey entry into the European group—relations between Turkey and the EU have raised questions about the identity of the European project, that of the EU’s physical borders, and following on from this, that of Europe’s external alliances.

The European Union and Africa: the central importance of migration, Alain Antil

Since the European Union (EU)-Africa Summit in Valletta in November 2015, migration issues have taken center stage in the relationship between the two continents. This summit resulted in an action plan providing for the joint management of migration flows. To this end, the partners pledged to combat irregular and forced migration and strengthen channels for legal migration and mobility, while protecting the human rights of migrants and tackling the “root causes of migration”.

The Political Economy of the Metaverse
END_OF_DOCUMENT_TOKEN_TO_BE_REPLACED
Critical minerals: How to secure stable and resilient supply chains? Views from Europe...