The exploration of space and the use of digital tools and systems have in common to be quite recent in human history but to have changed the world, society and economy by connecting people and things, breaking down borders, and redistributing knowledge, power and control. 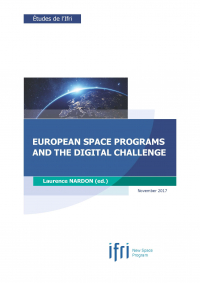 New Space is a new paradigm in the space industry. Long considered a conservative sector dominated by governments and large aerospace and defense industries, the space sector is currently experiencing a remarkable transformation, as a result of several factors disrupting its traditional environment and players. The European space industry is dealing with new actors from digital technology, which are mainly American start-ups or Silicon Valley giants such as GAFA (Google, Amazon, Facebook and Apple).

The latter use new methods such as increased use of private financing, faster production and decision-making cycles, and a rebalancing of priorities between designers and clients.

In spite of the continuous development and successes of space activities in the world, pushing the frontiers of knowledge and serving economy and society through new services, space has not been able to catch up with the pace of the exponential digital acceleration. Even if the respective paces will continue to be different, the mutual interests between these two continuing revolutions are such that each has started to support and feed the other – and this is just the beginning! The digital transformation is a fantastic opportunity for space for at least three main reasons on which cooperation between the two is building up: Big Data, design and manufacturing, culture and dynamics.

In keeping with its long-standing research effort on space policies, it was very natural that Ifri should try to make sense of the New Space phenomenon, and present the results of its analysis to a large audience. The way we chose to do this was by asking actors and experts to explain what they think are the most important transformations brought by New Space to their specific areas.

This note starts with a foreword by Jean-Jacques Dordain, who headed the European Space Agency for 12 years and who is in a unique position to describe and compare the digital and space conquest. The note then starts with a description of the wide-ranging issues raised by the digital revolution for humankind (Julien Nocetti) and with an analysis and history of its impact on space (Steve Bochinger).

The study then addresses the different industrial sectors of space, showing how they are impacted by the New Space phenomenon: launchers and in particular the Ariane 6 program (Guilhem Penent); observation satellites, where a mass market may be appearing at last (Stéphane Janichewski); satcom, where the lion share of space revenues remains to this day (Sebastien Moranta and Matteo Cappella); downstream applications, with the very interesting case of Sigfox, a French startup using satellites for its innovative IoT application (David Fernandez). This first part ends on a sobering note, with a chapter addressing the vulnerability of space architectures to cyber attacks, and what is being done to mitigate the risk (Géraldine Naja and Luca del Monte).

Next, the note turns to geographical perspectives. Jean-Michel Huet and Alejandro Rojas analyze the role satellites play in the vital development of internet and mobile phone access in Africa; Narayan Prasad discusses the impact of New Space on the Indian, Chinese and Japanese space programs, all very different; Joanne Wheeler gives an in-depth description of the renewed British space program, an endeavor that has put the emphasis on trying to adapt the model of the digital world to space; finally, Olivier Sichel advocates for a reinforced French-German effort to develop their digital strength.

It is by choice that we decided that the conclusion of the note would be devoted to a description of the role and responsibilities of the EU in the development of a sustained European space and digital governance. Olivier Lemaitre points the evolution, successes and challenges met by the EU in an area that is key to its future.

Neither surveillance nor algorithmic consumerism. Towards...
END_OF_DOCUMENT_TOKEN_TO_BE_REPLACED
Citizen Mobilization: A Solution for Refugee Integration in Europe?