After twenty years of counter-terrorism, the Ukrainian battlefield marks the renewal of so-called “high-intensity” warfare. It constitutes a major strategic turning point, reversing the contemporary model of wars involving the West. 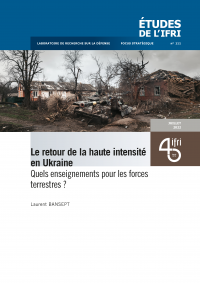 This massive invasion of a country by a powerful conventional army is largely played out on the ground. It sheds light on the preparation of ground forces for a major engagement hypothesis. For the Ukrainians, the war corresponds to a high-intensity conflict, both political, because it involves their vital interests, and capability-based, mobilizing all of their military means. For Russia, on the other hand, the high intensity is more about capabilities than politics.

This conflict is taking place in the form of a linear war characterized by a reemergence of the front, a phenomenon that has become rare, although it has already resurfaced in Syria and Iraq. As in these theaters, the war in Ukraine confirms that cities remain the priority areas, justifying the efforts made by the French Army to train in this environment. Urban warfare requires high material capabilities in terms of fire, manpower and logistics, but also moral strength. In this respect, the Ukrainian conflict reminds us of the role played by the population, mobilized in support of the defense apparatus. The high attrition rate raises the question of human losses and the “tolerance threshold” if France were to be engaged on battlefields with a similar lethality.

High intensity characteristics have an impact on all operational functions.

The Ukrainian conflict and its repercussions on strategic stability in Europe highlight the role played by ground forces in “winning the war before the war”. It implies a reinvestment in the functions of “deterrence” but also “prevention” through strategic signals such as participation in the reassurance of North Atlantic Treaty Organization (NATO)’s eastern flank. Each military exercise must be thought of as a display of will. For greater credibility, it is necessary to maintain a high level of training of armed forces. Having a unique operational experience among European armies in this field, France must invest fully in the military structures of NATO and the European Union.

This signaling is also embodied in the readiness actions of foreign forces through Partnered Military Operations (PMOs). In certain politically sensitive contexts, special forces can play a unique role in implementing this type of partnership in a discreet manner.

It is essential to guarantee freedom of action through sufficient mass. From this perspective, weapons deliveries to Ukraine raise three questions: the impact of sending in-service equipment such as Caesars on the French order of battle; possible technology transfers linked to the delivery of modern equipment; and the ex-post control and monitoring of these weapons deliveries.

Finally, the triple surprise of the Russian offensive, the Ukrainian resistance and the scale of the international reaction testify the need to appropriate the adversary’s rationality and the difficulty of anticipating his reactions. Acting as a strategist in the face of systemic competitors requires sustained efforts in the field of “knowledge and anticipation”.