France’s current presidential campaign has created an unprecedented situation fuelled by revelations and a total absence of restraint, but it has not truly taken account of the disruptions of the last year: Brexit, the attempted coup in Turkey, the election of Donald Trump, the recapturing of Aleppo by Bashar al-Assad, Xi Jinping’s declarations about “economic globalization”, or the behavior of North Korea. The debate, or rather its absence, can be looked at in two ways. 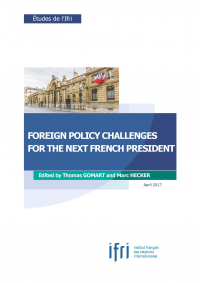 First, the lack of any serious discussion about the future direction of French foreign policy is symptomatic of our difficulty in accepting and explaining the current reconfiguration of globalization, which is being driven mainly by a new solution to the distribution of power between countries and by the growing pace of the digital transition around the world. France is not an island that can cut itself off from the world and break with its secular history, so the lack of any real method to explain how the international system works is striking. Somewhere, between pipe dreams and nightmares, there is space for sober reasoning to describe and manage the strategic, political, economic and cultural inter-dependencies that France both shapes, and is shaped by.

Second, the absence of meaningful responses to the expectations, demands and challenges of our allies, partners and enemies shows that France is in political retreat and is incapable of coming up with a convincing narrative, due to a lack of credibility. Although it is true that elections are won on domestic issues, it is nevertheless impossible to imagine the future of the country without closely examining its international commitments. Between intellectual parochialism and bombastic universalism, there should exist a space in which one can talk with at least a modicum of seriousness about the European project, beginning with the premise that France is an international player. Unfortunately, this has not proved possible in the current campaign.

Bringing together 15 brief analyses, this report is part of an Ifri project to contribute to the presidential debate.

The goal of this study is not to analyze the programs of the various candidates (presented with the help of 15 info-graphics on various themes) but to identify the most important foreign policy issues and to explain the options that the eighth President of the Fifth Republic will face on the morning of May 8, 2017, whoever that might be.

As French citizens go to the polls, the alarming state of our public finances is almost absent from the Presidential debate. It is critical, however, that we show ourselves capable of balancing the books over the long term. [...] At stake is not only France’s credibility on the world stage and in the eyes of its European partners, but also the confidence of investors, which is crucial to refinancing France’s debt. We must bring down the deficit. This requires structural reforms as well as cuts and changes to public spending, in the interest of growth and social cohesion.

Trade policy occupies a paradoxical place in this year’s French Presidential campaign, the most forthright statements and a large part of the debate focusing on a return to protectionism. Yet we should bear in mind that trade policy has been an exclusive authority of the European Union (EU) since January 1, 1970, in line with the principle of the free movement of goods within the EU. French protectionism would only be a practical possibility, therefore, if France left the EU. But that would be a different world from the one we now live in and that would involve dismantling the European architecture. To do so would be very dangerous and would have immense consequences across the board.

Energy and Climate: The Challenges of the Transition, Marie-Claire Aoun

Dealing with the issue of climate change has been a priority for President François Hollande. The historic agreement adopted by 195 countries in Paris in December 2015 to limit global warming to less than 2°C was undoubtedly a victory for French diplomacy. To support global efforts to combat climate change, France has sought to set an example domestically by passing an ambitious energy transition law in July 2015. [...] Despite this well-developed institutional edifice, however, Paris must now confront multiple challenges if it is to implement its plans, such as the uncertainty over the cost and financing of the transition.

Terrorism: Five Challenges for the Next President, Marc Hecker

Among Western countries, France is a prime target for radical Islamic terrorism. [...] Daesh does not hide its intention to destroy France’s national cohesion by aggravating tensions between Muslims and the rest of the population. This baleful strategy is particularly dangerous at a time when France is going to the polls: a terrorist attack could influence the ballot and spring the trap of uncontrolled escalation. After the election in May, the next President will have to confront five main threats.

For many years, France’s position on security and defense has been exposed to severe pressure. This pressure comes partly from external factors related to the transformation of the strategic environment since 2011, and partly from internal factors. Over the last twenty years, the French defense apparatus has passed through phases of growing tension between the escalating demands placed on the military and barely adequate levels of funding. [...] The next five year term will therefore be the moment of truth for French defense.

More than ever before, the strategic autonomy of states depends on the extent to which they can master the digital domain. [...] Lastly, Paris must embrace the “fourth technological revolution” and avoid being misled by the hype around “French Tech”. Convergence of the information economy, robotics, the internet of things and artificial intelligence will have a greater disruptive effect on the international environment. The main challenge is therefore about what conditions are required to develop an ecosystem that will be crucial to France’s economic modernization and also, therefore, to its international position.

The Reframing of the Migration Challenge, Christophe Bertossi and Matthieu Tardis

Since the summer of 2015, the challenge of migration has formed part of a wider crisis that has strained the cohesion of the European Union (EU), caused by a lack of consensus and solidarity among member states when it comes to accepting migrants who have arrived via Greece and Italy. [...] Since September 2015, the EU has buckled down on the task of responding to the humanitarian emergency on its territory and of laying the foundations for a new Common European Asylum System. [...] In view of its history and the values it proclaims, France is in a good position to drive this agenda forward.

The Franco-American Relationship at the Heart of Transatlantic Relations, Laurence Nardon

The election of Donald Trump as US President has ushered in a period of uncertainty in Franco-American relations. [...] Paris has always thought of itself as a non-aligned ally of Washington. François Hollande was speaking in that tradition when he criticized the isolationist attitude of the new White House. Will this position change over the next five years and what options does France have in the face of the new President’s negative attitude towards Europe?

The “Russian question” has moved to centre stage once more since the annexation of Crimea in 2014. Having dogged the US elections, it is now a topic of division in the French electoral debate. The next President will inherit a bilateral relationship that has been damaged by the sanctions linked to Russia’s annexation of Crimea and the war in Eastern Ukraine, the termination of contracts for the Mistral amphibious assault ships, the cancellation of Vladimir Putin’s visit to Paris in October 2016, and Franco-Russian disagreements over Syria at the UN Security Council.

France in the Middle East: Engagement as Duty?, Dorothée Schmid

By necessity, the Middle East looms large in the programs of the political parties. French military engagement in Syria and Iraq, the threat of terrorism and rising tension in France in reaction to identity-based politics (ethnic and religious), whether real or imagined: all of these are preoccupying French public opinion. François Hollande has had to deal with these three pressing challenges, despite being unprepared, and the French electorate expects the next President to formulate a consistent response.

From the point of view of French foreign policy, Asia represents many things: it is a vital region from an economic standpoint, a key region in combating climate change, a mosaic of different political systems where France’s cherished values are more or less neglected, and a part of the world where security concerns take on systemic importance. Given all its different dimensions, defining a policy for Asia is by no means easy. Moreover, the attention that is rightly paid to the rise of China and its growing activism should not lead us to ignore the rest of Asia: instead, France should be active in many different directions.

France's Africa Policy Challenged by the Diversity of the Continent, Alain Antil

Presence in Africa is a key component of French power, or at least influence, and has always been a priority of French foreign policy. If it is to remain so, France must adapt to the profound changes taking place on the continent and to the processes that are shaping it.

Four Ways to Recapture the Initiative on the EU, Vivien Pertusot

2017 is a crucial year for the European Union (EU), with elections in the Netherlands, France, Germany and perhaps Italy. Negotiations over Brexit have officially begun, in what amounts to a historic break with the past. Torn by internal contradictions, the EU just celebrated the 60th anniversary of the Treaty of Rome, which provoked a surge of diplomatic activity in an effort to shore up the EU’s cohesion, though the outcomes have been limited. The next French President will assume office at a time of crisis, with France’s partners entertaining profound doubts about how serious the country’s engagement in Europe really is.

Franco-German Relations: Where to Next?, Barbara Kunz and Hans Stark

The French Presidential election will be followed in September by elections in Germany. The outcome of the French election will be crucial in defining France’s place on the European stage and, by extension, in shaping its relations with Germany, which are in real danger of breaking down. Having been a matter of consensus across the French political class for decades, policy towards Germany is now the subject of deep disagreement.

In recent years, France has taken a multilateral approach when dealing with economic, climate or security issues. One of the challenges it now faces is how to react to the rapid restructuring of global governance driven by China. [...] It is in the interest of both France and Europe to pool their investment in multilateral institutions and to build a strategy for global governance that is not wholly defensive or simply a reaction to China’s strategy.

Mitigating Geopolitical Risk – Japan as a Stabilizer in...
END_OF_DOCUMENT_TOKEN_TO_BE_REPLACED
Has the European Union risen up to the challenges of geopolitics? Europe after the Czech...