Implications of the Global Supply Chain Reform: A Taiwanese Perspective Asie.Visions, No. 127, May 2022

How have both the private and public sectors in Taiwan sought to mitigate the challenges posed by the reform agenda for global supply chains (GSCs)? 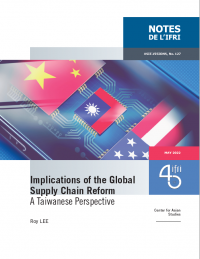 Participation in GSCs has long been a central pillar of Taiwan’s economic development. Over the last four decades, the mode of participation has evolved from labor-intensive assembling to electronic contract manufacturing (ECM) of information and communications products, semiconductors, and other high-tech products. Many Taiwan ECM companies are now world leaders, especially in the semiconductor and information and communications technology (ICT) contract manufacturing sectors, with more than 50% of global market share across many product lines. Market share reflects not only the competitiveness of these companies but more importantly the level of involvement in the GSCs. One unique element behind Taiwan’s success in GSC participation is the rise of China and the robust ECM production networks that were established across the Taiwan Strait. As of 2021, a significant portion of Taiwan ECM companies were still delivering their orders through their production facilities in China.

As a major stakeholder in the GSCs, the unprecedented and growing pressure of GSC reform is having a strong and direct impact in Taiwan. The first source of pressure came from the soaring production costs in China and the rise in Chinese supply-chain competition. Strategic industry policies such as the “Made in China 2025” that favor domestic competitors over Taiwanese and other foreign firms further increase the persistent pressure to operate in China. The second and more acute wave of pressure comes from the US-China economic rivalry, while the Covid-19 pandemic has further intensified the pressure for supply-chain diversification. Finally, major economic powers, including the US, the European Union and Japan, are all pursuing economic “strategic autonomy” that aims at increasing national manufacturing capacity, forging new trusted alliances and reducing reliance on China.

Taiwan ECM companies reacted swiftly to the trade and technology war between the US and China. Production in China has been scaled back rapidly in recent years, especially of ICT products. Diversification efforts started with the jumpstart and expansion of production capacities in Taiwan, with new investments in Vietnam, Indonesia, the US and the EU. Supply-chain reform (in particular the homecoming of ECM companies) also amends trade patterns. The US, for instance, returned in 2019 as Taiwan’s second largest export market after China. The Taiwan government, on the other hand, initiated large facilitation programs to welcome the homecoming ECM companies, and other trade and regional programs, including the “New Southbound Policy” to assist the GSC reform process.

This paper underscores several structural uncertainties and challenges. The first is associated with an international economic environment that is increasingly dominated by economic security and strategic autonomy policies. The structure and operation of the GSCs are likely to depart from economic rationales to accommodate geopolitical considerations. In the long run, the possibilities of over-supply and other distorted consequences are high. The second risk is “supply chain nationalism”, i.e. the emergence of advocacy for preferential treatment for domestic suppliers based on the nationality of the supplier. Finally, argues the author, the risk of decoupling between China on one hand and US-led democratic countries on the other is also increasing.