Questions of Fact: India’s Aadhaar Matter and the Limits of the Supreme Court Asie Visions, No. 101, October 2018

In September 2018, the Supreme Court of India rendered its verdict in a landmark case with major implications for the Aadhaar biometric identification project as well as the application of right to privacy in India, but the Aadhaar Matter raises important questions about the shortcomings of the Supreme Court’s practice of judicial review. 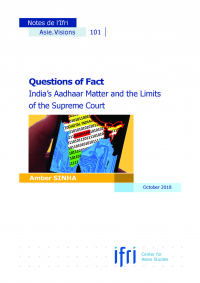 On May 10, 2018, the Supreme Court of India concluded its hearings on a landmark case with major implications for the Aadhaar biometric identification project as well as the application of right to privacy in India. In K.S. Puttaswamy and others vs. Union of India (“Aadhaar Matter”), a five-judge bench led by Chief Justice Mishra heard arguments surrounding the creation of the largest biometric identification system in the world – a 12-digit “unique identification” number, or Aadhaar Number generated for every Indian resident using data including iris scans, 10-digit fingerprints and a picture of the face. Proponents of the project argued that the new ID number would resolve issues such as welfare leakages and a lack of access to social benefits from India’s poor (arguments which have been largely been dismantled by social welfare researchers). Detractors have pointed to questions of inequality and more generally raised the point that the system violates core rights to privacy for the people of India.

The hearings spanned 38 days over five months and were the second longest in the nearly 70 years of the Indian Supreme Court’s history. While five months is in itself a long time, the Aadhaar Matter began six years earlier, in 2012, when Retired judge K.S. Puttaswamy filed a petition before the Supreme Court for the scrapping of the Aadhaar project. Over the next six years, twenty-nine other petitions were tagged together, contesting different aspects of the Aadhaar project and, after 2016, of its legislation under the Aadhaar (Subsidies, Benefits and Services) Act. Between 2013 and 2015, the Supreme Court also passed up to five different interim orders directing that no individual must suffer from not having an Aadhaar Number and that its use must be limited to a few specific government schemes. In the court’s final decision, delivered on September 26, 2018, justices ultimately ruled 4-1 in favour of upholding the Aadhaar program within certain constraints – for instance, it cannot be made mandatory for obtaining a bank account or mobile phone, nor in registering for school.

The Aadhaar project raises important questions about the shortcomings of the Supreme Court’s practice of judicial review. The problem is largely linked to the nature of Public Interest Litigations, which put the higher judiciary in a peculiar position of being the court of first instance as well as the final court of appeals. As such, India’s higher court system is required it to look into questions of fact without the tools that a trial court needs to have at its disposal. The effect of this oddity is especially pronounced in cases such as the Aadhaar Matter, which involves several complicated questions of fact. Moreover, the practice of affidavit-based evidence that the Supreme Court often uses compromises the justice system as the Court is unable to ascertain the veracity of the facts presented before it. The effect of this practice is all the more pronounced in light of the fact that the Supreme Court passes judgements which are binding on lower courts, and often deal with issues of great social, economic and political import.

Europe in the Face of US-China Rivalry
END_OF_DOCUMENT_TOKEN_TO_BE_REPLACED
Spain, the Green Deal and the energy transition Closed door energy breakfast...