East Africa has the potential to experience a gas and liquefied natural gas (LNG) export boom in the coming years due to several projects that have been released. 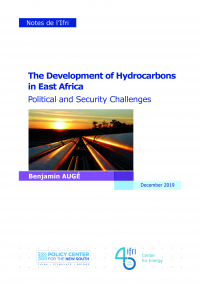 Mozambique has approved two projects totaling more than 15 million tons per year (Mt/yr.) of liquefied gas and a third should be started by the end of 2019. The first ENI Floating Liquefied Natural Gas plant (FLNG) will come onto the market in 2022 and four other onshore liquefaction trains, two of which will produce 6.44 Mt (Anadarko/Total) and two of which will produce 7.6 Mt (ExxonMobil/ENI), will be available around 2025. However, with the recoverable reserves, the companies involved are counting on 50 or even 60 Mt/yr. by 2030. This volume will help this East African country to achieve the world’s fourth-largest LNG export capacity in the medium term after the United States, Qatar and Australia. As for Tanzania, no development should be approved before 2020 in the best-case scenario.

With regard to oil, no project in Uganda or Kenya has been formally launched. No final investment decision should be made before 2020. In Uganda, the relationship between the oil companies and the government remains very difficult, postponing the implementation of developments.

Oil discoveries in East Africa are important at regional level (potentially up to 300,000 barrels per day, or 0.3% of the current global total), but their development is related to factors specific to each country, with each one having different political-economic trajectories from the other.

The governance of the hydrocarbon sector in countries, where discoveries have been detected (Uganda, Kenya, Tanzania and Mozambique), is struggling to be implemented as there are too few competent civil servants in this field.

Demands that maximize state control over the oil sector – a refinery in Uganda or the use of local arbitration courts in Tanzania – are likely to hinder the development of oil projects, even though these countries need the income as quickly as possible, in order to build basic infrastructure for their populations and demographic pressure is often extremely intense.

The politicization of the sector, as in Uganda and Tanzania, makes projects even more complex to finance. In Kenya, it is more local and ethnic dynamics in the future production area that complicate their development.

Although these security challenges seem largely contained in Uganda, nevertheless they are a key topic in Kenya (Al-Shabab) and in Mozambique (Ansar al Sunna), and perhaps soon in Tanzania with penetration by Islamist movements in the province where the LNG trains will be located.

The presence of hydrocarbons in the most disadvantaged regions in the countries considered in this paper – Uganda/Lake Albert, Kenya/Turkana, Mozambique/Cabo Delgado, Tanzania/Lindi-Mtwara, makes the oil and gas development very complex because of the increasing social demands. Water stress, land use, distribution of economic and financial benefits, and electricity are equally conflicting issues.