Quantum physics, a field little known to the general public and relatively difficult to grasp as its laws are counter-intuitive, constitutes nevertheless a critical field of international strategic competition. 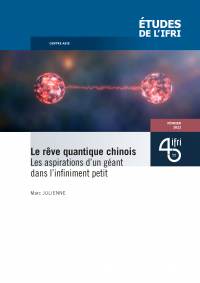 The world’s great scientific powers are organizing to unravel the mysteries of this science that appeared in the 20th century, and are angling to be the first to reap the benefits of the revolutionary applications it promises. Health, energy, industry, telecommunications, defense: the innovations quantum science promises to nurture are nothing short of revolutionary, as is the potential they hold to disrupt the global balance of power.

The People’s Republic of China, with a national development and growth strategy built on science and technology, is not to be outdone. Quantum physics is high on the country’s science agenda and the government is fostering a vibrant scientific ecosystem, centered around the Hefei-based University of Science and Technology of China (USTC).

As elsewhere in the world, Chinese scientists mainly focus on two key areas of quantum physics: computing and communication. The first aims to create a revolutionary computer that would break down the computational limits of today’s classical computer. China has already made remarkable progress in reaching the “quantum advantage” on two different quantum processor concepts (photonics and superconducting), thus competing with the American giants Google and IBM.

China is thus determined to take the lead in the international scientific competition in the field of quantum physics and hopes to derive all the benefits from its potential applications.

This publication is only available in French.

After Mali, what Commitment from Germany in the Sahel?
END_OF_DOCUMENT_TOKEN_TO_BE_REPLACED
Critical minerals: How to secure stable and resilient supply chains? Views from Europe...