Skip to main content
You are here
Home > French-Turkish Dialogue

Turkey's relationship with the European Union today is a major factor that determines how it conducts reforms, but it is important to look at the cost of this adjustment. The process of recovering the acquis communautaire is long and constantly faces problems posed by political projects (such as the stability of institutions, religious minorities, Cyprus, etc.).

The evolution of Euro-Turkish relations uncovers some of Turkey's internal fragilities. The Franco-Turkish relation partially illustrates these difficulties, but it also experiences the tensions associated with mutations the society, political systems and economic structure of the two countries endured.

In any case, it is important to evaluate the state of the political, economic and cultural relations between France and Turkey and to understand the reasons for their evolution. Down the road, it is important to tie new partnerships in order to secure the development of a realistic and harmonious interaction between the two countries.

Today, Ifri is positioned at the centre of a renewed Franco-Turkish dialogue, aiming to overcome generalisations, erroneous perceptions and circumstantial disagreements. Ifri aims to offer civil society actors,  the business community, the non profit sector and the media occasions to communicate in a safe space.

Conflicts in the EastMed: From Germany’s and France’s Conflicting Strategies to a Dual Approach Briefings de l'Ifri, September 3, 2021

By: Laura Lale KABIS-KECHRID
Over the past years, the Eastern Mediterranean has become centerstage of an increasingly internationalized and militarized conflict driven by different albeit interlinked issues and an arena for a growing variety of actors to project their geopolitical ambitions.
Publications - Briefings de l'Ifri
Turkey - French-Turkish Dialogue - The Turkey Observatory

France vs. Turkey in the EastMed: A Geopolitical Rivalry between a “Keeper” of the Old Order and a Challenging Emergent Power Briefings de l'Ifri, May 2021

The Franco-Turkish standoff is first and foremost a geopolitical contest for influence in the EastMed area. It must be understood in light of Turkey’s rise as an emergent power in quest for geostrategic autonomy and France’s unease with Ankara’s growing assertiveness in a region that Paris...

Is Escalation Between France and Turkey in the Middle East and Beyond Inescapable? Geneva Center for Security Policy, Syria Transition Challenges Project, November 2020

In recent years, France and Turkey have been on opposing sides relating to Middle East concerns. 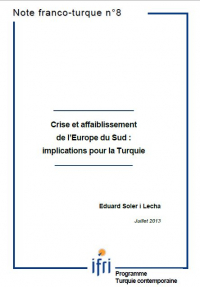 Crisis and Decline in Southern Europe: Implications for Turkey Franco-Turkish Paper, No. 8, July 2013

By: Eduard SOLER I LECHA

The twists and turns of the economic and political crisis in southern Europe are now an important parameter for relations between Europe and Turkey. 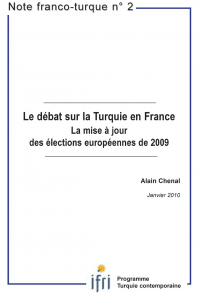 Updating the Debate on Turkey in France, on the 2009 European Elections' Time Note franco-turque, No. 4, January 2011

Turkey has become a recurrent issue in France's domestic political debate, following the referendum campaign on the European Consti­tutional Treaty in spring 2005. While the question of Turkish EU membership is itself a point of discussion, evoking Turkey also tou­ches on other sensitive... 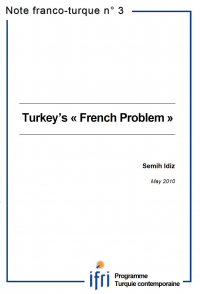 For several years the French-Turkish bilateral relationship is experiencing a phase of crisis and readjustments. 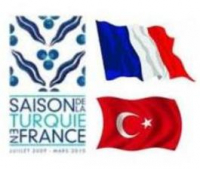