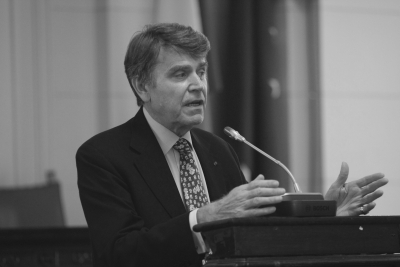 Founder and Executive Chairman of the Institute for International Relations

Member of the "Institut de France"

Thierry de Montbrial founded the French Institute of International Relations (Institut français des relations internationales, Ifri) in 1979. He has been its President since then.

In 2008, he launched the World Policy Conference. He is a former Professor at the Ecole Polytechnique since 1974 and chaired its Department of Economics between 1974 and 1992. He is Professor Emeritus at the Conservatoire National des Arts et Métiers. He was the Chairman of the French-Austrian Center for European Economic Convergence (1985-2015).

He serves on the International Advisory Board of Lafarge and chairs the International Advisory Board of OCP Group (Morocco). He is on the Board of Directors of Renault Foundation. He was a member of the Steering Committee of the Bilderberg Meetings (1976-2012). He was a member of the Consultative Board to the WTO Director-General, Geneva (2004-2005) and a committee member for the French White Paper on Defence and Security (1993-1994; 2007-2008).

He has been a columnist for Le Monde and for Le Figaro.

He is a Visiting Professor at the China Foreign Affairs University, Beijing.

Between 1993 and 2001, he was the first Chairman of the Foundation for Strategic Research (Fondation pour la Recherche Stratégique, FRS).

In 1973, he was entrusted with the creation of the Policy Planning Staff (Centre d'Analyse et de Prévision, CAP) at the French Ministry of Foreign Affairs. He was its Director from 1973 to 1979.

He was awarded the Grand Prix of the French Geographic Society in 2003.

He is a Commandeur of the Légion d’honneur, Grand Officier of the ordre national du Mérite and has been awarded other state honors by the French and several foreign governments (Austria, Belgium, Brazil, Germany, Japan, the Netherlands, Poland, Romania, Russia, Italy…).

Thierry de Montbrial is the author of many professional articles and of twenty books (several of them translated in various languages) in economics and international affairs, including Action and Reaction in the World System - The Dynamics of Economic and Political Power. UBC Press, Vancouver, Toronto, 2013. He has also contributed to various collective works.

Thierry de Montbrial was born on March 3, 1943. He is a graduate of the Ecole Polytechnique and the Ecole des Mines, and received a Ph.D. in Economics from the University of California, Berkeley.

For its 41st edition, RAMSES 2023. Europe at War, written by Ifri's research team and external experts, offers an in-depth and up-to-date analysis of geopolitics in today’s world.

The Direction of France’s Foreign Policy over the Next Thirty Years Politique étrangère, Vol. 86, No. 4, Winter 2021

A foreign policy points to a united society that manages its relationships with its surroundings while defending its own interests.

To adapt its foreign policy to new challenges, Germany must overcome certain taboos inherited from its history.

Europeans first grew aware of a possible pandemic exactly one year ago. The wave is here. It has submerged the world, claiming many lives and causing tremendous collateral damage.

Europe in the World: for a Modest and Effective Reform Éditoriaux de l'Ifri, December 16, 2020

This sad year ends with a pandemic that continues in full swing over a large part of the planet, especially in the United States and Europe, with no other reassuring prospect than that of one or more vaccines, which is already a lot. But that’s not the subject I want to focus on in this eighth...

The Biden-Harris Election: A Respite In View Of What? Éditoriaux de l'Ifri, November 9, 2020

I am writing this seventh letter on Sunday, November 8. Yesterday, the world press proclaimed the victory of Joe Biden and Kamala Harris. However, Donald Trump has filed lawsuits in several states, which few people believe have any chance of succeeding. At this point, then, the present...

The American Elections and Beyond Éditoriaux de l'Ifri, October 12, 2020

The next few years will be tumultuous ones in the United States. The dependency of foreign policy on domestic policy is unlikely to diminish. Whether in the rivalry with China or the predominance of Israeli interests in Middle East policy, for example, it is hard to imagine Biden taking a big...

RAMSES 2021. At the Edge?, written by Ifri's research team and external experts, offers an in-depth and up-to-date analysis of geopolitics in today’s world.

Looking back on the last few weeks, a famous quote by Goethe (from his report on the siege of Mainz in 1793) came to mind: “Better to commit an injustice than to countenance disorder.” In other words, disorder engenders more injustice than it eradicates. But, if one word...

By: Thierry de MONTBRIAL, guest in the tv show "Dialogue Weekend" on CGTV

This week the guest of "Dialogue Weekend" on CGTV is Thierry de Montbrial, founder and executive chairman of Ifri, French Institute for International Relations. Last Sunday, Emmanuel Macron became the first French president to be re-elected since Jacques Chirac 20 years ago, with a 17-point...

Letter from Europe: Disorder, Injustice and our Current Crisis

Looking back on the last few weeks, a famous quote by Goethe (from his report on the siege of Mainz in 1793) came to mind: “Better to commit an injustice than to countenance disorder.” In other words, disorder engenders more injustice than it eradicates.

What international order can be expected in a post-COVID-19 world ?

Thierry de Montbrial, Ifri's executive chairman, et Françoise Nicolas, director of Ifri's Center for Asian Studies, talked about the global order in a post-COVID-19 world at a videoconference on July 15th ahead of the World Knowledge Forum organized by Maeil Business Newspaper.<...>

Hubris, Black Swans and the Future of Europe

European Council meetings are seldom exciting. But last week’s virtual gathering showed once again that, despite fears, Europe is moving forward in the most serious crises.

“Populism is the great beneficiary of inefficiency. Without a virtuous response … authoritarian regimes will have free rein to thrive and rebuild walls — or wage war.”

media - Ifri in the Media
Health

How can global governance be fixed in an age of upheaval?

By: Thierry de MONTBRIAL, quoted by Jim Bittermann on CNN

Paris (CNN) - Nobody likes to hear that an old friend is "brain dead," so perhaps it's not surprising that France's allies seem to be going through the seven stages of grief over

The Changing Political Agenda and Role of Think Tanks in the Next Decade. Video

A debate in the framework of the 12th regional conference of Council of Councils (CoC) in Paris between Thierry de Montbrial, Executive Chairman of Ifri and Richard N. Haass, President of Council on Foreign...

Thierry de Montbrial, Executive Chairman of Ifri, is interviewed by Yang RUI for China Global Television Network (CGTN), on the sidelines of the Paris Peace Forum, November 2019. He analyzes the position of Europe in a world dominated by the Chinese-American competition.