Germany on the world stage

In 2017, the Cerfa published the collective work "Germany on the international stage - In search of stability in a changing world " edited by Barbara Kunz, Hans Stark and Stephan Martens.

In a changing world, Germany is more than ever seen as a factor of stability in the face of increasingly numerous and frequent crises. The longevity of its political staff, the power of its economic model and the appeal of its code of values and principles are certainly not unrelated. It embodies stability but can it also serve as a bulwark against the phenomenon of deconstruction of the multipolar order from 1945? The Islamist terrorist threat, the war in the Middle East, Russian expansionism, the unpredictability of the Trump administration, the rise of populism, the question of opening markets and the uncertainty about the future of the European Union constitute the various elements of a poly-crisis which undermines the foundations of German foreign policy. None of these challenges can be met alone or independently of others. Not to mention the dangers that lie ahead in the longer term. The crisis becomes the norm, the unforeseen becomes an inevitable challenge, the return of war and irruption of violence in our societies become trivial to the point of appearing as an everyday evil.

In the face of these challenges, what are the answers that the Merkel government brings and can Germany live up to the expectations?

This book was published in French. For more information (index), please visit our French website.

Secretary general of the Study Committee for Franco-German Relations (Cerfa)

In Germany, an important role is ascribed to development policy when considering the question of how to deal with the causes of displacement and irregular migration. Development policy seeks to enable (potential) migrants to enjoy brighter prospects in their countries of origin through job... 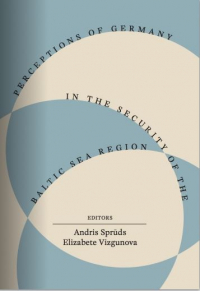 The Wider Context: Germany's Baltic Engagement, the ‘Munich Consensus’ and the Future of European Security In: Perceptions of Germany in the Security of the Baltic Sea Region, 2018/ Ed. By Andris Sprüds, Elizabete Vizgunova. – Riga: Latvian Institute of International Affairs, 2018

By: Barbara KUNZ
Due to its size and economic and political weight in Europe, Germany is an important actor in the Baltic Sea Region (BSR). Berlin has chosen to play an active role: the Bundeswehr’s presence in Lithuania as part of NATO’s Enhanced Forward Presence (eFP), but also proposals pertaining to...
Publications - External Publications - External Book Chapters
Germany (Cerfa) - Germany on the world stage - Europe 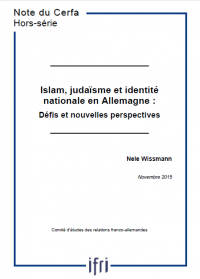 The present analysis links the debate on German national identity to on the one hand the revival of Judaism which was a deliberate political choice and on the other to the expansion of Islam which conversely was not anticipated. The article explains how Judaism was able to revive in Germany... 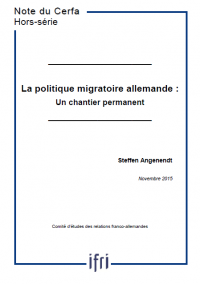 Although Germany is currently one of the main immigration countries, the Federal Republic has been slow to develop a long-term migration policy that comprehensively meets the diverse challenges that the country faces. Germany remains focused on short-term actions and is reacting to changes...