On 22 January 2019, French President Emmanuel Macron and German Chancellor Angela Merkel sign the Treaty of Aachen on “Franco-German Cooperation and Integration.” The document is set to complement the original Elysée Treaty from 1963, signed by President Charles de Gaulle and Chancellor Konrad Adenauer. 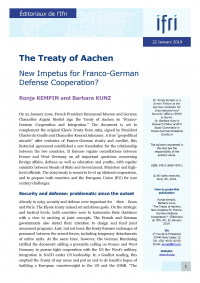 A true “geopolitical miracle” after centuries of Franco-German rivalry and conflict, this historical agreement established a new foundation for the relationship between the two countries. It foresaw regular consultations between France and West Germany on all important questions concerning foreign affairs, defense as well as education and youths, with regular summits between Heads of State and Government, Ministers and high-level officials. The 2019 treaty is meant to level up bilateral cooperation, and to prepare both countries and the European Union (EU) for 21st century challenges.

Security and defense: problematic since the outset

Already in 1963, security and defense were important for – then – Bonn and Paris. The Elysée treaty indeed set ambitious goals. On the strategic and tactical levels, both countries were to harmonize their doctrines with a view to arriving at joint concepts. The French and German governments also stated their intention to design and fund joint armament programs. Last, but not least, the treaty foresaw exchanges of personnel between the armed forces, including temporary detachments of entire units. At the same time, however, the German Bundestag ratified the document adding a preamble calling on France and West Germany to pursue tight cooperation with the US the West's military integration in NATO under US leadership. In a Gaullist reading, this emptied the Treaty of any sense and put an end to de Gaulle’s hopes of building a European counterweight to the US and the USSR. “The Germans”, he once said, “are behaving like pigs. They are putting themselves completely at the Americans’ service. They are betraying the spirit of the Franco-German Treaty. And they are betraying Europe.”[i]

De Gaulle’s anger is not the only reason why (high-flying rhetoric to the contrary notwithstanding) security and defense has always been the most difficult item on the bilateral agenda. To this day, very diverse historical legacies and strategic cultures, but also different security and defense priorities, prove to be high obstacles on the path toward closer bilateral cooperation. That France and Germany work together in this field is almost exclusively a result of the overall importance both countries ascribe to their bilateral relationship. Common interests and similar positions have much less to do with it. As a result, both Paris and Berlin have defense partnerships with other countries that go beyond Franco-German settings.

“Aachen” on security and defense – an agenda, no blueprint for action

Against that backdrop of rather complicated affairs, “Aachen” adds a number of new items to the Franco-German security and defense agenda, such as:

The new treaty does, however, not get much more concrete than that. It is consequently no blueprint for action, ready to be implemented. Rather, it identifies issues for cooperation, but the exact content and scope remain to be determined. The actual agenda thus remains to be defined. In that sense, the document may serve as a guideline for Franco-German relations in the coming decades. With the Aachen treaty, Paris and Berlin merely task the Franco-German Ministerial Council to adopt a multiannual work program after the text’s entering into force.

That said, there are of course issues that should be on the agenda. The key task at hand is to take Franco-German security to a strategic level. The nitty-gritty of joint armament projects or training is of course important. Yet, it cannot replace the dimension that continues to be missing in the bilateral relationship: the big picture, i.e. the strategic dimension. In order to fill the treaty with content and to define what France and Germany should do together, it is best to look at the questions Europeans – and thus also Paris and Berlin in a leadership role – will need to answer.

The first question pertains to the future of the transatlantic link: how can Europeans ensure the continent’s security if the United States were to reduce their engagement? This is not only about Trump. The rise of China will have considerable effects on the international system’s structure and likely engender the United States’ “Pacific Pivot,” this time for real. This does not necessarily imply a complete US withdrawal from European security affairs or the end of NATO. Yet, Europe will likely need to get used to play a more instrumental role in Washington’s policy, and to much higher US expectations when it comes to Europeans’ ability to ensure their own security. In order to be up to the task, what do Europeans need to do and what would be the role of the Franco-German tandem? This – ultimately – also includes the question of effective deterrence, including nuclear.

Second, and directly following from the above, what must be the level of ambition for European defense cooperation? This is the debate on European strategic autonomy, although the term may be misleading: strategic independence from the US is illusionary and not on the agenda anyway. But – in light of the expected more instrumental US take on transatlantic security cooperation –, the question is what the Europeans can contribute to that relationship, thereby in fact strengthening the transatlantic security link. As the two post-Brexit heavyweights in the EU, France and Germany must play a key role in this debate. Finding answers to these questions is of utmost importance. Likewise, it is crucial that Europeans – and again France and Germany in particular due to their role as an engine for European integration – take a more strategic approach to a number of other challenges. These include their relations with Russia and China.

To start with, Paris and Berlin could launch a Franco-German White Paper process under the auspices of the Franco-German Defense and Security Council. This document should contain a shared analysis of the current security environment and the risks and threats it presents. From this analysis, regional and functional priorities should be derived; based on these priorities, a joint level of ambition has to be defined. A next step could then be an EU White Paper. Starting such a process could be a flagship project for the 2/2020 German EU presidency. In any case, all the rest – cooperation formats, projects, operations – should follow from such a strategic take.

In times of a steadily deteriorating security environment and a changing transatlantic relationship, the security policy recipes of the 1990s and 2000s require an urgent update. This must of course also apply to long-standing examples of Franco-German defense cooperation such as the Franco-German Brigade. The treaty thus rightly calls for the reexamination of existing formats and instruments of cooperation. With the creation of Airbus and the Franco-German Brigade, Paris and Berlin were precursors on common procurement and the integration of armed forces. Today, standardization of rules and procedures and the harmonization of military needs must be lifted to the next level. Agreeing on the full standardization of materiel, administrative processes and legal frameworks for the Brigade would be a big step in the right direction.

Finally, it is equally important to not let more down-to-earth issues poison the relationship and get in the way of these big picture matters. For example, armament exports, in particular of jointly developed and built materiel, continues to be an enormous stumbling block in Franco-German affairs. The new treaty certainly says both countries will develop a “joint approach” to the matter – but they are not there yet. The Franco-German Defence and Security Council would be well advised to examine two options: a governmental agreement on export control criteria or a country list of admissible customers; or the setting up of a common authority that would decide on export applications.

As it stands, the implementation of the Aachen treaty is in the hands of the executive powers. The pressure for them to actually do so must, however, come from the outside – in particular from the Bundestag and the Assemblée nationale, but also from civil society. Both parliaments are about to set up a common parliamentary chamber. Its task will be to regularly ask the executive to report on the implementation of the treaties. The announced upgrade of the Franco-German Defense and Security Council should be taken seriously. This could in particular include adding a track 1.5 dimension to it, which can be particularly helpful in terms of strategic foresight and big picture analyses as outlined above.

In sum, whether this new treaty will qualify as a big leap forward in Franco-German (defense) cooperation still remains to be seen. Treaties cannot replace political will. The current state of Franco-German defense cooperation seems to be the optimum possible in light of deep, structural differences in French and German strategic cultures and priorities. The truth is that cooperating with the neighbor is not included in these priorities, neither for France nor for Germany, as they simply do not match. The Aachen treaty is unlikely to change this. Going beyond what is currently done will consequently be utterly difficult. The Aachen treaty provides a good basis for doing so. It is now up to Paris and Berlin to fill it with life.