America Is More Than Trump. Europe Should Defend the Iran Deal without Burning Bridges to the US Éditoriaux de l'Ifri, May 2018

US President Donald Trump’s decision to withdraw from the 2015 Iran nuclear deal, known as the Joint Comprehensive Plan of Action (JCPOA), will severely degrade regional and global security. His decision has increased the risk of war and a nuclear arms race in the Middle East and beyond. 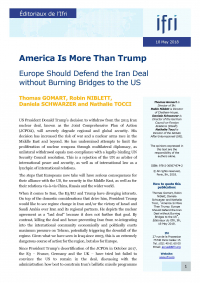 America Is More Than Trump. Europe Should Defend the Iran Deal without Burning Bridges to the US Download
0.46 Mo

He has undermined attempts to limit the proliferation of nuclear weapons through multilateral diplomacy, as unilateral withdrawal equals non-compliance with a legally-binding UN Security Council resolution. This is a rejection of the UN as arbiter of international peace and security, as well as of international law as a lynchpin of international relations.

The steps that Europeans now take will have serious consequences for their alliance with the US, for security in the Middle East, as well as for their relations vis-à-vis China, Russia and the wider world.

When it comes to Iran, the E3/EU and Trump have diverging interests. On top of the domestic considerations that drive him, President Trump would like to see regime change in Iran and/or the victory of Israel and Saudi Arabia over Iran and its regional partners. He depicts the nuclear agreement as a “bad deal” because it does not further that goal. By contrast, killing the deal and hence preventing Iran from re-integrating into the international community economically and politically exerts maximum pressure on Tehran, potentially triggering the downfall of the regime. Given what we have seen in Iraq since 2003, this is an extremely dangerous course of action for the region, but also for Europe.

Since President Trump’s decertification of the JCPOA in October 2017, the E3 – France, Germany and the UK – have tried but failed to convince the US to remain in the deal, discussing with the administration how best to constrain Iran’s ballistic missile programme and regional role. Yet, trying to mollify Trump has been a lost cause: not only because of the President’s views, but also because any deal with Iran entails conferring a degree of US acceptance and legitimacy toward the Islamic Republic, which is anathema to many in America, as well as the Iran hawks now solidly at the helm of the Trump administration.

In contrast, Europeans have a strategic interest in defending the Iran nuclear deal, given its role as a key plank against the risk of further nuclear proliferation in the Middle East. Both Europeans and Americans have a strategic interest to fight nuclear proliferation, but the role of the JCPOA in achieving this goal is interpreted very differently. The question is how the E3/EU now use this moment to apply leverage towards their own strategic objectives.

Ironically, we are back at 2003, where the US invasion of Iraq provided the E3/EU with the opportunity to negotiate with the Iranian government to halt what was then its clandestine nuclear programme. Europeans now need to use Trump’s unilateral withdrawal from the JCPOA to try to achieve what are genuine transatlantic as well as European goals: a containment of Iran’s ballistic missile programme, a de-escalation of its political-military engagements in Syria, Lebanon and Yemen, and security for Israel. Unlike the Trump administration, in the broader regional conflagration of the Middle East, European governments and institutions see no possibility for one side winning squarely over the other. Instead, most believe that the seeds of a cooperative regional order lie in a balance of power in the region in which no regional player is excluded. Only by achieving this sort of a regional balance can Europeans also hope to tackle their own core security interest, which lies in the defeat of jihadi terrorism, ISIS first and foremost, but also a containment of the regional arms race.

This will require the E3/EU working with the remaining United Nations Security Council (UNSC) members and with Iran to keep the JCPOA alive, as announced in the meeting with Iranian Foreign Minister Zarif earlier this week. In practice, this means the E3/UE taking specific steps to help protect European commercial investments in and trade with Iran, even if some major European multinationals choose to or are forced to withdraw. It also means resisting US pressure to close Iran off from the SWIFT financial transfer system and other such extra-territorial steps. The Trump administration may object, but these steps cannot be construed as helping Iran’s quest for nuclear weapons, which President Trump has said would lead to US retaliation. And, while remaining faithful to the JCPOA, Europeans can still step up their challenge to Iran’s increasingly problematic role in the region.

Europe and the US have traversed through rough moments before. When the E3/EU first engaged the Iranians in talks over their nuclear programme in 2003, the George W. Bush administration was adamantly opposed. In time, the incontrovertible reality of Iran’s advancing nuclear enrichment programme forced upon the US the need to find a diplomatic solution. Precisely because America is more than Trump, it is crucial for Europeans to defend the JCPOA, thereby preserving this diplomatic structure in the event that the United States decide to return to the path of multilateral diplomacy vis-à- vis Iran.

If Europe has the ambition to become strategically autonomous, fighting for the JCPOA is the place to start. The EU will only be able to negotiate effectively with the US over Iran if it develops its own strategy, and demonstrates its ability to act based on its own interests.

France vs. Turkey in the EastMed: A Geopolitical Rivalry...

What is left and to whom? Germany’s left-wing party Die...

Tatiana KASTOUEVA-JEAN
European security: from words to deeds - lessons from the Franco-Danish partnership...