In September and October 2020, the Sinophone Borderlands project at Palacký University Olomouc conducted a wide-scale survey of public opinion on China in 13 European countries. The polled countries include: Czechia, France, Germany, Hungary, Italy, Latvia, Poland, Russia, Serbia, Slovakia, Spain, Sweden, and the United Kingdom. Here, we present the basic findings of the survey, which are a result of a joint analysis of the survey data by the Central European Institute of Asian Studies (CEIAS) and Sinophone Borderlands. 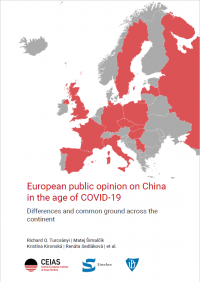 Overall, views of China in the surveyed countries are predominantly negative, with respondents in 10 out of 13 countries reporting significantly more negative than positive views. Populations in Western and Northern Europe tend to have the most negative views, Eastern Europe holds positive views, and Southern and Central Europe find themselves in between, while still being predominantly negative.

When looking at various aspects of interactions, only trade with China is perceived predominantly positive in most countries - exceptions being France, the UK, and Sweden who lean slightly negative. In comparison, Chinese investments are perceived somewhat more negatively, with only a minority of countries leaning to the positive - such as Serbia, Russia, Latvia, and Poland. Chinese investments are the most negatively perceived by respondents in Sweden, France, and Germany. Similarly, the Belt and Road Initiative is perceived somewhat positively in Serbia, Russia, Latvia, Italy, and Poland, while the remaining countries lean towards negative perceptions.

The most negatively perceived issues are China’s impact on the global environment and China’s effect on democracy in other countries, where respondents in all thirteen countries have decisively negative perceptions.

This suggests that even in countries where there is a generally positive attitude towards China, there is a recognition of the downsides. Moreover, it emphasizes that even after four years of the Trump administration during which China attempted to present itself as a responsible power in terms of global environment protection, European respondents still did not recognize it as such. Overall, China’s soft power in Europe still seems to be very limited - and the limitations appear even more visible when scratching beneath the surface.

In the remaining 11 countries, the EU is trusted the most, far ahead of the U.S., with Russia, and China last. There are only slight variations in this picture, such as the UK where the trust to the U.S. comes close to the EU, reflecting their traditional transatlantic directions and also skepticism among parts of the population towards the EU. Other countries where there is relatively high trust in the U.S. are Hungary, Poland, and Italy. In Slovakia and Latvia, the trust of the EU is high (Latvia has the highest trust towards the EU from among all the countries), while the trust of the U.S. is lower than that of Russia.

The specific issue of 5G networks reflects these policy preferences, as respondents show preferences for cooperating with companies of some countries while rejecting others. In most countries, respondents decisively favor cooperation with companies from the EU, followed by those from Japan and the U.S. Perhaps interestingly, fewest respondents wanted to cooperate with South Korea, including in Italy, Spain, Hungary, or Poland. Chinese companies belong among the least favored to cooperate with on the construction of the 5G networks, especially in Sweden, the Czech Republic, the UK, France, and Germany.

The full report with charts is available to download below, as well as on the CEIAS website.

European public opinion on China in the age of COVID-19: Differences and common ground across the continent
Download
2.33 Mo
Keywords
COVID-19 Public Opinion China Europe
ISBN / ISSN:
978-80-244-5804-5
Print this article
Back to top