As China’s rise continues to shape and shake the course of international affairs, and Europe enters a new chapter in its collective history, Europe-China relations are becoming more relevant, but also much more complex. 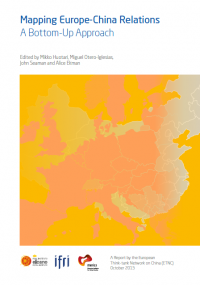 Understanding these complexities requires a precise examination of the various state-level bilateral relationships and interests at play between China and the EU countries. From such a bottom-up perspective, this report makes a number of observations:

For all EU member states, interdependence in economic relations with China has increased and political relations have gained in maturity and depth. High-level exchanges between European capitals and Beijing are much more frequent.

The context of EU-China relations has dramatically changed over the past five years. China’s interest in Europe is expanding into new areas, both geographically (Central, Eastern and Southern Europe) and in substance (for instance with increasing Chinese investment in Europe). Europe is encountering a much more proactive China on the diplomatic front and the contours of the relationship are increasingly designed in Beijing. Asymmetries in EU member states’ relations have turned increasingly to Beijing’s favour. European governments find their relative influence over Beijing waning. This is exacerbated by their lack of communication, cohesion and, consequently, their inability to formulate common policies.

Indeed, in dealing with China, Europe is divided and competes with itself. This competition, or at the very least lack of coordination on China policies, stems more from deficiencies within Europe than from a deliberate Chinese strategy to divide the continent. With growing competition for Chinese investments, for instance, China is presented with 28 ‘gateways to Europe’. In return, China has been keen to re-package this argument and highlight the special nature of its relationship with individual European partners.

While some common patterns exist, new trends in investment and trade relations with China are highly differentiated across Europe. This fundamentally complicates a joint European response vis-à-vis China with regard to pressing issues such as granting China Market Economy status and with regard to ongoing or upcoming negotiations of trade and investment agreements.

China is following its own distinct and flexible foreign policy approach when dealing with Europe. It constantly assesses new developments in European markets, adjusts to changes in the domestic and regional context as much as possible and looks to seize opportunities whenever they emerge. Europe is important for China as an economic partner, but the Europeans – the EU and its individual member states – are also key players in China’s broader global strategic initiatives, such as the ‘One Belt, One Road’ (OBOR) project, the reconfiguration of multilateral and international institutions (as witnessed with the creation of the Asian Infrastructure and Investment Bank – AIIB), and the emergence of a more multipolar global order.

Despite some modest efforts to develop genuine strategic dialogues, most, if not all European national strategies towards China are dominated by the logic of economics. The state of the European economy has caused many to look to China in recent years as a potential source of growth, or a diversification of economic interests that are intricately tied to the rest of Europe and, for many countries in Central and Eastern Europe (CEE) in particular, uncomfortably tied to Russia. In this context, many European states are continuing to make hard choices between political ideals, such as the promotion of democracy and human rights in China, and their economic strategy. While for many these political ideals remain in place, their prominence in the bilateral relations with Beijing has weakened, and actions taken by individual states on this front have rarely been met with support from other EU partners.

This is a preliminary report following the inaugural meetings of the European Think-tank Network on China (ETNC), a network co-founded by Ifri and the Elcano Royal Institute in November 2014, and coordinated in conjuction with the Mercator Institute for China Studies (MERICS) and 12 other policy research institutes across Europe. While the report is a first step toward understanding the dynamics and multilayered complexity of EU-China relations, it is still premature for ETNC – as a new expert network – to provide policy recommendations on how to better coordinate the EU’s foreign policy towards China. Following a bottom-up approach, the authors strongly believe that more cohesive European policies can only be designed once the individual bilateral relations are properly understood. This first report therefore provides an initial, detailed mapping of some of these relations. Ideally, this exercise will be repeated on a regular basis and expanded to comparative analyses of specific developments and concrete policy items in EU-China relations.

Chapters of the report

4. France and China: A not so ‘special’ relationship
Alice Ekman and John Seaman

6. Greece and China: Discovering each other at last?
Plamen Tonchev

8. Italy and China: Investing in each other
Nicola Casarini and Marco Sanfilippo

China's Ambitions in Space: The Sky's the Limit