Action and Reaction in the World System UBC Press, Canada, 2013 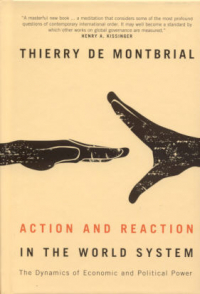 The book occupies the same niche as Raymond Aron"s 1962 classic, Peace and War: A Theory of International Relations. While Aron wrote during the Cold War, Thierry de Montbrial writes about the post-Soviet international system, a system that is multipolar, ideologically heterogeneous, and therefore highly unstable.

In this book, de Montbrial lays the foundation for a praxeology, or a "science of action," to facilitate a better understanding of the dynamics of international problems and a more systematic approach to policy making. A key concept is the "active unit," essentially any human group that is comprised of both a common culture and an organizational structure (e.g., state, corporation, NGO, or religious entity). He develops a model to analyze different types of international problems that arise from interactions between different units; he then applies this model to a range of current and historical problems.

A major contribution to international relations theory, which was awarded the 2002 Georges Pompidou Prize in its original French edition, this book offers the necessary keys to decrypt the international system in the twenty-first century.

"A masterful new book ... a meditation that considers some of the most profound questions of contemporary international order. It may well become a standard by which other works on global governance are measured."
HENRY A. KISSINGER

"This is a serious and ambitious work. Thierry de Montbrial ranges over a host of scholarly disciplines to offer an intriguing synthesis about 'global governance.' De Montbrial explains the dynamic of sovereign states facing the new realities of globalization -- through both theory and practice."
ROBERT B. ZOELLICK, former President of the World Bank Group, US Trade Representative, and US Deputy Secretary of State

"De Montbrial is not afraid to challenge his readers to think in an impressively holistic way, truly following in the footsteps of Raymond Aron. At the same time he convincingly connects theory to current events in the world."
GORDON SMITH, Distinguished Fellow at the Centre for International Governance Innovation and former Canadian Deputy Foreign Minister

"An outstanding and timeless book that will serve as an invaluable reference for scholars, a helpful companion for practitioners, and a precious education tool for students. Thierry de Montbrial's ability to merge disciplines, transcend time, and bridge space is impressive."
SIMON SERFATY, Zbignew Brzezinski Chair (Emeritus) in Global Security & Geostrategy, Center for Strategic & International Studies, and Professor of International Politics, Old Dominion University

Preface to the English Edition

Part One: Theory
1 Active Units and Praxeological Problems: An Introduction
2 Potency
3 Conflicts and Their Resolution
4 The Concept of Strategy
5 The Stability of Systems of Active Units
6 International Relations Theory
7 The Object and Nature of Economics