Despite a landmark agreement on climate in December 2015, reducing the share of coal in the world energy mix will remain extremely difficult. This paper analyses five large consumers choices in terms of coal and clean coal technologies. 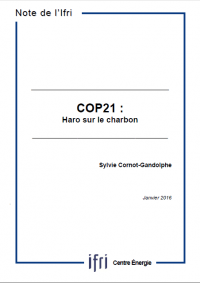 On December 12, 2015, world leaders approved a historic agreement to limit global warming to below 2 °C above pre-industrial levels and have set a 1.5 °C target for the long term. The days of coal, the most emitting fossil fuel, could be counted. If the Paris Agreement does not explicitly condemn its use, the pressure against coal is strengthening. But replacing coal by non- or low-carbon energy sources is not easy. World coal consumption increased by over 70% since 2000. Currently, coal accounts for 41% of global electricity generation. Although the climate issue is urgent, coal consumption cannot be replaced overnight.

Five major coal consumers (China, USA, India, EU, and Japan) account for 82% of current world coal demand. The possibility of substituting coal with other energy sources (natural gas, renewables, nuclear), produced domestically to secure electricity supply, differs from one country to another. China, which accounts for half of global coal demand, has announced a reduction of its dependence on coal. The main aim is to fight emissions of local pollutants that poison the big Chinese cities. If this reduction marks a fundamental change, it should be noted, however, that Chinese coal demand is expected to reach a plateau and not decline rapidly. In the US, the shale gas revolution facilitates the replacement of coal with natural gas. However, the implementation of the Clean Power Plan is essential to reach the CO2 emissions reduction target announced by the government. In India, where a quarter of the population has no access to electricity, despite the massive development of renewable energy, coal demand is expected to grow significantly due to the economic and social development of the country. In Europe, where coal consumption has been declining for two years after a brief "renaissance", policies differ from one country to another. The United Kingdom has announced the closure of its coal thermal power plants by 2025; Poland relies on coal to sustain its economic development and ensure its energy independence; and Germany foresees a gradual decline of its coal fleet, which still provides almost half of electricity production. In Japan, coal is considered as a source of diversification, essential to its security of supply. Japan also supports the export of high-efficiency coal power plants. Its financing projects extend to almost all ASEAN countries. Japan defends its policy by stating that the use of the technologies developed in the country would allow a significant reduction in global CO2 emissions. A position that led to relaxing the agreement reached in November 2015 between OECD countries, which provides an end to the financing of coal power plants, except for the most advanced technologies (ultra-supercritical).

Thus, it is illusory to think that coal will rapidly disappear from the global electricity mix. Even in the 450 Scenario of the IEA, in 2040, coal provides 30% of the energy balance of non-OECD Asian countries. Improving the efficiency of power plants and deploying CO2 capture and storage (CCS) technologies at large scale are the only way that could reconcile the continued use of coal and the reduction in CO2 emissions required by the Paris Agreement. This conclusion is similar to that of the IPCC, which states that CCS is crucial for containing global warming below 2 °C, alongside with a massive deployment of other solutions to decarbonise the electricity system.