Skip to main content
You are here
Home > Turkey

Turkey today evolves very fast, due to the joint influence of external factors and internal dynamics that are sometimes difficult to grasp.

The beginning of negotiations to adhere to the European Union allowed the Turkish government to pursue a series of political reforms in order to conform to the criteria demanded by Copenhagen. After many years of severe structural adjustment the Turkish economy benefits from outstanding growth rates that confirm its status as a promising emerging market. Turkish civil society also seems to acquire and strengthen an autonomous voice in the debates to come.

However, there are many uncertainties that are here to stay. As this process of change is still unfinished, the permanent state of political crisis comes at the expense of economic stability. Institutional models and political culture are undergoing a phase of mutations whose outcomes are difficult to predict. Experiencing a rural exodus and new forms of social mobility, the Turkish population is aware of the important consequences these profound changes have on the social contract and national consensus. On a diplomatic level, Turkey is oscillating between the ardent European demands, exercises of power that may lead to a loss in sovereignty, and the other tempting alliances that could strengthen its status as a regional power that cannot be ignored.

Far from simplifying the Turkish mosaic, the intensification of its relations with the European Union seems to complicate it: new subject positions emerge that emphasize the need to create new tools of understanding. We must look at contemporary Turkish reality with a new eye in order to spot these new actors, factors of mobilization and lines of cleavage that weigh on Turkey’s choices.

After a Divorce, a Frosty Entente: Turkey's Rapprochement with the United Arab Emirates and Saudi Arabia Notes de l'Ifri, May 2022

After the Arab uprisings, Turkey’s relations with Saudi Arabia and the United Arab Emirates (UAE) broke down along sharp ideological lines. While Riyadh and Abu Dhabi sought to preserve the regional status quo by adopting a counter-revolutionary approach, Turkey emerged as an anti status quo,...

The French Military's Perception of the Turkish Military and Turkey's Expansion in the Eastern Mediterranean Etudes de l'Ifri, November 2021

In the summer of 2020, the Central and Eastern Mediterranean became the center of unusual tensions between France and Turkey. Given that these tensions were also military, which is uncommon for the two countries, the perception that the French military has of Turkey’s army and its doctrine is...

Since coming into office in 2017, Emmanuel Macron has been the loudest advocate for the development of European ‘strategic autonomy’, which aims at reinforcing the European Union’s geo-strategic independence. Asserting the EU’s role on the international stage, starting with its immediate...

Conflicts in the EastMed: From Germany’s and France’s Conflicting Strategies to a Dual Approach Briefings de l'Ifri, September 3, 2021

By: Laura Lale KABIS-KECHRID
Over the past years, the Eastern Mediterranean has become centerstage of an increasingly internationalized and militarized conflict driven by different albeit interlinked issues and an arena for a growing variety of actors to project their geopolitical ambitions.
Publications - Briefings de l'Ifri
Turkey - French-Turkish Dialogue - The Turkey Observatory

On July 20, 2021, Turkish President Recep Tayyip Erdoğan celebrated with his Turkish Cypriot counterpart Ersin Tatar the 47th anniversary of the Turkish military intervention in Northern Cyprus. This ceremony marks the strategic reinvestment of the Cypriot file by Turkey.

Back to “the Tradition”: Turkey’s Changing Position from a Federal to a Two-State Solution to the Cyprus Conflict Notes de l'Ifri, July 2021

When it came to power in 2002, the Justice and Development Party (AKP) defended a bicommunal, federal solution for Cyprus, and supported the Annan Plan to reunite the island.

France vs. Turkey in the EastMed: A Geopolitical Rivalry between a “Keeper” of the Old Order and a Challenging Emergent Power Briefings de l'Ifri, May 2021

The Franco-Turkish standoff is first and foremost a geopolitical contest for influence in the EastMed area. It must be understood in light of Turkey’s rise as an emergent power in quest for geostrategic autonomy and France’s unease with Ankara’s growing assertiveness in a region that Paris...

Mavi Vatan, the "Blue Homeland": the Origins, Influences and Limits of an Ambitious Doctrine for Turkey Etudes de l'Ifri, april 2021

Turkey’s activism in the Eastern Mediterranean now appears to be guided by an ambitious legal and geopolitical doctrine, based on the claim of a vast maritime domain – the “Blue Homeland” or Mavi Vatan in Turkish.

Turkey: An Emerging Power without the Resources to Match Its Ambitions Politique étrangère, Vol. 85, No. 4, Winter 2020-2021

Turkey is adopting an increasingly hostile stance towards Western countries. Its activities in the eastern Mediterranean and in Libya demonstrate this.

Is Escalation Between France and Turkey in the Middle East and Beyond Inescapable? Geneva Center for Security Policy, Syria Transition Challenges Project, November 2020

In recent years, France and Turkey have been on opposing sides relating to Middle East concerns.

Since 2014, the number of maritime incidents between Turkey and its Greek and Cypriot neighbors has steadily increased. In 2020, at the height of the crisis, Greece obtained the unconditional support of French President Emmanuel Macron, who sought to portray himself as the defender of European...

Since 1983, the QUAD gathers every year, the SWP, RAND Corporation, Chatham House and Ifri. The QUAD was set up during the Euromissile crisis and brings together European and American diplomats, military officers, journalists and research fellow to debate on current geopolitical issues.<...>

What is Turkey seeking in the Middle-East? Videoconférence

In the first of our foreign policy meeting series “Ruptures in the Neighborhood: The Impact of Turkish Foreign Policy in its Neighboring Countries and Beyond,” we will focus on the Turkish foreign policy (TFP) in the Balkans. In line with the overall goal of the series, we will aim to get an...

Turkey advancing in the Middle East Seminar and Round-table Conference

The Syrian imbroglio has arguably proved to be the most consequential foreign policy topics for Turkey in decades, structurally impacting Ankara's vision and priorities as well as its regional engagement.

Since the collapse of the Ottoman Empire in the aftermath of the World War I, efforts by both regional or international powers to build a sustainable regional order in the Middle East have failed. While some debate on the best conceivable order for the region, others argue that we should...

Since the nuclear agreement was reached in July 2015, Iran has returned to the forefront of international relations. However, the complexity of Iranian society remains hardly understandable for Western observers. At a time when both Iran and the world are opening to each other, in order to...

Being both the country of refuge and of transit, Recep Tayyip Erdogan’s Turkey plays a key-role in the Syrian refugee crisis. The agreement between Brussels and Ankara to manage the flow of migrants, signed with German approval, caused much debate. It also pushed the question of Turkey’s...

Is Turkey a reliable partner for Europe?

Registrations are now closed for this event.

By: Dorothée SCHMID, interviewed by Julia Kim for "Middle East Matters" on France24.

The leaders of Saudi Arabia and Turkey are turning the page on years of strained relations, exacerbated by the 2018 assassination of Saudi journalist Jamal Khashoggi at the kingdom's consulate in Istanbul. Face-to-face dialogue is the order of the day between Crown Prince Mohammed bin Salman...

2021, year of the revival of EU-Turkey relations?

By: Dorothée SCHMID, interviewed by Camille Cerise Gessant for Euranet Plus News Agency

The EU and Turkey both say they are ready to iron out their differences and step up bilateral cooperation, which could take place in many areas. But Ankara will have to prove its goodwill.

By: Dorothée SCHMID, quoted by Laura Pitel in Ankara and David Sheppard in London in Financial Times

Competing claims have left Ankara isolated. Its efforts to stall projects threaten billions of dollars in investment. Europe’s top diplomat smiled for the camera as he took a helicopter flight over the disputed waters of the island of Cyprus at the end of June.

Turkey has decided to suspend the opening of several French studies departments in its universities, in a context of bilateral tensions after the publication of a "manifesto against new anti-Semitism" last month, calling for the correction of some parts of the Quran. Dorothée Schmid, head of... 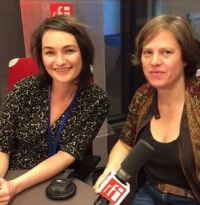 By: Dorothée SCHMID, interviewed by Amanda Morrow on RFI

Turkey is looking to revive a fragile ceasefire in Aleppo, and the planned evacuation of civilians, which brokered with Russia. But why is Ankara, a staunch opponent of Damascus, interested in helping to create an outcome that would benefit President Assad? Amanda Morrow put the question to...

Coalition or snap poll: What next for Turkey?

By: Dorothée SCHMID,  on France24, article by Amara MAKHOUL

Turkish President Recep Tayyip Erdogan’s AKP suffered a stunning defeat in the latest parliamentary poll with the party losing its absolute majority for the first time in 13 years. The question now is whether it can hold on to power.

Conference with Recep Tayyip Erdogan, President of the Republic of Turkey

...
Turkey
Print this thematic
Back to top