The Chinese gas market is facing four key challenges and the government is elaborating responses which will have implications for the Chinese and world energy markets: 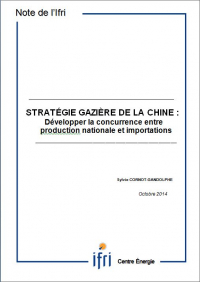 - Enabling the development of gas demand in order to fight against the issue of air pollution which is particularly strong in the big coast cities of the East and South-East of the country. This means replacing coal and oil by cleaner energy sources, including natural gas for which demand is booming. In such a young market, everything needs to be put in place: from the construction of LNG terminals to the sale and installation of gas stoves. The price of gas needs to be competitive for the market to develop.

- Securing supplies: As national production is struggling to follow the rise in demand and as shale gas – of which China owns the second largest reserves in the world – is still a distant dream, this country is more and more reliant on imports. For evident energy security reasons, China diversifies its supplies at the maximum level and develops new energy partnerships. Four importing routes are favoured: LNG transported by ships, the West axis with Central Asia, the South axis with Burma and the new North-East axis with Russia. These imports, which amounted to 53 bcm in 2013, may triple by 2020. Even though China managed to negotiate a favourable price with Russia and its LNG importing price is lower than the one of Japan – thanks to its first LNG importing contracts signed in the early 2000 – imports are expensive, in particular for a country used to producing or importing coal at a very low cost. Up to now, the price at which gas is sold could not cover the import price and this system is not sustainable.

- Developing national production: Despite important gas reserves – in particular for unconventional gas (shale gas, tight gas, CBM) – production in China is still not much developed in comparison with its potential and the growth opportunities are significant. Making the best of this potential requires massive investments in the upstream and a regulatory framework which is giving the proper incentives for investments. The recent opening of the upstream sector to private and foreign companies (shale gas, CBM, offshore, tight gas), the announcements about opening third-party access to the grid and the price reform should stimulate investments in the upstream and national production.

- Reforming gas prices: As imports grow year on year – China’s dependency on foreign supplies reached 32% in the first semester 2014 – the financial losses for importers account for tens of billions of dollars. Likewise, up to now, the level of prices was not sufficient to stimulate the offer of unconventional gas. The increase in retail gas prices is therefore the only solution.   The reform of gas prices, launched in July 2013, links city gate prices to the prices on the market of oil products (fuel oil, LPG), which are competing with gas in the residential, commercial and industrial sectors as well as in the transportation sector. It leaves aside the tricky issue of the power sector, for which demand is mainly based on coal, a polluting energy source, but an abundant and national one.

The reform should boost investments in the upstream and wipe out the financial losses linked to gas imports. Through the indexation on oil products, it links the gas consumption prices (excluding the residential sector) to the gas import prices. Consumers will become more sensitive to gas import price trends. The ability to pay higher prices will therefore be the decisive factor for the future level of demand and its regional development. In the short run, China faces this issue of the consumers’ ability to pay their energy at a higher price. Political leaders need to strike the right balance between an affordable offer of natural gas stimulating market penetration and a price that is sufficiently high to promote national production and imports to cover the potential rise in demand. By moving the reference price from upstream to downstream (from wellhead price to city gate price determined by prices on markets of competing energies), the government tries to implement a system in which the market will determine the level of upstream investments in China and the volume of imports. In the end, this system will lead to an optimal allocation of supply sources, being extracted from its underground or imported, at a price determined by gas demand and offer dynamics. Given the current and future weight of China in international gas trade, this equilibrium on the Chinese market could determine the international gas price, as it occurred on the coal market in less than three years. China became a net coal importer in 2009 (although it is still the biggest producer worldwide), surpassed Japan as first world importer in 2011 and since then Chinese prices have become the international reference for steam coal prices sold on the world markets.

Bringing forward the price reform, as announced by President Xi Jinping at the 18th Congress of the Communist Party in October 2013, will not be easy because it implies not only an increase in gas prices but also an increase in coal prices (through a tax on resources or a carbon tax or the introduction of a national emission trading scheme) and in electricity prices. These reforms would make gas more competitive in the power sector, but would lead to an overall increase of energy prices in China. It is a difficult and brave political decision. More broadly, China can count on the downward trend in international gas prices and on its unique position: China is the biggest importing gas market, it is expected to grow further and it is able to weigh significantly on the price of future imports at a time when the world LNG market is becoming less tight. In the long run, shale gas production in China could reshuffle the cards but, given the current status of knowledge, it is too soon to evaluate its future contribution and price.

Europe in the Face of US-China Rivalry
END_OF_DOCUMENT_TOKEN_TO_BE_REPLACED
Spain, the Green Deal and the energy transition Closed door energy breakfast...