How can we define Emmanuel Macron’s foreign policy since he took office? After Nicolas Sarkozy’s brazen style of “gutsy diplomacy” and François Hollande’s “normal diplomacy”, the eighth president of the Fifth Republic seems to have opted for an agile classicism. In substance, he makes no claim to any radical break with the past, but sees his approach as being in line with historical tradition. 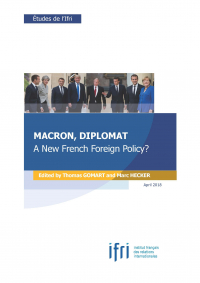 In relation to his predecessors, he has adjusted the balance between alliances, values, and interests in favor of the latter, while giving his policies an unambiguous European orientation. Formally, his approach is characterized by recourse to symbolism, strict control of communications, and an agile personal style. A term used within the business world to encourage organizations and individuals to adapt and innovate, “agility” also connotes a will to utilize and master new technologies. [...]

Comprising 14 brief analyses, this collective study contributes to the initiative launched by Ifri in 2016 to analyze French foreign policy, and follows on directly from the earlier study published on the eve of the presidential election. It aims to give an update on the action Emmanuel Macron has taken on the principal international issues since his arrival in office. It should therefore be read not as an overall assessment, which would be impossible at this early stage of the presidential term, but more as an impressionist tableau giving a sense of an overall movement containing many different hues. Emmanuel Macron has four years left to perfect it.

This report is also available in French: "Macron, an I. Quelle politique étrangère ?"

The Economic Attractiveness of France: A Long-Term Project, Julien Marcilly

In 2017, the outlook for the French economy brightened: for the first time since 2011, GDP growth reached 2%, the unemployment curve has finally turned around, and the number of corporate insolvencies has decreased by 8%. On closer inspection, however, the picture is far from idyllic: France’s trade deficit has grown by 25% over the past two years, to the point where it shaves 0.6 points per year off French growth.

Like most of the candidates in the presidential election, during the electoral campaign Emmanuel Macron championed great ambitions for French defense. Following a period characterized by operational overload in response to an increasing number of threats, almost all the candidates shared the diagnosis that a budget increase was necessary.

Emmanuel Macron’s victory speech, given in front of the Louvre pyramid on May 7, 2017, was perceived by many commentators in terms of monarchical symbolism. But counterterrorism specialists read it as a symbol of resilience. Three months earlier, a terrorist had attacked soldiers patrolling, as part of Opération Sentinelle, beneath this very pyramid. The electoral campaign was then marked by another attack: the assassination of a policeman on the Champs-Élysées three days before the first round of voting. But this tense situation could not put off a huge crowd from coming to celebrate the victory of the En Marche candidate.

The climate emergency is real, with a trend of record high temperatures over the last few years and a further increase in greenhouse gas emissions in 2017. President Macron has taken the situation on board in full, preaching to his guests at the One Planet Summit in Paris in December 2017: the world is losing the battle against climate change, and we must move faster and include climate constraints as a factor in every decision we make.

Curiously enough, the presence of a Front National candidate in the second round of voting in the 2017 presidential election did not lead to immigration becoming a central question for French voters. This is all the more striking when we compare the situation in France with the elections that have recently taken place in the Netherlands, Germany, Austria, and Italy. Emmanuel Macron was not elected on this issue, then. Nevertheless, the beginning of his term in office was strongly marked by the asylum issue, in a general context of tension over questions of immigration in Europe, linked to the 2015 European migration crisis.

The Digital Domain: Between Protection and Ambitions for Leadership, Julien Nocetti

Emmanuel Macron arrived at the Élysée Palace in what was, to say the least, a climate of tension fueled by digital technologies. The presidential campaign, and then the vote itself, had brought with it a growing consciousness of the phenomenon of fake news, in the wake of an American election where the problem had escalated into a national security issue.

Francophonie According to Macron, Hugo Sada

Since his election, Emmanuel Macron has thrown himself into promoting francophonie. “The teaching of the French language will be a priority of our diplomacy and our influence”, he announced in Tunisia in February 2018, insisting that there would be no budget cuts in this domain. A proliferation of declarations, announcements, and initial actions followed, leading up to a major speech given on March 20, 2018 on the occasion of International Francophonie Day.

France and Germany: Starting Over against a Background of Divergence, Hans Stark

The privileged partnership between France and Germany has always been slow to get back up and running following presidential elections. Emmanuel Macron’s predecessors have often been tempted to bypass Berlin so as to form alternative alliances, at least for a while. The new president has not yielded to this temptation. From the start he placed emphasis on a stronger cooperation with Germany.

Macron, Germany and the Relaunching of a Europe of Defense, Barbara Kunz

In Berlin the election of Emmanuel Macron was welcomed with much relief. Germany had hoped that the next French head of state would be both pro-European and ready to launch structural economic reform in his own country, and the new resident of the Élysée Palace fulfilled both criteria. But what did not necessarily feature on Berlin’s wish list was the new President’s ambition to relaunch a “Europe of defense”. Today cooperation on defense — both bilateral and within the framework of the European Union (EU) — is once more at the heart of the Franco-German agenda.

Trump and Macron: The Wager of Entente, Laurence Nardon

After a bumpy start, relations between Donald Trump and Emmanuel Macron have improved. Can we count on this yielding beneficial results for France, even though the Franco-American relationship remains structurally asymmetrical? Prospects for an entente cordiale between a populist, nationalist, and above all mercurial American president and a younger, intellectual, and rather liberal French president did not seem particularly auspicious. Their first meeting, in Brussels in May 2017, saw a robust handshake that many interpreted as the establishment of a tense relationship.

France and Russia: The Limits of Bilateral Cooperation, Tatiana Kastouéva-Jean

Clearly the Russian authorities did not bet on the right candidate in the French presidential elections of 2017, as was evident in their overt sympathy for the Republican candidate François Fillon and Vladimir Putin’s warm welcome to the Front National leader Marine Le Pen a few weeks prior to the presidential elections. Emmanuel Macron was meanwhile the object of a campaign of defamation and denigration in the Russian media. And yet the Russian president was the first head of state welcomed by President Macron when he took office, received at Versailles at the end of May 2017.

Much was expected of Emmanuel Macron on the Middle East, where the French presence is being undermined by an extremely conflictual and ever-changing situation. Every French president leaves his mark on this issue: after an offensive Nicolas Sarkozy, charged with neo-conservatism by his adversaries, François Hollande retreated, overwhelmed by the Syrian crisis which overshadowed the end of his term in office. France could hardly come to terms with the domestic, societal issues raised by the Arab springs of 2011, or adjust itself to the new power relationships within the region.

Macron and Africa: A New Approach for a New Era, François Gaulme

The first months of Emmanuel Macron’s five-year period in office have revealed two apparently contradictory but strategically complementary orientations in relation to Africa: the maintenance of the security-based approach of his predecessor in the Sahel, and the inauguration of a far-reaching reform of development aid. There is no better illustration of the current tendency in French-African relations than the symbolic importance taken on by Ouagadougou, the modest capital of the small landlocked country Burkina Faso. This was the city chosen by the new president as the place where, on November 27, 2017, he would declare to an audience of students his break with the “African policy of France”.

At the end of his first year in power President Macron’s Asia policy has yet to be outlined with any precision, priority having been given to Europe, and to a lesser degree Africa. Certain presidential speeches did however suggest that the broad principles of Macron’s foreign policies would also apply to Asia: a security that meshes with global stability; an independence that makes it necessary to rethink the terms of sovereignty, including European sovereignty; and an influence that goes hand-in-hand with defense and universal common goods.

Mitigating Geopolitical Risk – Japan as a Stabilizer in...
END_OF_DOCUMENT_TOKEN_TO_BE_REPLACED
Has the European Union risen up to the challenges of geopolitics? Europe after the Czech...