Skip to main content
You are here
Home > Migration and Citizenship

International migrations have become the focus of current public debates and policies in various regions of the world, including Europe. With the creation of the Migration Program in 2005 and then the Center for Migration and Citizenship in 2011, the French institute of international relations - Ifri was the first research institute to analyze migration and new practices of citizenship as a matter of international relations. In order to respond to a complex and polarizing issue, the Center for Migration and Citizenship aims at better shaping the debate and research with an independent and non-polemical approach. The Center’s work is directed to all kind of stakeholders active in the field of migration at the local, national, European and international levels: decision and law makers, authorities, not-for-profit organizations and the private sector.

Over the past few years, citizenship has been profoundly reframed by new anti-immigrant discourses in Western countries, focusing on national identity, multiculturalism, and Islam. During this period, citizenship has shifted from an issue of rights (civil, political, and social) to a matter of...

Since 2015, migration issues have been at the center of European debates and have been worsening divergences of opinion and tensions among Member States of the European Union (EU). The building of common asylum and immigration policies since 1999 has not prevented a series of crises on topics...

Observatory on Immigration and Asylum

Since 2015, the French asylum and immigration landscapes have been through major changes subsequent to the global mixed migration flows, European immigration and asylum policies, and increased citizen mobilization in the aftermath of the so-called "refugee crisis". In order to analyze theses...

More than 70 million people were forcibly displaced at the end of 2018. In that context, more safe and legal pathways to countries of asylum is a crucial challenge for the international protection regime. A toolkit is available to States and UNHCR, more particularly refugee resettlement.

Donald Trump’s election to the White House appeared to be the beginning of a profound change in the United States’ immigration policy. He reneged on bipartisan consensus that recognized the “positive contribution” of immigration to the country. This resulted in an increase in policies that...

Is the EU Better Prepared for the Next Migration Challenges? Politique étrangère, Vol. 84, No. 3, Autumn 2019

The European Union did respond to the massive influx of migrants in 2015, but with short-term measures, which have widened the divisions between member states.

Another Story from the "Refugee Crisis". Resettlement in Small Towns and Rural Areas in France Etudes de l'Ifri

Since 2015, refugee resettlement programmes have grown significantly in Europe becoming a key component of European asylum strategy. In 2017, Emmanuel Macron committed to resettle in France 10,000 refugees until the end of 2019. Refugees from Syria and Africa are increasingly welcome in small...

The “Global Compact for Safe, Orderly and Regular Migration” was adopted in Marrakesh on 10 and 11 December 2018, after 18 months of consultation and negotiation. It is presented as the first United Nations’ agreement on a comprehensive approach to international migration in all its aspects....

The Niger-Libya Border: Securing It without Stabilising It? Notes de l'Ifri, November 2018

Often described as an “ungoverned area”, the Niger-Libya border is nevertheless at the centre of major economic, political and security challenges. Both the Libyan authorities and the Nigerien state are struggling to establish tight control over this particularly isolated area.

Immigration: Europe in the Face of an Italian Crisis

Since the Italian election held on March 4th, 2018, immigration policy has become a hotter-than-ever issue both at national and European level. The Aquarius incident has brought to light the question of European solidarity regarding immigration issues.

How can we define Emmanuel Macron’s foreign policy since he took office? After Nicolas Sarkozy’s brazen style of “gutsy diplomacy” and François Hollande’s “normal diplomacy”, the eighth president of the Fifth Republic seems to have opted for an agile classicism. In substance, he makes no claim...

Since 2015 and the refugee crisis, the dialogue between the European Union (EU) and African countries on migration issues has assumed a new intensity.

In the week following Trump’s election, Ifri published a study to identify the likely changes in U.S. foreign policy. From the outset, this election appeared as a change in the U.S.’ trajectory, with consequences on the power relations and functioning of the international system.

Immigration in the EU and the US: Comparing Border Policies

The online registrations for this conference are now closed but you can still register by mail to Matthieu Tardis tardis@ifri.org

Division or Reconciliation: The Changing Political Agenda and Role of Think Tanks in the Next Decade? Council of Councils Twelfth Regional Conference

The 12th regional conference of Council of Councils (CoC) will take place at Ifri from November 17 to 19, 2019. An initiative of the Council on Foreign Relations, the CoC strives to define major foreign policy challenges by...

The 4x4 Directors Forum is an annual meeting gathering the directors of four European and four African Think Tanks to discuss current challenges that both continents are facing. The purpose is to identify common positions and asymmetries, and address possible areas of cooperation in order to...

Global Governance of Migration: A Challenge Beyond the North-South Paradigm GFMD Side Event

The global dialogue on migration is frequently stalled due to contradictory interests and positions between the countries of the North (Europe and North America) and the South.

From Local to National: Taking on the Challenge of the Reception of Immigrants and Citizenship

New waves of populism and identity politics have shaken Europe, in both the West and the East. They have made immigration, Islam and Muslims a source of tension and anxiety. These new discourses have not left the pact of citizenship unscathed. How could inclusive societies be established while...

Conference-debate with Arnauld Akodjenou, Regional Coordinator and Special Advisor for the South Sudan Situation for the United Nations High Commissioner for Refugees (UNHCR).

Protection of Refugees and Displaced Persons in Libya: A Challenge for the UNHCR

While France appears willing to take a strong leadership on European affairs, what influence would this new French leadership have on the EU’s immigration, asylum and integration policies?

Migration in East Africa: A Regional Challenge and a Global Issue

The arrivals of refugees from East Africa in Europe have continued to increase since 2015. However, this situation should not gloss over the fact that migration is mainly a regional phenomenon: East Africa, alongside Middle East, hosts currently more refugees than any other regions in the...

Immigration in the EU and the US: Comparing Border Policies

Both in the US and in Europe, border control has become one central component of immigration and asylum policies with seemingly the same objective: preventing irregular entries of migrants and refugees. This trend has accelerated in recent years, with ever stricter border controls, more...

By: Matthieu TARDIS, interviewed by ICMC

Smaller municipalities and rural areas can be places where refugees are welcomed and where they can integrate more easily. People living in rural areas are very proud of their towns and often make an effort to mobilize and include newcomers in their communities.

Integrating refugees: are small towns inventing a model for tomorrow?

By: Matthieu TARDIS, in the Quaterly Magazine of the Council of Europe Development Bank

Matthieu Tardis, Research Fellow at the Centre for Migration and Citizenship at the French Institute for International Relations (Ifri), describes how small towns and rural areas are welcoming refugees and enabling them to settle.

By: Matthieu TARDIS, , in the International Business Times, an article by Jess McHugh

The distance between Dover, England, and Calais, France, is only 30 miles. For migrants and refugees trying to cross from France to Britain through a tunnel underneath the English Channel, however, that... 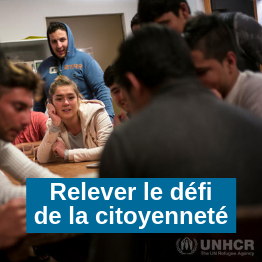