If Europe is unable to advance without the Franco-German engine, the European crises have demonstrated that the relationship between France and Germany cannot be considered as an immutable achievement – it has to be constantly maintained and enriched. A new generation, succeeding the post-war one, is now in command of Franco-German cooperation. The Franco-German Future Dialogue thus wishes to provide tomorrow’s decision-makers of both countries with avenues to meet each other and to exchange ideas.

At the same time, the French and Germans must interact with their European neighbors and reflect together on the challenges facing the European Union. That is why, as of 2014, the Franco-German Future Dialogue participants will resort to other European member states.

Franco-German Future Dialogue encompasses two major axes. It maintains a social network of young French and German professionals and PhD students, giving them the space to debate and exchange on Franco-German and/or European issues, as well as to develop a joint vision of the future and publishes research essays

The Dialogue participants are talented, budding “officers” (economic, political, scientific, cultural, administrative). All have a particular interest in their partner country, with which they have developed a strong connection through their professional or academic career.

The Cerfa has organised Franco-German Future Dialogue annually since 2007 in cooperation with the German Council on Foreign Relations (DGAP), and is supported by the Robert Bosch Foundation.

Find more information on the French and German page of this website, as well as the project's website.

Europe is divided in many ways. Brexit and rising nationalism are striking examples of this existing fragmentation. But what unites us Europeans? The Franco-German Future Dialogue 2019 has met fellow Europeans in thirteen member states of the European Union to discuss questions of identity. Do...

Sustaining Multilateralism in a Multipolar World. What France and Germany Can Do to Preserve the Multilateral Order Notes du Cerfa, No. 148, Ifri, June 2019

While international multilateralism is under strain, it is vital for France and Germany to defend it, since it is the most appropriate system for preserving their interests – particularly in terms of welfare, security, prosperity and environmental protection. Against this backdrop, three...

On 22 January 2019, French President Emmanuel Macron and German Chancellor Angela Merkel sign the Treaty of Aachen on “Franco-German Cooperation and Integration.” The document is set to complement the original Elysée Treaty from 1963, signed by President Charles de Gaulle and Chancellor Konrad...

The issue of the digital transformation of the industry provoked in France as in Germany the return of the state and the introduction of a subsidiary industrial policy. Feeling threatened in its industrial leadership, Germany mobilized its resources through industry 4.0 by building a vision...

What risks might the European Union be facing in 2027? Shaken by growing internal agitation as well as wider geopolitical developments, the European Union (EU) needs to redefine its role on the world scene while strengthening its core project. Integration has taken place on all...

This Workshop report was written by the participants of the French-German Future Dialogue 2016. It's the result of three seminars (Dijon, Lübeck, Alcala de Henares) on youth unemployment in Europe: Equal opportunities for European youth?

German agriculture is characterized by regionally different farm structures but in the midst of a transformation process. Rapid structural change is seen especially in animal production. Total production increased during the past decade due to intensification but the number of labour force... 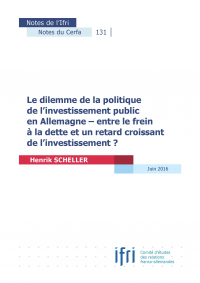 The German debate about public investment policyfaces a dilemma. The deficits in public infrastructure have grown considerably due to comparatively low investments in recent years. In addition, substantial investments for promising mega-projects, such as the energy transition (“Energiewende”)...

The Western Balkans : a touchstone for German and European foreign policy Notes du Cerfa, n° 130, May 2016.

Humanitarian exploit or failure? The refugee crisis in Germany and Europe Note du Cerfa, No.129, March 2016

By: Marcus ENGLER
Since the summer of 2015, an unusually high number of people seeking protection have come to Germany, mostly from Syria, Iraq and Afghanistan. Their arrival has become to the dominant political and societal issue. Over time, the discussion on how to deal with the refugees has become...
Publications - Notes de l'Ifri - Notes du Cerfa
Germany (Cerfa) - Franco-German Future Dialogue
Thursday 19 October 2017 to Sunday 22 October 2017

Third seminar of the French-German Future Dialogue 2017 in Warsaw

The French-German Future Dialogue 2017 was joined by ten Polish participants in Warsaw for a last seminar on the future risks for Foreign Policy of the European Union. The...

Opening seminar of the French-German Future Dialogue 2017 in Nantes

Five days after the French presidential elections the eleventh yeargroup of the French German Future Dialogue met for their first seminar on the Loire banks in the French city of Nantes. Main discussion topics included the elections in 2017 and Foreign EU poliy.

The seminar is part of the "French-German Future Dialogue", a project of the German Council on Foreign Relations (DGAP) and the French Institute of International Relations (IFRI) with the support of the...