Oil and gas resources of Middle East and North Africa: a curse or a blessing? 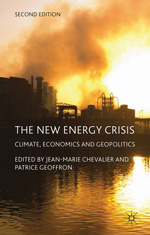 Global warming reveals that the current evolution of the world consumption is on an unsustainable path. Humankind's insatiable appetite for energy has sparked a new crisis. In a world where climate change has become a proven reality, there lies a deep uncertainty about the physical, economic and social impacts of this phenomenon. The New Energy Crisis examines the impact of climate change issues into energy economics and geopolitics. Climate is a public resource that needs to be universally managed. The world economy has become global, but world geopolitics has not. Nations are still here, defending their wealth, their local interests and their ambitions.

This book follows a regional approach to improve our understanding of the dynamics of a multi-power world. Each region has its own specifications in terms of resource endowment, history and sensitivity to climate change. For millions of people economic growth is a priority, meaning increased energy consumption. The aggravation of global warming emphasises the cost of inaction at Copenhagen or Cancun, while the financial crisis engulfing so much of the world increases the energy demand of emerging countries, exacerbating economic and geopolitical tensions. This book offers a concise view of what is in store for our future, and proposes that the real challenge of the century is to reinforce world governance to overcome this crisis. Solidarity between nations, people, and generations is the key.

Patrice Geofronn is Professor of Economics at Paris-Dauphine University, France. Formerly international Vice-President of Paris-Dauphine, he is now Director of the CGEMP (Research Center in Energy and Raw Materials Economics) and President of the advisory council of the Climate Economics Chair. He regularly assists European energy corporations on strategic and regulatory issues and is economic expert for the International Center for Settlement of Investment Disputes (World Bank). He has been awarded a PhD in industrial organisation, and has recently published volumes on climate friendly energy systems and competition in network industries.Patrice Geoffron has been invited professor at the University of TodaI, Tokyo, and the University of Fudan, Shanghai. He is a member of the editorial board of the Journal of Management and Network Economics.